I thought I had reached the end of the game when the developers surprised me and whipped out another new chunk of content to get through. To be perfectly frank, I think I was ready for the game to be over. I'm a little concerned now that it might overstay its welcome.

Still enjoying it so far, though… the writers have done a really bang-up job in clearly illustrating Riddick's character. I may not like what I see and I may not agree with it, but there's no doubt that he feels very consistent and well-defined. In this respect, they've done better than I expected, and the rest of the story has been above-average as well.

Brutal, dark, and certainly heartless at times, but above-average. 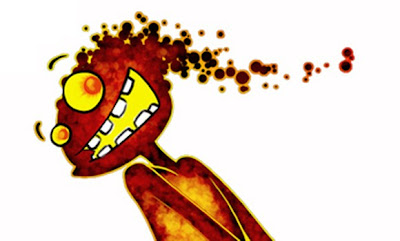 Dark Athena aside, I'm still chipping away at Emergency on the Nintendo DS and I just downloaded 'Splosion Man (XBLA) from Twisted Pixel.

Heard nothing but good things about it, so I'm very much looking forward to starting it up.

I loved Dark Athena. I actually enjoyed it more than Butcher Bay, which I also loved. I thought Dark Athena was more focused, with more polished action. The exploration and subquest elements aren’t really there, which is a bit of a con, but it’s a trade off for more intensity, not limited to some really awesome boss battles. The balance between stealth, melee and action and the freedom that you have in that regard is still pretty impressive.

I am currently playing through Escape From Butcher Bay. Like I’ve said before, I have played the game on the original Xbox but I find it very difficult to go back to. This version cleaned up rather nicely. Its interesting to note how far I had gotten versus how far I thought I got. I didn’t complete the game. One of those ‘I bought another game that took over my time and never found time to go back’. There are times that I swear I had never visited a place, then I get into a familiar area and I get… Read more »