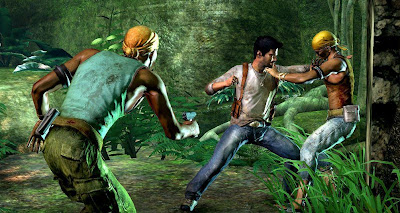 I played it for a bit when it first came out, but it rubbed me the wrong way and I tossed it aside. I was quite surprised to have that reaction, really. I was a big Crash Bandicoot fan when ND was still producing it, and had a very good time with the Jak & Daxter series. I expected great things from Uncharted, and at the time I felt like it really didn't deliver. Didn't even bother finishing it.

While skimming through Metacritic the other day I came across the Uncharted breakdown and was a bit surprised to see it that rocked an 88. Now, although I will be the first to admit that my taste doesn't always run parallel to the majority, that number seemed a little high to me, and being the Naughty Dog fan that I am, I felt like I should give it another shot. Maybe I just wasn't in the right frame of mind, or perhaps Saturn was out of alignment, or something. Who knows?

I'm toying around with the idea of doing a review for it, but I'm still sort of stunned that it's just not nearly as enjoyable and well put-together as it should be. The characters are pretty generic, the puzzles and platforming are lightweight, there's at least twice as much gunplay as is warranted (the pop-out-endless-wave-of-enemies kind), and in general, there's not really a lot of heart. I kind of get the sense that the developers were trying to bowl everybody over with the visuals, hoping no one would notice how insincere and hook-free it is. Looking at that Metacritic score, I guess their strategy worked.

I'll definitely finish it this time just to say that I did, but I certainly wouldn't ever hold this up as an example of a great game—although considering how weak the PS3's exclusives library is, I can see how some people would position it as one.

Preach! Too long and too shooty with horrible controls.