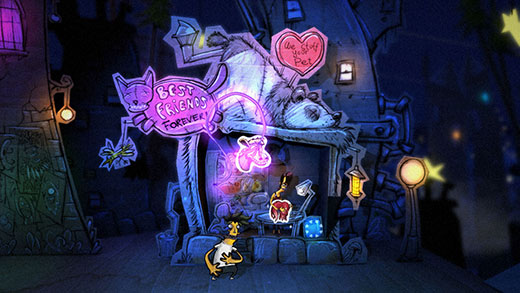 HIGH The writing is archly funny throughout.

LOW Repeating the ‘get past the guards' sections multiple times.

WTF The NES Silver Surfer? Really? The music's great, but…

Titles are important.  They should be catchy, descriptive, and otherwise grab someone's attention.  They need to make something stand out amidst a sea of competition.  The right title can mean the difference between clicking for more information, or passing it over without a second glance. Stick It To The Man is a disappointingly non-descriptive title for something as sharply clever as this, but once past it? Great stuff.

Best described as a point-and-click adventure with a tiny bit of platforming action thrown in for flavor, Stick It To The Man to tells the bizarrely twisted tale of Ray, a hardhat tester in a papercraft world who ends up with a telepathic alien inside his skull.  Thanks to this unexpected tenant, Ray has an enormous pink tentacle sticking out of the top of his head.  However, it's more than just decoration.  This tentacle allows him to read people's minds and swing from push pins in his paper-based environment, Bionic Commando style.

Using the tentacle to move around the 2D levels is amusing and comes in handy to get away from bad guys on the hunt for Ray's alien, but the meat of the game is reading the minds of characters in the world and figuring out what they need to resolve their particular issue.  Since each level (ten in all) is completed by helping people out, the puzzle-flavored play boils down to a string of item-exchanges. Person A has an item that Person B needs, but that item can't be acquired until Person C is satisfied, and so on.

The gameplay is simple and straightforward, but that's not a negative.  I enjoyed the concise formula, and it was never bogged down with extra stuff that it didn't need.  No, the entire experience exists in service to the writing, and keeping the focus there was a wise move because both the scripting and the voice work is top quality stuff.

Every character in Stick It To The Man seems a little grotesque on the outside, and once Ray uses his tentacle to read their minds, he finds that they're usually just as twisted on the inside.  Dark humor is the order of the day, and I adored that the writers ‘went there' just about every time I wanted them to, but didn't think they'd dare.  From awkward conversations between parents and children to stuff a person suspects their partner really thinks, the dialogue provides commentary in a blisteringly honest way.  It's surprisingly direct more often than not, and the laughs it coaxed from me were genuine.

Stick It To The Man is a short, uncomplicated project that lives and dies by the quality of its writing, and to its credit, that writing is strong enough to support the entire experience.  Players curious enough to check it out despite the blandness of the title will find a humorously intelligent game that's not afraid to say exactly what's on its mind… with a little help from a long, pink tentacle. Rating: 8 out of 10


Disclosures: This game was obtained via publisher and reviewed on the Vita. Approximately 5 hours of play were devoted to the single-player mode, and the game was completed. There are no multiplayer modes.

Parents: According to the ESRB, this game contains: Violence.  Although there are no sexual situations or any instances of salty language, there's no question that this game is aimed at mature audiences.  Some of the subjects that come up in the dialogue are surprisingly straightforward or heavily sarcastic.  Much of this will be lost on younger players, but the fact remains that it's m to ore appropriate for big people.  The violence is limited to the main character getting tazed by guards, and one person who accidentally shoots themselves in the chest.  The art style is fairly dark, but it's not particularly graphic in terms of violence.

Deaf & Hard of Hearing Gamers should have no problems.  All dialogue is subtitled and there are no auditory cues necessary for gameplay.  The music does shift when Ray is seen by enemy guards, but there's also a visual cue that occurs at the same time, so players not able to hear will still be aware of the impending attacks.