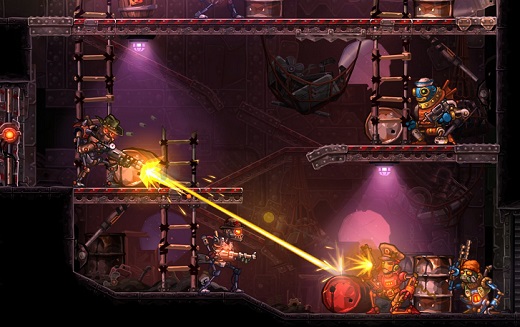 LOW The bomb-making robots are a complete pain in the ass.

WTF Is nobody gonna ask about the fleshy bodies in those tubes?

Heard of Image & Form? Unless you've played their iOS titles or came across SteamWorld Dig, a 3DS gem from 2013, the answer is likely ‘no'. That should change, though, because these folks are doing some outstanding work.

Their latest is called SteamWorld Heist—it's turn-based ship-boarding strategic combat starring a cast of robots in space, and it all happens on a 2D plane. From a description like that it sounds like a random jumble of ideas that shouldn't work, but much credit goes to the people behind it. Not only did they bring all of those elements together, they turned the final product into one of the strongest 3DS games this year.

Although it's set in the same universe as Dig, Heist has no story or mechanical connection to the previous SteamWorld. In this new tale, a steampunk shipcaptain named Piper and her crew are eking out a living by smuggling under the noses of an empire that's making life hard. When the empire starts cracking down, Piper and company take matters into their own hands to fight back.

Although the writing has more than a few genuine chuckles and the crew are a likable bunch of oddballs, there's not really much story to think one's teeth into. It's serviceable, but ultimately, not the point. No, the main reason to play Heist is for the action, and it delivers.

At the beginning of each level, the player will fly their ship to a space station, enemy ship, or some other hostile object in space. It docks, and the crew disembarks for combat.

Each area is fairly small, and the developers have predetermined how many crewmembers can go out on each mission. There are a few solo excursions for a lone soldier, but the majority require two or three characters, and the maximum is four.

Each squaddie unlocks unique skills as they level up, and they all use different sorts of weaponry. Piper is a sharpshooter, so her guns come equipped with an extremely helpful laser sight. She can also inspire (read: buff) her teammates and heal them.  First mate Seabrass uses shotguns or assault rifles, and he deals extra damage when he's mad. The rest of the crew follow along similar lines with a variety of weapons and talents. There's also plenty of extra gear for those who like to customize.

Since not every gun has a laser sight, those without have to be aimed manually and things in the environment must be taken into account—will a grenade's arc reach a distant foe? Are there barriers blocking line-of-sight? Trying to ricochet off of angled surfaces to tag well-defended enemies is also a totally valid approach. It leads to a good amount of tension as the success of a single shot can often mean the difference between bringing home the loot or reloading a save.

Everything about the combat is streamlined and accessible, yet it never feels dumbed-down. Heist is exactly the right size and level of complexity for something meant to be played on the go, and Image & Form have a dead-right sense of what works for portables. I had a great time switching team members around and trying different abilities, and with each level being bite-sized, my sessions never felt overlong and it's easy to put down and come back to later, which is a huge plus for a portable in my book.

Boiling something down to its core without losing the things that make it good is a difficult task, but the developers make it look easy. This is the friendliest, most approachable tactics game I've seen in a while, and it's a credit to the 3DS. Although Image & Form may not be a household name yet, if they keep turning out games of this quality, it won't be long before they will be. Rating: 8 out of 10

Disclosures: This game was obtained via publisher and reviewed on the 3DS. Approximately 14 hours of play were devoted to the single-player mode, and the game was completed. There are no multiplayer modes.

Parents: According to the ESRB, this game contains: fantasy violence and mild language. Don't be concerned, this game is as tame as they come. I can't even recall a single instance of language, and although the game does feature guns, it's robots shooting robots with not a single drop of blood in sight. Pretty harmless.

Deaf & Hard of Hearing: No problems at all. I played the majority of the game with the sound off, and had zero issues. All dialogue is relayed via text and everything is accessible.