Get to the Bottom of This 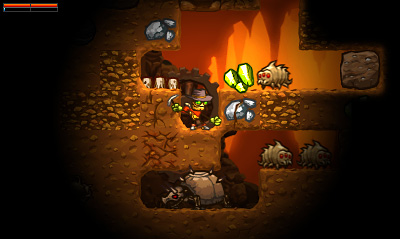 LOW It takes just a hair too long to get teleportation.

WTF Why didn't Nintendo give this a bigger push?

I've said it before and I'll say it again—there are few things I enjoy more than coming across a game I know absolutely nothing about, and then finding out that it's great. Such was the case with SteamWorld Dig from Image & Form. I was a little hesitant to do another blind purchase after a few recent disappointments on the eShop, but I took the plunge and I'm glad that I did. It's a real gem.

SteamWorld Dig puts the player in the shoes of a robot who's just inherited a mine from his recently-departed uncle. The local residents suggest that the mine may be more than a simple hole in the ground, and it's up to the player to get to the bottom of it, both literally and figuratively.

It's a fine enough premise, but the story elements are only part of the experience. The real draw to the game is its unique combination of resource gathering, platform-lite navigation and a steady sense of progression that keeps things moving forward. The overall design is also tightly compact and streamlined in the best possible sense.

The mine itself is accessed from the center of town (just a couple of shops and townsfolk, really) and it's shaped like a giant cylinder—relatively narrow horizontally, but quite deep vertically.

Once inside the mine, the player is free to dig in any direction, but the catch is that the tunnels are permanent. It's necessary to excavate in such a way as to leave a climbable path back to the surface, but the robot can easily wall-jump in order to ascend. As long as the player doesn't get too dig-happy, it gives the tunneling a pleasant sense of significance without becoming something that needs to be agonized over. 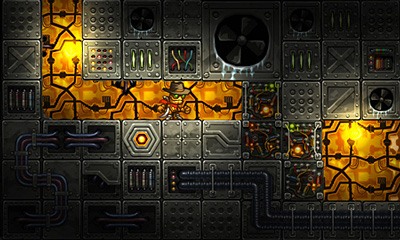 As the player gets further and further from the surface, things will start to be uncovered—chunks of precious ore, small caves which act as mini-levels separate from the main mineshaft, creatures to be defended against, and other curiosities.

It's all very simple and straightforward, but that's certainly not a bad thing. I derived a good deal of satisfaction from collecting every bit of ore that I could reach, and the upgrades and new abilities (some purchased, some unlocked) keep things fresh. For example, just when the robot's pickaxe starts to fail against tough bedrock, a more powerful rock-busting drill enables his continued descent.

Although SteamWorld Dig kept me happy from start to finish, that's not to say that it doesn't need a bit of polish here or there.

The issue that sticks out most for me is that high-end upgrades and time-saving teleport devices (used as shortcuts back to town) both require special orbs buried in the mine. These orbs were too rare at the beginning, and then became too common at the end. Although this may have been a result of the way the game randomly distributes items underground, I wouldn't have minded if the orbs were done away with and everything was available as a straight cash purchase.

Apart from that, there were a few times early on when my robot's light source ran out of juice and things got a bit dark down below. I don't think much is gained by asking the player to manage the fuel for this light considering that the bulk of time is spent underground, but it wasn't a huge problem.

While digging in a hole might not seem like the most entertaining thing to do in a game that's doesn't have "craft" in the title, SteamWorld Dig successfully delivers its own unique style of subterranean gameplay thanks to a great balance between managing the mine, chasing upgrades and having just enough story to keep me curious without getting bogged down in too much lore. It's exactly the kind of thing that feels like a perfect fit for the 3DS, and I sincerely hope that a sequel is on the way. More, please! Rating: 8.0 out of 10.

Disclosures: This game was obtained via paid download and reviewed on the 3DS. Approximately six hours of play were devoted to the single-player mode, and the game was completed. There are no multiplayer modes.

Parents: According to the ESRB, this game contains fantasy violence. The only violence here is a cartoonish robot whacking big bugs or underground hillbillies. It's quite tame, and not graphic in any way. There is no sexual content nor questionable language.

Deaf & Hard of Hearing: You won't have any problems. All dialogue is provided through text, and there are no auditory cues necessary for gameplay. It's totally accessible.