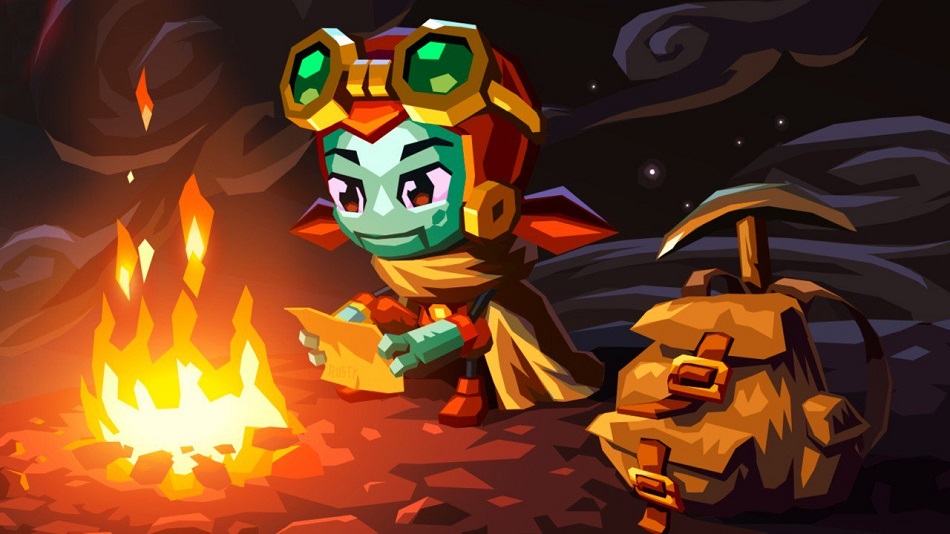 HIGH A jetpack and a grappling hook!

LOW Some of the caves stumped me for far too long.

WTF Does the ending mean what I think it means?

There are few studios who I would say have never made a bad game, but Image & Form is among them. They first came to my attention with the excellent SteamWorld Dig in 2013, they followed it up with the every-bit-as-good SteamWorld Heist in 2015, and now they’ve delivered SteamWorld Dig 2. Spoilers: it is also great.

The premise is simple. Protagonist Dorothy is searching for Rusty, the star of the first Dig. He’s disappeared, but the rumor is that her hero is at the bottom of a huge, complex mine. Naturally, Dorothy grabs a pickax and heads below the surface to find and/or rescue him.

Gameplay is as simple as the premise, although I mean that in the best possible sense because everything about Dig 2 is streamlined, sensible, and friction-free.

At the outset of the adventure, Dorothy’s pickax is shabby and her light source runs out of fuel too quickly. There’s not much she can do besides extract a few gems from the soft dirt she’s digging down into before climbing back up to sell them for cash. 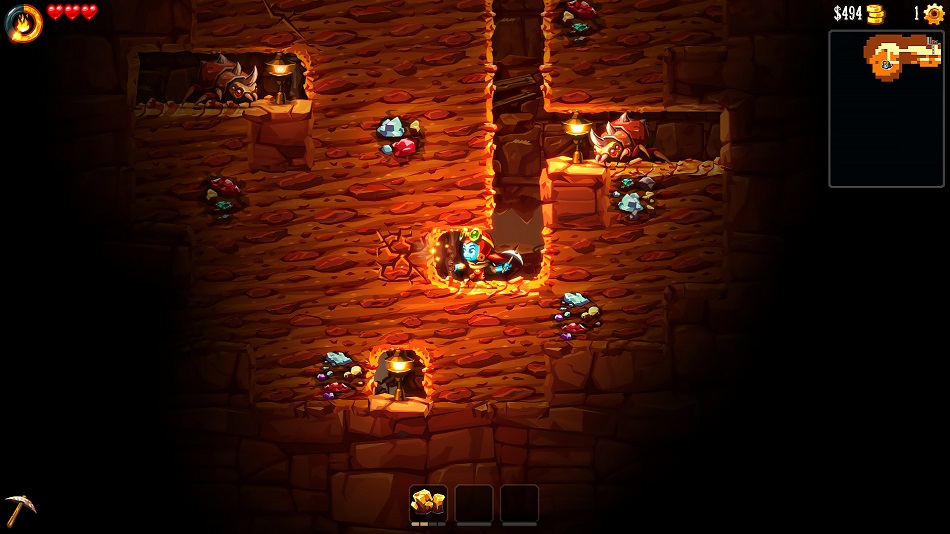 It’s slow going in the beginning, but the power curve ramps up quickly. After a few loot hauls and a few purchases at the upgrade shop, Dorothy becomes a much more capable character – a jackhammer! Protective boots! Gem magnets! — and things start humming.

While the first section of the mine is basically about digging downwards, it’s obvious that there are side areas with new twists that Dorothy can’t immediately access. So, following in hallowed tradition, she will return to these places when she’s got the required gear – things like a flaming pickax, a grappling hook, a jetpack, and more. Eventually, there won’t be a single nook or cranny that she won’t be able to get into.

The adventure unravels marvelously with a few nice surprises, the world opens up to be a large space that’s easily traversed thanks to convenient fast-travel, the graphics are bright and colorful, the controls are smooth and precise, the menus are clean and easy to understand… Everything is thought through and well-considered, and the result is silky-smooth and playably butter-licious. In fact, I have few criticisms of SteamWorld Dig 2, and the things I’ll mention are small potatoes.

One aspect I wasn’t entirely crazy about was Dorothy’s character design – it’s not bad, but it wasn’t as perfectly cute as previous protags have been. Also, her sidekick doesn’t feel well-developed, and the connection between them isn’t strong. While the game is clearly not going for heavy, emotional beats, there were times when I felt the script missed a trick or two and could’ve reached a little further.

Frankly though, these are incredibly minor dings on a project that’s as successful as any developer could hope to be. SteamWorld Dig 2 is adorable, polished, smart, and basically nails everything that counts. It’s a joy to spend time with work like this, and all I can say to Image & Form is…. Well done! Rating: 8.5 out of 10

Disclosures: This game is developed and published by Image & Form. It is currently available on Switch, PS4, and PC. This copy of the game was obtained via publisher and reviewed on the PS4. Approximately 8 hours of play were devoted to the single-player mode, and the game was completed. There are no multiplayer modes.

Parents: According to the ESRB, this game is rated E10+ and contains Fantasy Violence. This game is as safe as they come. No sex, no salty language, and the “violence” is whacking goofy monsters without any blood or graphic imagery. It’s kid friendly in all respects, have no fear.

Deaf & Hard of Hearing Gamers: All dialogue is presented via text and there are no significant auditory cues. It’s fully accessible.

Colorblind Modes: There are no colorblind modes available in the options, however, the developers do include the option to disable flashing in the game for those who may be photosensitive.