This Trotmobile needs a serious tune-up 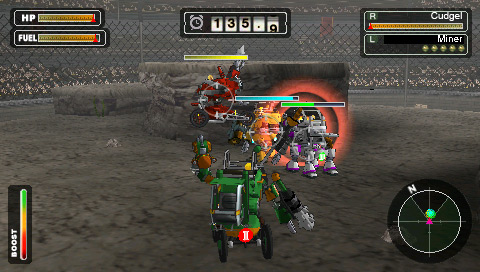 LOW How often the player has to sit through clunky, unnecessary bother.

WTF How did the Crayola-level character art make it into the final product?

Reviewing a game like Steambot Chronicles Battle Tournament is tough. It's not difficult in the sense that it taxes my skills as a critic or that it's a complex project requiring research or meditation on what the developers intended. No, it's difficult because I really wanted to like it, but there's so much wrong here it's as though the game is actively trying to push me away.

Taking a global view, the game as a whole suffers from being incredibly clunky, slow, and completely failing to provide the player with a smooth and intelligent experience. Tedious in every aspect, I found it trying my patience thanks to the amount of time wasted on things that shouldn't even be an issue—things like the robot's sluggish walking speed, an overlong cut-scene before a boss that can't be skipped, and a dozen other irksome things in need of polish. Minor irritants aside, how the player uses the robot (called a Trotmobile) to navigate the city is the most endlessly annoying way Steambot Chronicles Battle Tournament stumbles over itself.

In order to make any progress, players must earn money and "fame"—two commodities granted by completing jobs offered at a local employment agency. It sounds simple enough, and it should be. However, this core aspect of the Steambot Chronicles experience is totally botched by making the player put up with a horrifically cumbersome system of mobility. Bear with me here… 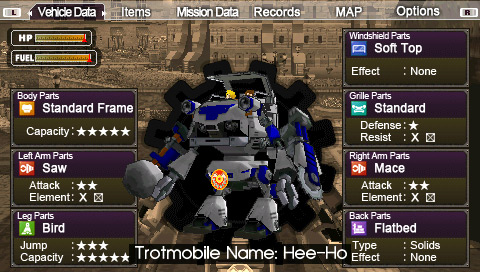 In order to get a job at the local agency, the player must leave their Trotmobile and actually enter the building. However, instead of letting players get on and off of the Trotmobile at will, they must first find a "parking cone" and exit. At that point, they must walk to the agency, enter, select a job, exit, re-enter the Trot, and then walk to the person who's actually "offering" the job elsewhere in the city.

About half of these job-giving people can be spoken to from the Trot, but for the other half it's required to again find a parking cone, exit the robot, and then walk inside a building to confirm the job. With parking cones few and far between, this means it's often necessary to park a short distance away from the actual destination and hoof it both to and from the cone.

Once the job is again confirmed (basically clicking a button once or twice with no real significance), the player goes back to the Trot, then actually walks it to the location where the job is taking place, performs the job, walks or drives back to the person who confirmed it, then again parks and exits the Trotmobile before going back to the agency to collect the reward.

It took me two hundred words just to describe the process, and believe it or not, typing these paragraphs up took a fraction of the time it takes to actually perform this sequence in the game. Doing that Rube Goldberg-ian jog once would be bad enough, but the player will be required to complete dozens of jobs over the course of the adventure. It didn't bother me at first, but being forced to suffer the stupidity of the design over and over and over again became a sick form of torture before long. 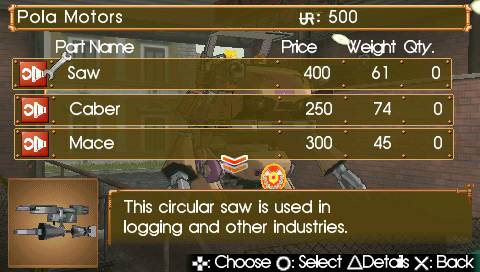 Making things worse, the jobs themselves are completely brainless and uninteresting—and oddly, very few of them actually involve any sort of combat. Instead, the developers somehow thought that delivering newspapers, hauling wood or interviewing local people (yes, interviewing) would make for juicier missions than something more action-oriented. I mean, the player drives a large robot built for combat, so what sense would it make to actually use it, right? After doing a few of these menial gigs, I made an effort to save my sanity by simply repeating the easiest, quickest ones. Once I had the bare minimum fame and money necessary, I avoided these obnoxiously dull jobs and just pushed through to the end.

Although it would be easy to write the entire game off as a failure, I have to admit that one of the game's bright spots was the addiction of mixing and matching different parts for my Trotmobile. There's a fairly decent amount of weaponry available (each with several levels of potency) and there are enough legs and torsos to make this tinkering more than just a gimmick. The old Armored Core addict in me took delight in this aspect of Steambot Chronicles Battle Tournament, but it was so distasteful to complete jobs and earn the money needed for bits that the enjoyment I'd usually get from exercising my gearhead tendencies was effectively squashed.

While the robo-fan in me kept pressing forward in the hopes that tweaking the Trotmobile mods would carry me until the game got better, it never did. The job/money system is so repetitious and unsatisfying that it seems aimed squarely at keeping young children occupied, but the actual combat in the tournament is cheap and difficult to the point that no child could ever play it. Too many aspects of the game have an unfinished, rough feeling where there should be efficiency, and frankly speaking, Irem misses every mark substantially and consistently. Instead of the friendlier, less-confusing version of Armored Core this UMD could have been, it's a bitterly disappointing also-ran that's in severe need of a tune-up. Rating: 3.5 out of 10.

Disclosures: This game was obtained via publisher and reviewed on the PSP. Approximately 8 hours of play were devoted to the single-player mode, and the game was completed one time. No time was spent in multiplayer modes, although a four-player/one-UMD option is offered.

Parents: According to the ESRB, this game contains alcohol reference,mild language, mild fantasy violence, and suggestive themes. Despite all these disclaimers, the game still ranked an E10, so that should tell you how mild it is. The only violence is clunky robot on clunky robot without any blood, and the only suggestive themes I noticed were some unintentionally humorous lines of text that occurred when the writers neglected to change the script in the event the player chooses a female main character. I would be totally fine letting my own child play this game, so parents shouldn't be too worried.

Deaf & Hard of Hearing: You shouldn't have any difficulty. All dialogue in the game is accompanied by text, and although the game is played in real-time, the action is so slow and deliberate that there is never any need for audio cues. Any pertinent information is displayed on screen, so there aren't any audio barriers in the title.