New Life in the Old Corpse 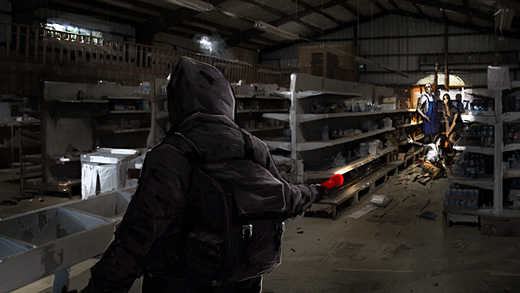 HIGH Setting up my first outposts to establish a (semi) safe zone.

LOW A tough mission rendered unfinishable by a glitch-out.

WTF Why the hell does the game advance when I’m not playing?

There's no doubt that zombies have been overdone lately. It seems like every third release has a zombie mode, zombie downloadable content (DLC), or some other undead content. The growing degree of player burnout is easy to understand.

In spite of this flood, I've remained convinced that developers haven't fully explored the subject—too many titles are straightforward shooters or pure action. A few have taken more thoughtful approaches, but almost none have attempted to simulate survival with more than a cursory level of detail.

State of Decay from Undead Labs changes all that.

For anyone (like me) who's always wanted a game to tackle the same sort of omigawd-hurry-up-and-board-that-window-nooo-run-run-aaaaughhh scenario that’s so commonplace in zombie-related books and film, State of Decay is it.

The experience begins with two friends coming back from a camping trip deep in the wilderness. Returning to civilization, they’re shocked to find that the undead have appeared, everything has gone to hell, and society has fallen overnight. The friends make their way to a nearby ranger station where other survivors are gathered, but there's little comfort to be had…

From this small station in the woods, State of Decay quickly reveals itself to be the biggest, most complex Xbox Live Arcade (XBLA) game ever released; it’s an open-world survival simulation that blends the up-close experience of real-time third-person action with larger, more expansive aspects of managing a community of survivors and the resources necessary to sustain them. This scope encompassing both micro and macro is incredibly brave, wildly ambitious and entirely successful, although there’s no limit to the number of areas in need of polish.

Speaking of which, let's get the ugliness out of the way first: State of Decay is rough. Really rough. Zombies clip through doors, fences, and other solid objects. The framerate is serviceable at best and frequently takes chunky hits, and the graphics are pretty crude by modern standards.

Other issues are less obvious. For example, it’s baffling that there’s no way to recruit other survivors to form a group, forcing the majority of missions to be done solo. Many key aspects of play don't have adequate tutorials (it takes too long to discover what down on the D-pad does) and as of this writing, the developers are in the process of patching a problem that causes panic and stress at home base when no threat is anywhere near.

With the kind of issues I just mentioned, readers might think that State of Decay is something to be avoided, but that's not the case at all. In fact, it's one of the best games I've played this year. The strength of the core design and the vision that the developers have been working towards is so on-target and correct that it's impossible to avoid being sucked into the world they've created.

In State of Decay, zombies have poor eyesight, but keen hearing. The slightest disturbance will attract undead in the area, so when the player is in the field to search for supplies or scout territory, they’re constantly under stress to remain as quiet as possible. Compounding this tension, taking one or two zombies down is no problem, but even a small group of undead can overwhelm anyone. In this game, caution is king, and there are many tense moments spent crouching and holding absolutely still, or taking an extreme detour in order to avoid an area filled with the game’s "zeds."

It's also important to note that players don't control just one character, but frequently switch between any able-bodied member of the community. Characters quickly become fatigued from running or fighting and injuries or sickness are common. Cultivating a strong roster is important because any death is absolutely permanent, and if they fall, there’s no way to get them back. In this game, even the most mundane mission feels like a high-risk affair.

However, this sort of in-the-trenches stuff is only part of the package. State of Decay’s simulation aspect is excellent, and will have players busy trying to keep their base of operations stable and healthy. It’s refreshing to find that locating badly-needed medicine, scavenging for building materials and shoring up relations with nearby survivors are tasks that are just as vital as killing zombies, if not more so. 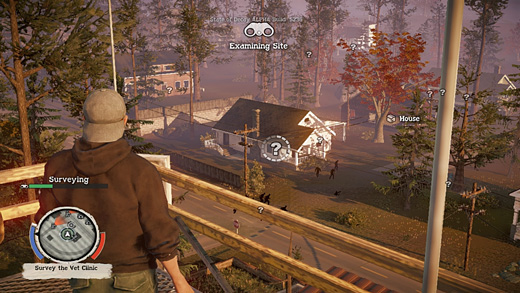 In fact, the amount of work that's gone into constructing this surprisingly-detailed ecosystem is incredibly impressive, and doubly so for being an XBLA title. After all, I doubt many games would try to incorporate personality clashes and infighting on top of the numerous systems already in place, but they’re there. That brusque redneck watching the perimeter might be good with a rifle, but is the trouble he stirs up worth tolerating? I also enjoyed choosing which facilities are built (which is more important: more beds or a training room?) and items in the world are finite. There are only a certain number of cars to be had, so playing GTA-style and totaling vehicles will come back to bite the player when they need fast wheels and there aren't any to be found.

With all of the sharply intelligent, interesting things happening in State of Decay, it's easy to excuse the production jank and weirdness that crops up. What I can’t excuse is the way the game’s world progresses when it’s not being played. It must be a holdover from the days when State of Decay was being structured as an MMO, but in-game time continues even when the console is turned off.

For example, during one session I left my characters safe at home and had a stockpile of resources ready to go before shutting the game down for the night. I wasn't able to come back to it for two days, and when I did, I had three characters missing, one was sick, and my resources were gone.

Although I've got nothing but respect for State of Decay, I'm of the opinion that this "things keep happening" mechanic has no place in a single-player experience of this kind. I don't mind dealing with bad things as they happen when I'm sitting in front of my TV, but the current system feels like a punishment for stepping away from my 360 to take care of real-world responsibilities, and it adds nothing beneficial to the experience.

While every aspect of this action/sim hybrid needs more polish and it’s bitterly disheartening to come back to a disaster when everything was just fine the night before, it's impossible not to admire the brilliant concepts at work here. Undead Labs has taken a stale, tired premise and managed to ignite it into one of the most engaging things I've played this year, and that's no easy trick. For anyone even remotely interested in what might be like to survive the zombie apocalypse, State of Decay is an absolute must-play. Rating: 8.5 out of 10.


Disclosures: This game was obtained via publisher and reviewed on the Xbox 360. Approximately 16 hours of play were devoted to the single-player mode, and the game was not completed. There are currently no multiplayer modes, although a co-op mode has been rumored for the future.

Parents: According to the ESRB, this game contains: intense violence, blood and gore, sexual themes, partial nudity, drug references and strong language. I'm pretty sure that's every warning the ESRB can possibly attach to a single game, and they're not wrong to do so. Although everything in the game is totally appropriate in its context, there is no doubt that this game is aimed at mature fans looking for an intense horror-themed experience. Keep the young ones away.

Deaf & Hard of Hearing: Although most aspects of the game are fine thanks to quite a bit of information being displayed-on-screen, the one area that might cause a problem is that zombies which are not in "pursuit" mode do not show up on the mini-map. Players with normal hearing will be able to pick up on groans and other sounds that might give away their presence, so anyone with a hearing impairment will have to be extra diligent about scanning the area before making any noise while searching for supplies, etc.