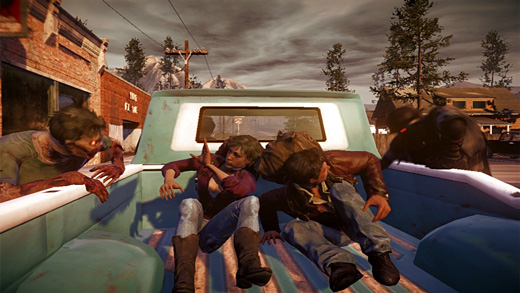 Before PAX Prime opened its doors, there were a few events happening in Seattle. One such event was a preview for an upcoming XBLA/PC game called State of Decay. The developers, Undead Labs, were kind enough to extend an invitation to see the Alpha build, and I was glad to accept.

I didn't know much about the game other than that it was an open-world, third-person title about surviving a zombie apocalypse. A quick look at one of the trailers got me incredibly intrigued, and after having the chance to talk with several of the people responsible for creating the game, I got even more fired up.

There's a lot to discuss with regard to State of Decay, but the first thing that's important to note is that it takes a much different approach to its zombie theme than most of the competition. Although I can certainly understand some players feeling burned out on the undead, I would say that very few games which feature zombies have attempted to address the survival aspects of the concept in a cursory fashion, much less in any substance. State of Decay bases its entire experience around it.

The game takes place in a huge tract of land with two central towns and numerous other areas to explore. Although it's officially set in "Anytown, USA", it was suggested that the team took some inspiration from Eastern Washington state—a hot, dry, rural area that stands in stark contrast to the tech metropolis currently booming underneath the Space Needle.

The player is free to go absolutely anywhere on this map, and every building on it can be opened and entered for the purposes of exploration, hiding from the undead, or scavenging for supplies. Scattered cars can be commandeered for faster travel, but characters are easily able to scale slopes, hop fences, and otherwise move in a natural, logical fashion through the landscape. 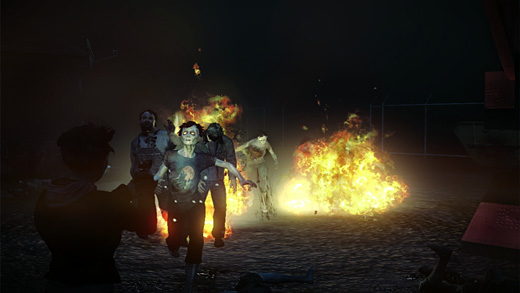 As the player explores, they will come across survivors. Some will be friendly and some not-so-friendly, but at this point, there are reportedly no hostile human factions to contend with, just the undead. After meeting people, the player has to build relationships with them before they can be recruited. Once trust is established, the player is able to switch from their original character and take control of them.

I was quite curious about this player-swapping, so after a few more questions, it was explained that State of Decay takes a "community" approach. Rather than investing in any one particular character, the player is encouraged to take turns with each member of their group in various ways. The most obvious one is that each character has a limited amount of health and stamina. Frequent activity will drain this, and it can only be replenished by letting that character rest. To continue playing, a fresh character must be put into action while the exhausted one hits the hay.

Another interesting way of encouraging these other characters to be used is that they each have varying skill sets. While the combat-centered former soldier is sleeping in the barracks, the former gardener can tend the vegetables in a guarded safe-zone planting area to increase the food supply available to the group. Another character may be great with carpentry, another may be a faster runner, and so on. While many skills are common to all characters, there will definitely be an advantage to putting those with special aptitudes on work details which suit them.

This brings me to what is probably the most unexpected and fascinating part of State of Decay—the sim aspect.

Once a sufficient number of people have been returned it into the group, the player can assign them different roles in a variety of locations. Some can tend the safe houses and outposts which are built by the player, some can staff clinics, some can help research new weapons and generate ammunition, and so on. For the community to survive, it will take more than one gung-ho hero chopping heads off of the undead to win the day. In this game, every able hand must pitch in, and the player controls it all. 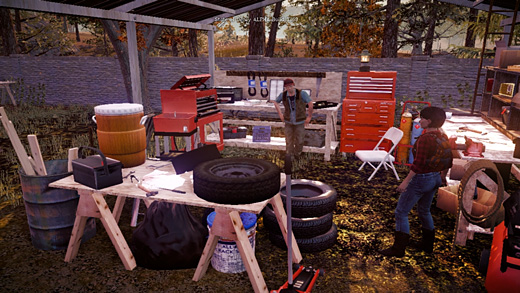 One of the developers shared an interesting example of how this might play out when he described discovering some ammunition in a house on the other side of the map. He radioed back to headquarters and told one of his non-active characters where the supplies were, and then that character used pathfinding AI to make its way to the goal. As that character was traveling, it picked up a pack of zombies as it crossed town, so the developer hopped in a car and ran down the horde to in order to give the runner some assistance.

There's quite a bit more to say on this game, but it's quite late. In the interest of saving time, let me rattle some of these factoids off, rapid-fire style:

At this point, the game has been in development for around two years. There is no question that the team still has more work ahead of them, but what I saw today was quite impressive. Toss in the fact that it's a downloadable XBLA title, and what they've created seems to approach a scale and complexity currently unmatched on the service.

If you're attending PAX Prime this year, the developers and State of Decay will be on the show floor. If you're not, then stay tuned for further updates on this one in the future. I've got my eye on it, and my inner zombie fan is positively rotten with anticipation…

This sounds like the zombie game I’ve always wanted to play. Really excited to hear it’ll be on XBLA because my computer is not so hot. It also sounds a lot like Dead State, a game that was recently funded on Kickstarter, though with less rpg focus and more 3rd person combat. Can’t wait. Always great to hear about these under-the-radar games from you guys, keep it up!