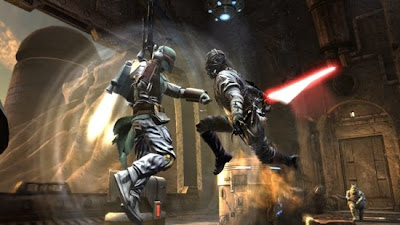 Landing on Luke Skywalker's home planet of Tatooine, Starkiller is after R2D2 and C3PO… as you might remember from the first Star Wars film, they have the blueprints to the Death Star and the Empire is eager to have them back.

It's great to return to such a familiar locale, and the developers included the majority of elements that players would want to see. Jawas, a destructive trip through Jabba's palace, a Rancor, Boba Fett, and a memorable (yet canon-breaking) showdown with Obi Wan at Mos Eisley spaceport. Without a doubt, this is one of the best, most exciting missions available for Force Unleashed.

The only downside to Tatooine is that the asking price of $10 is a little absurd considering that the mission (start to finish) is only 30-45 minutes long, and all of the Achievements can be earned in the very first playthrough.

Don't get me wrong—I enjoyed it immensely and the content is still quite attractive in terms of graphics and presentation, but there's no way it's worth $10. At half the price, I'd be recommending this to everyone on the Internet. As it stands, it's really good… just not a very good value.

As initially mentioned briefly, stuck in the Sith Ultimate Edition – the only PC for Mac, Xbox 360 and PlayStation 3 will appear – even by the two consoles known character packages as well as the additional emissions in the Jedi Temple and on Tatooine. Exclusive in the new version you can make a detour to the ice world Hoth. Like the previous two DLCs, this section follows the bad end of the main game and shows Starkiller in how he infiltrated during the Imperial attack on the base of the rebel base and it involves personal inter alia Wampas,… Read more »

Pretty sure you need to start a new game and then select the level from the list. I think. unintuitive, i know…

i ahve a ps3 and im shure this level is amazing but i cant for the life of me work out how to make it work. i have downloaded and installed it but i cant find the level in the level select screen, i have evan tryed playing th game through again! were is it?