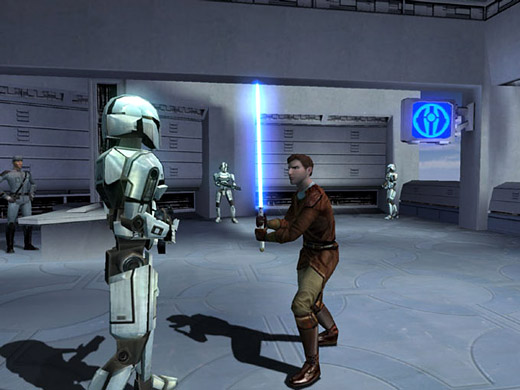 Before the hate mail starts coming in for giving it an eight, let me say that Star Wars: Knights Of The Old Republic is a good videogame. It's doubly good on the Xbox, since it's the only substantial role-playing game (RPG) for Microsoft's machine outside of The Elder Scrolls III: Morrowind, Metal Dungeon, and possibly Pirates Of The Caribbean, though it's safe to say that they all stray from what one usually expects of a console RPG. However, would I call it a great game? I guess that would depend on your love of the Star Wars license.

Me? I'm definitely a Star Wars fan, though not a fanboy. The original trilogy of films will live forever in my personal hall of fame (sans Ewoks), and I continue to look forward to games set in the universe George Lucas created. Therefore, a big part of me is thrilled by Knights Of The Old Republic. The characters are excellent, and very reminiscent of the original Millennium Falcon crew. The voices are just as good and the amount of dialogue quite robust. Noteworthy on their own merits, the way these things combine to establish the weight of choice between the Light and Dark sides of the Force really satisfies. This aspect of the game shines, and my hat is off to BioWare for it.

In fact, although Gene was somewhat hesitant to say it, I will: I found Knights Of The Old Republic to be far more enjoyable than the last two Star Wars films. Of course, comparing games to films is difficult and somewhat pointless, but the fact remains that after just two hours of Knights Of The Old Republic I was far more enthralled in its story and personalities than I was throughout the entirety of Lucas' recent special-effects orgies. I wish that George had the BioWare writing staff on board when hacking together Episodes One and Two, since he and his writers can definitely learn a thing or two here.

Stepping out of my role as Star Wars cheerleader for the rest of this review, I'm sad to say that the level of technical quality is strong with the Dark side of the Force. So strong, in fact, that I agonized over scoring it even lower. People who aren't Star Wars fans could conceivably take a point off of my final rating due to several issues that really can't be glossed over. 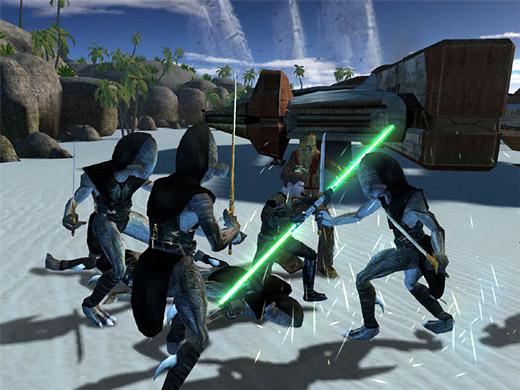 As a whole the game feels pretty rough, the lack of polish and number of bugs very disappointing. Originally designed for play on the PC, it's clearly not optimized to run as smoothly as it could on the Xbox. To illustrate my point, I actually had a save file corrupt during gameplay and destroy my progress. In certain locations my entire party would freeze, leaving me unable to do anything but restart the machine. I also had one character irretrievably materialize on the wrong side of a locked door, necessitating yet another restart. Leaving this many potholes in such a high-profile title is unthinkable.

Moving on to smaller issues, the Xbox's considerable strengths seem to be largely untapped. For example, I was shocked at the amount of loading the game requires. With use of the hard drive and some streaming techniques, there's no reason these constant pauses during gameplay couldn't have been avoided. The graphics are fairly blah as well. The character models are simplistic, and the number of times you'll see faces repeated on non-player characters is totally unacceptable—especially since Shenmue on the Dreamcast had entire towns full of unique individuals. In addition, the framerate is wildly inconsistent. Going from silky-smooth one moment to missing entire animation sequences the next, another few months of cosmetic work to iron things out would have done wonders.

Finally, not a complaint but more of a heads-up, the game is not tailored to console sensibilities. As Gene noted, the menus are extremely cumbersome (evidently nobody at BioWare ever played a console RPG before) and the combat is based on a PC-style "point-and-click" system. The game looks like a fast-paced Action-RPG with its 3D exploration and over-the-shoulder viewpoint, but appearances can be deceiving. I'm not saying this is a bad thing, but don't come into the game expecting finger-blistering immersive combat. With a detached approach built from a foundation of Dungeons & Dragons rules, success in battle is more about good stats and lucky "rolls" than it is about sharp reflexes. Familiar ground to PC vets, console players may be in for a bit of culture shock.

Despite the heavy PC feel, unpolished appearance, and more glitches than I'm accustomed to tolerating, Star Wars: Knights Of The Old Republic still manages to deliver a compelling experience. It may not be the most balanced, well-paced or graphically stunning game out there, but it's definitely got class enough to warrant a purchase thanks to the intelligent dialogue, smart characters, and the true spirit of Star Wars that's been missing for far too long. Oh, and the lightsabers don't hurt, either. Rating: 8.0 out of 10.