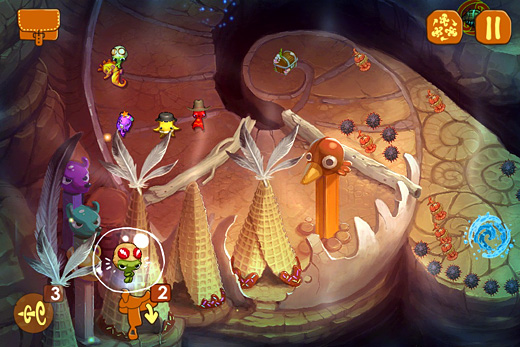 LOW Getting stuck on a level by overlooking a very obvious switch.

WTF When's the next episode coming out?

As a reviewer, it's not often that I come across a game which is already great to begin with, and then turns out a sequel that's even better. Squids: Wild West, from The Game Bakers, is one such property, and it's a real treat.

I came across the original Squids in the app store randomly. A mixture of careful finger manipulation and light strategy role-playing game (RPG) elements, the game told an adorably cute tale of underwater mollusks on a quest to stop evil black ooze from ruining their world.

The art was great, it was simple to pick up, it was a comfortable fit for the iPhone, and it kept me coming back until the end.

I couldn't ask for anything more on iOS.

Building upon the solid fundamentals of its predecessor, Wild West again asks players to take a team of four squids through small areas filled with hostile undersea life. By using one finger to stretch a squid like a rubber band and then releasing it to shoot across the level, players can crash into enemies to deal damage, knock baddies off of ledges, or otherwise carefully maneuver towards their goal.

Squids come in four flavors: Scouts, Healers, Shooters and Troopers. Each has their own special ability and function on the battlefield, and players are free to mix and match as they see fit. Within each category, players can choose individuals that they prefer, level them up, and outfit them with special hats. Yes, hats. This system is deep enough to require a little character management for success, yet simple enough to avoid bogging mobile players down with too many details or nonessentials.

Squids: Wild West is a class act in every other respect, as well. The levels are small enough to be completed in bite-sized sessions, yet tricky enough that the brain remains constantly engaged. The user interface is clear, the tutorials teach the game well, there are varied objectives in each stage, and best of all, the in-app purchases feel like actual "extras" that aren't necessary to complete (or enjoy) the game. The attention to detail and the quality of the work that's gone into making Squids: Wild West are impossible to overlook, and I appreciated the level of polish that makes it shine.

As far as I'm concerned, there's absolutely nothing bad to say about Squids: Wild West. It's smart, smooth, sports great production values, and seriously, what's not to like about decapods that wear cowboy hats, shoot guns, and ride seahorses? Dropping a dollar or two on this title is an absolute no-brainer—and while you're at it, and pick up the original at the same time. On the iPhone, they rarely come better than this. Rating: 9.0 out of 10.


Disclosures: This game was obtained via publisher and reviewed on the iPhone. Approximately 4 hours of play were devoted to the single-player mode, and the game was completed. There are no multiplayer modes.

Parents: This game is not rated by the ESRB, but if it was, I'm sure it would be an E. The violence consists of things like knocking a shrimp off a cliff, or shooting a bubble at a crab and watching it POOF into a pile of pearls. It may be a wee bit on the difficult side for children, but I would have no hesitation about letting my kids try it.

Deaf & Hard of Hearing: No problems here. All dialogue is subtitled, and I played the entire game with the sound off. I never had any issues, and I feel comfortable in saying that it's totally accessible to anyone with hearing issues.