This is sort of a games thing, but it's also a family thing… anyway, the wife is playing Tomb Raider: Underworld right now (not linear enough!) and my son was watching her pilot Lara through some ruins for a bit. He really enjoys watching it, and since the bulk of the action is Lara climbing up walls and jumping chasms, we think it's fine to let him take a short peek once in a while.

So anyway, my son and I were at the airport the other day walking down one of the concourses when he suddenly grabs onto my leg and starts pointing at a wall.

I looked in the direction he was gesturing, but I didn't see anything out of the ordinary. I asked him what it was he was talking about.

"Right there on the wall, it's a life pack just like in Tomb Raider!"

Mounted near the bathrooms was a portable defibrillator in a red box, and I have to say, the package inside looked a lot like a life pack. As a dad who plays games as much as I do, that was definitely a pretty cool moment, and I couldn't help but crack a big smile. 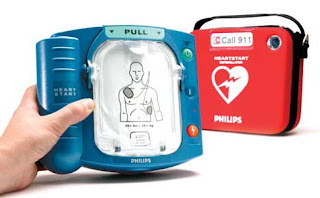 We didn't run over and collect it, though.

That is pretty cool. 🙂