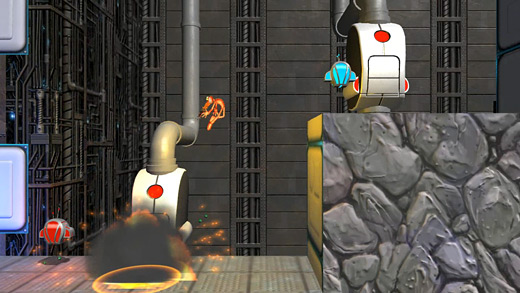 HIGH The game is elegance incarnate.

LOW Players might be fooled into thinking it's as amiable as The Maw.

WTF The ending is ridiculously (and I mean that literally) awesome.

The second Arcade effort from indie-ish studio Twisted Pixel, 'Splosion Man is now available for download on the Xbox 360 via Microsoft's Live service.

Crafted as a 2D side-scroller using 3D characters, 'Splosion Man employs a very simple formula:  move the character from left to right, and navigate platforms along the way. It's one of the core building blocks of early video game design, and it's been done a million times. However, the beauty and brilliance of what Twisted Pixel has done will only be appreciated after spending some time with controller in hand. The geniuses in that studio have polished and refined these fundamental elements to a near-perfect sheen, demonstrating absolute understanding of the subject matter and a superb sense of balance.

Although it's not much for story, the gist of the game is that a molten, fiery creature escapes from the depths of a secret research lab and it's up to the player to help him make his way out. Although some players may want a little more motivation, the only thing that's really necessary is to appreciate its subversive humor and to know that the creature… 'splodes. Literally, that's all he does. Control in 'Splosion Man consists entirely of moving with the left stick and detonating (which is both an attack and a jump) with one button. Although this doesn't sound too impressive on its own, it's revealed to be elegant perfection when taken in combination with the master-class level designs.

Tuned to run like finely-oiled, precision machines, every stage in 'Splosion Man is a series of gaps, enemies, and huge jumps where a player's most potent weapon will be a great sense of timing. Whether it's 'sploding off a wall to reach a higher ledge or bursting at just the right second to get a boost after flying hundreds of virtual feet through the air, the game will demand that players master the deconstructed mechanics and practice their use until chain-'sploding over toxic waste and bursting from rotating platform to rotating platform becomes second nature.

Make no mistake, although it sports a very friendly, cartoon-like appearance, 'Splosion Man is aimed directly at experienced players who are no stranger to dying fast and often. However, in its defense I will say that Twisted Pixel has crafted stages that reward practice, and once a player really knows how to 'splode, no challenge will be a problem for long. For those who may not be used to the level of difficulty, the developers have added plentiful checkpoints, infinite lives, and the option to simply skip a stage if the AI notices the player has restarted a certain number of times. 'Splosion Man is tough (insanely so towards the end) but it's absolutely fair and bends over backwards to mitigate frustration without sacrificing the core design.

For 800 Microsoft Points (a.k.a. $10) 'Splosion Man's 50 single-player levels and 50 multiplayer levels mean that it packs a superior amount of content, and the quality of what's offered is absolutely peerless. It's visually attractive, tuned to perfection, and presents a classic formula that never goes out of style. It might have made me want to pull my hair out a few times, but 'Splosion Man's manic, giggling, and utterly mad main character is someone I'd certainly like to see more of. Rating: 8.5 out of 10.

Parents: According to the ESRB, this game contains cartoon violence. Although the art style of this game makes it seem like he would be a great fit for kids, 'Splosion Man is actually extremely difficult and will likely put young ones off with its demanding gameplay. That said, the content here is pretty bloodless and not graphic, so it's reasonably safe for kids. However, be aware that there are a few areas where the main character uses a fat scientist as a "meat shield" against mounted machine guns, and blowing up human enemies is possible. (It just turns them into steaks and chops, though.)

Deaf & Hard of Hearing: You will have no problems at all. There is no dialogue in the game, and everything vital to play is displayed on-screen. There are no significant audio cues. Download it and have no fear, it's totally accessible.