I finished off Tom Clancy's Splinter Cell: Conviction a day or two ago, and after having been through the entire thing, I walked away feeling extremely dissatisfied and disappointed at the direction Ubisoft took it.

In a nutshell, it was shallow, repetitive, and veered so far away from the stealth play that made the series what it is, that the end result was essentially unrecognizable to me. Rather than a smart, sneaky game asking players to get in and out of areas like a high-tech ninja, Conviction is set squarely in shooterville, encouraging gunplay and explosions in a way that these games never have before.

There are already tons of action games in this vein and hardly any stealth titles being published today. If the future of Splinter Cell is going to be another run-and-gun shoot-fest like this one was, then I won't be spending any more time with Sam Fisher—and that would be a shame. 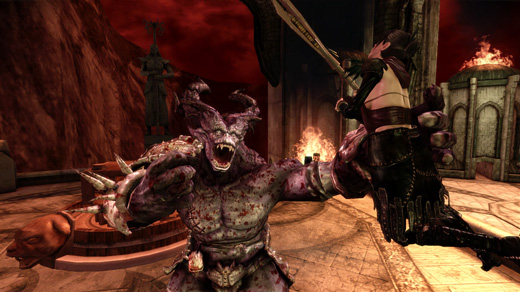 After finishing Conviction, I decided to clear the backlog and finally get around to the most recent Dragon Age: Origins DLCs—The Darkspawn Chronicles and Leliana’s Song.

I was actually to go into detail about each one, but as I was writing, the effort felt more and more pointless. To make a long story short, both pieces of DLC were extremely shoddy and shallow, and not worth the money they cost. After finishing both and feeling taken advantage of afterwards, I started to wonder if the prospect of DLC for story-based RPGs is even tenable.

In a game like Oblivion or Fallout 3 where the player is essentially free to wander the world, I think adding new adventures and new locations is a simple thing and makes a lot of sense. There are always new places to explore, so expanding the realm is a natural fit.

However, in a game like Dragon Age where so much of the experience relies on time spent with the characters and progress made in the story, it seems much harder to come up with some DLC that doesn't feel like a cash-in.

Aside from the fact that the production level of the pieces I played was rock-bottom, I felt no sense of worth to what I was doing—no real feeling that the effort I was putting in was amounting to anything. Both DLCs felt like one-offs with no real attachment to the main campaign, and since I completed the main campaign long ago, there was even less reason to play it—I mean, let's be serious here… I don't think anyone is coming to Dragon Age for the quality of the combat.

Maybe I would have felt differently if I had the opportunity to play these DLCs before finishing the main game, but I'm not sure. A little part of me is thinking that with story-based RPGs of this kind, the main campaign and primary experience is all I'm going to need.

(… so let's hope that developers don't start talking those parts away behind $4.99 unlocks.)

I never had the chance to play the first Two Worlds, but I didn't hear good things about it. However, I have been keeping an eye on the upcoming Two Worlds II, and it's actually looking pretty hot.

While we wait to see whether or not the sequel can redeem the mistakes of its predecessor, I want to give SouthPeak huge props for being able to laugh at themselves—they produced a series of videos poking fun at the first title, clearly recognizing the generally unfavorable way it was received in the games community.

It takes a lot of balls to publicly own up to something like that, and even bigger balls to do it in a humorous way. I respect that. Even better, these videos are actually hilarious. If you haven't seen them, check out part one and part two.

I think you'll be glad you did.

“To be fair, you can’t critise a game for having turn-based combat purely because you don’t like it. As a concept its actually rather enjoyable, which is why RPGs that have combat like Dragon Age’s sell well (even more so for games that are near-enough full turn-based, such as Final Fantasy/Dragon Quest).” I should make it clear that I’m not generally blasting games with turn-based combat – I love X-Com! – but rather games with BORING turn-based combat. I don’t expect that everyone agrees with me, based on the sales figures alone, but I just don’t get how people could… Read more »

“I have taken to calling RPGs “menu games” because the majority of the gameplay revolves around navigating menus. Interfacing with a game through a menu is simply not as fun as a control scheme where you have direct control over your character(s). I’d be much more interested in Dragon Age if it had a Demon’s Souls-style control scheme.” To be fair, you can’t critise a game for having turn-based combat purely because you don’t like it. As a concept its actually rather enjoyable, which is why RPGs that have combat like Dragon Age’s sell well (even more so for games… Read more »

I played through Dragon Age mainly for the RPG elements such as classes and unique abilities as well as the Biowarey conversations and story choices. I don’t think the combat is bad, it can be pretty fun, what makes it worse is the sheer number of battles that take place in ugly and massive caves and dungeons. I’m really hoping game developers start to mimic the combat in demon’s souls. Imagine that combat, only with conventional saving and a pause function! The possibilities!

“I mean, let’s be serious here… I don’t think anyone is coming to Dragon Age for the quality of the combat.” This is why I haven’t picked Dragon Age up yet. I don’t understand how anyone can find “story” to be a sufficient reason to buy a videogame. Granted, Bioware is far ahead of the pack when comes to telling a story worth paying attention to, but if the story isn’t grounded in a fun-to-play game, why bother trudging through? Why endure 40 hours of a subpar game experience for 4-6 hours of mediocre storytelling? I have taken to calling… Read more »

I’m going to remain cautiously optimistic about Two Worlds II. The first was a mess of epic proportions — from what I understand the team was under tremendous time and financial constraints. Let’s hope that it becomes a franchise worth visiting… As for DLC in story-driven RPG’s, I think that there is a future, but Dragon Age’s direction is off. Leliana’s Song felt like a step in an interesting direction — prequel chapters that give insight to the characters? I’ll take it! The unfortunate thing is that Leliana’s Song feels inconsequential — it has virtually no effect on the main… Read more »

Check out the new trailer for Two Worlds II which has some gameplay and explores the world of the game: http://www.xxlgaming.com/newspage.asp?which=851