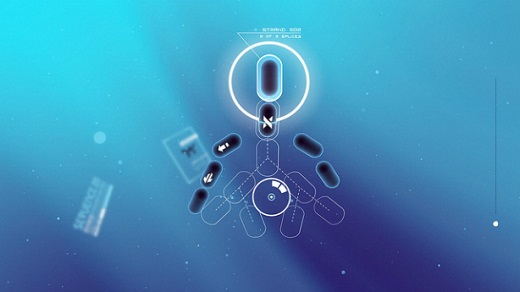 LOW I had no idea what was going on for the first 20 minutes.

When I first saw Splice a couple of years ago, I didn't really understand it, but it was so visually distinct that I was instantly intrigued. Unfortunately, it vanished off the radar soon after that first look, and I had forgotten all about it until it resurfaced on PSN. I'm glad it didn't fade away into nothingness, though… Now that I've had a proper sit-down and finally grasp what it's about, there's really nothing else out there like it.

Coming from Cipher Prime, Splice is a puzzle game that fits the definition of minimalism in nearly all respects. There are no tutorials of any kind, no chunks of text to parse through, and the graphics are as simple as could be. However, rather than feeling under-produced, it feels amazingly elegant.

…That said, when I first started the game, I had no idea what the hell I was looking at or what I was doing. Thankfully, after some careful observation and a whole lot of experimentation, it all started clicking.

Each puzzle is presented as a genetic map of sorts, with the game presenting a series of cells arranged in an incorrect configuration, and underneath the cells is a white outline of what the correct structure should look like. In order to move the cells around, players get "splices"—essentially the number of moves they can make.

The challenges are quite simple at first, with standard cells that only need to be cut and moved. Soon after, different types are introduced that increase the level of complexity. The splitter cell duplicates itself and anything attached to it. The extender cell sprouts another cell at the end of its chain. The disintegrator erases itself and connected cells, and so on.

At times (okay, often) it can be hard to visualize a solution because moving a cell with a splice can cause the entire array to shift and move, but the devs had a stroke of genius when they included fast-forward and rewind functions. No matter how many wrong moves I made, trying things out and experimenting towards the right answer was totally painless. That said, Splice is the wonderful sort puzzler where each new challenge seems impossible at first, but once the player has a good knowledge of what's happening, each answer is usually quite logical, or even simple.

Speaking of simplicity, the graphics are quite sparse (as I alluded to earlier) but they're incredibly graceful. The backgrounds remind me of the liquid that holds matter suspended in a petri dish, and the cells are simple objects with just the tiniest bit of motion suggesting a sort of nascent life. The classically-inspired piano soundtrack is a relaxing complement, and everything works to put the focus where it should be—on the puzzles. The ambiance is perfect and lets the core content speak without interference, which I appreciate.

Once again, Sony proves itself to be a welcome place for alternative experiences that don't easily fit the standard boxes, and Splice is one more that they can be proud of. I found it to be gracefully understated, masterfully elegant, and a puzzler that I enjoyed every minute with… Even those minutes when I had absolutely no idea where that final cell needed to go. Rating: 9 out of 10.


Disclosures: This game was obtained via publisher and reviewed on the PS4. Approximately 6 hours of play were devoted to the single-player mode, and the game was not completed. (I'm still working on it!) There are no multiplayer modes.

Parents: According to the ESRB, this game contains: Nothing. Not a thing to be worried about. There are no descriptors at all, and the game is 100% safe for players of any age. It's just cells in a dish, yo.

Deaf & Hard of Hearing: No problems here. There's no spoken dialogue, and no audio cues necessary for play. It's perfectly accessible.

I will definitely give this a shot when I get some spare cash. Though it just doesn’t seem right to call the game “Splice” when there isn’t a killer mutant bald chick involved.