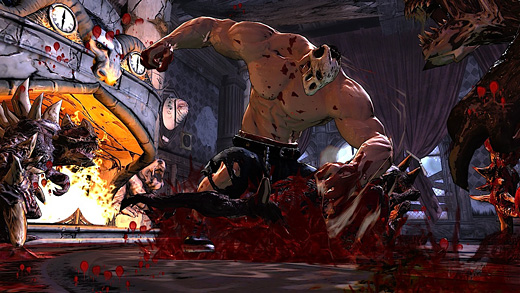 HIGH Revving the chainsaw and delivering a long string of one-hit-kills.

WTF Penetrating an enemy's neck hole with its own head, over and over again.

Take some heavy metal, a living hockey mask, several nods to Lovecraft, buckets and buckets and buckets of blood, a well-deserved "M" rating, loads of salty language, softcore girlie pics and a pretty decent combat engine, toss it all together and what's the result? Namco's reboot of the long-forgotten 1989 Horror title, Splatterhouse

A third-person actioner absolutely dripping with brutality and gore, this updated version of Splatterhouse is exactly what it looks like on the back of the box: a huge monster of a man vaguely inspired by Friday the 13th pummels hordes of monsters in the most violent ways possible—and believe me, there are plenty of ways.

The game's B-movie storyline puts players in the role of Rick, a nebbishy guy who's attempting to rescue his girl from the local mad scientist with the help of a mask that's turned him into a hulking bruiser. While there is some potential for quality cheese here, it never amounts to much. Events are extremely predictable, and the misguided idea to split the opening cut-scene into several parts over the course of the game only serves to prevent players from making an initial connection with the hero.

While storytelling is clearly not the selling point of Splatterhouse, I suspect that very few players will hold that against it.  No, the main draw here is most definitely the hyper-violent, crimson-soaked, spike-tipped combat delivering an ocean's worth of bloodshed. 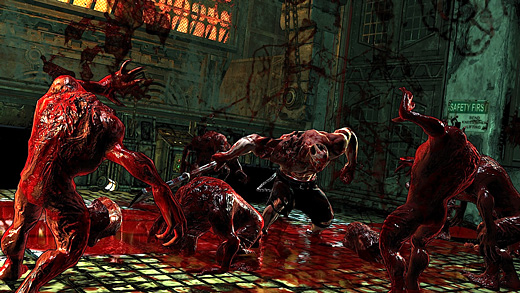 Now before going on, I want everyone reading this review to understand that Splatterhouse is the most explicitly depraved and sadistic title I've seen in quite some time. I think that its dark nature should be fairly obvious from the title, the ESRB descriptions, and nearly every screenshot that's ever been distributed in magazines and online, but just in case there's any confusion, let me clear that up. Some examples of the violence? Arms are ripped from their sockets and used as fleshy cudgels. Long sections of intestine are fatally ripped out of the raw, squinching anuses of swamp monsters. Eyeballs are torn out, decapitations are commonplace, lungs are removed, monsters are impaled, smashed, and even microwaved, and every inch of the character, the levels, and the television screen itself is literally showered with blood. Extreme carnage is the name of the game here, no question about it.

That said, don't get me wrong—the list above is simply a statement of facts, not some kind of moral judgment or condemnation. Although I can hardly think of a title less appropriate for sensitive people or children than Splatterhouse, I have no objection at all to the absurdly graphic content as long as it's taken in the proper context. As a consenting adult who enjoys the horror genre, I have the proper context. Those contemplating playing this game should put down the phone to Fox News and make sure they have it, too.

Now, with that disclaimer out of the way, I am quite happy to report that the developers aren't relying solely on the shock factor here. Clearly, they understand what makes for exciting and approachable action gameplay.

Although Rick's moves aren't quite as deep and nuanced as some others in the genre, the selection is more generous than expected. Stringing together attacks feels effortless and intuitive, for the most part. Although a little more blending of transitional animations wouldn't hurt and there were often times when the hit priority between my attacks and those of my enemies was unclear, I had no problem jumping into the action and feeling as though I was properly kicking ass. Rick brings the pain in a big way, and the action is only occasionally slowed by a small handful of extremely simple puzzles.

Environmentally, Splatterhouse features fairly straightforward level design that consists mostly of large rooms for combat connected by hallways. While this would ordinarily be a negative, the developers included just enough Cthulhu-lite decor to keep things interesting for the few moments when the player is not engaged in crushing skulls. My only real complaint about the levels comes when the game shifts from 3D to 2D. 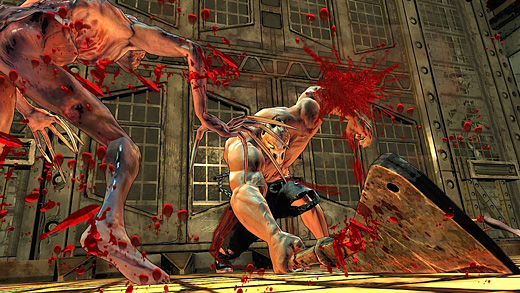 In nostalgic callbacks to the original Splatterhouse titles (all three are included as unlockables on the disc) Rick will occasionally find himself walking side-to-side, dodging hazards and leaping pits. As a player who fondly remembers the source material, these segments brought a smile to my face… conceptually, at least.

Unfortunately, every one of these 2D bits feels awkward and unpolished, and I can easily imagine most players dying more in these areas rather than any of the combat zones. It's also worth noting that the game's checkpoints are sometimes a little further apart than is preferable. They're not terrible by any means, but the novelty of these sidescrolling parts wears thin when the most recent checkpoint is 30 seconds behind a pit that's maddeningly difficult to jump over.

If the checkpoints were the only issue, then Splatterhouse would be in pretty good shape. Unfortunately, it's accurate to say that the game suffers from an overall lack of polish and frequently displays areas that need TLC.

For example, there weren't quite enough enemy types to keep the game feeling fresh from start to finish, and Rick's QTE "splatterkill" animations are repeated far too many times. More variation in both would have been quite welcome. Aside from that, the camera needs a little too much babysitting, the framerate constantly runs a bit too slow, and the load/restart times after Rick has been taken down are intolerably long. In fact, I had to install the game to my 360's hard drive to help alleviate the problem, but having 20- or 30-second delays before getting back into the game is inexcusable.

While there's no getting around the fact that Splatterhouse

feels like something that could have significantly benefited from another six months in the oven, it's not hard to see that the developers have solid ideas that are on the right track. The combat hits the mark where it needs to, the pace of the action stays pleasantly high, and this modern incarnation is faithful to the ancient source material without being slavishly so. As a player who doesn't mind some roughness when the core of a game is good, the uber-violent time I spent with Rick and his mask was great catharsis, and a pleasantly satisfying way to invest a few hours. Rating: 6.5 out of 10.

Disclosures: This game was obtained via retail store and reviewed on the Xbox 360. Approximately 9.5 hours of play were devoted to the single-player mode, and the game was completed. There are no multiplayer modes.

Parents: According to the ESRB, this game contains blood and gore, intense violence, nudity, sexual themes, and strong language. How simply can I put this? Under no circumstances whatsoever should this game be given to children, children should not see the game being played, and probably shouldn't even be in the same room as the disc. The violence is off-the-charts brutal and there's salty language and even a little bit of female nudity, to boot. Children. Not. Allowed.

Deaf & Hard of Hearing: You shouldn't have much trouble. All dialogue in the game is properly subtitled, and I only noticed one type of enemy which uses an auditory cue before it attacks. Fortunately, this enemy (it looks a bit like a fat monkey with dreadlocks) also has a visual cue that accompanies the sound. In general, I would say that this game is completely accessible to Deaf or hard of hearing players.

Its not that bad like Fist of the North Star its a one button mash’o’thon for the most part, is it bad? I’d say no is it lacking yes is it ultimately fun I think so but it can be samey/repetitive.

Like Neir it seems action games want to be mindlessly bashy and I blame devs for that, is it that hard to have a decent 2-4 combo combat system with more depth than god of war?

Glad to hear this one turned out decent. I was excited when it was first announced, but as more details came out, I kinda started to fear it wasn’t going to live up to my expectations.

I suspected the sidescrolling parts would be ass from the video footage, but I’m happy to hear the rest of the game is worth checking out. Now if those fuckers at Gamefly would just send it to me…