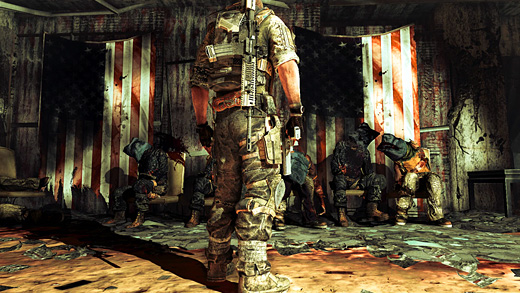 WTF This many soldiers were abandoned for six months?!? Get real.

If there's one thing I want readers to come away from this review with, it's that I have respect for games that buck convention and explore new territory. Spec Ops: The Line

is one that makes the attempt, but while the dark, difficult story is must-see material, the tedious gameplay fails to support its challenging conceptual side. I admire what the developers were trying to do here, but I can't fully embrace the result.

Created by Yager, Spec Ops: The Line puts the player in the role of a soldier sent into Dubai for recon. One of the worst sandstorms in history has buried the city and trapped the residents. A battalion was sent in to evacuate the populace, but they haven't been heard from in six months.  After that failure, the current mission is to re-enter the city with a small, three-man squad, see what's what, and then report back. Of course, nothing goes as planned…

At heart, it's a third-person cover-based shooter that has the player running, ducking, and popping up to eliminate enemy soldiers at a relentless pace. The tightly controlled, linear levels funnel the player towards handfuls of enemies who generally take potshots from behind low barriers and crates. Once those have been dealt with, dozens more come from back rooms, adjacent hallways, or wherever it is that generic cannon fodder comes from. In an effort to ensure that all of the genre's boxes are ticked, there are plenty of gun turrets to be commandeered, as well.

The mechanics here are competent. Spec Ops controls smoothly and most players will be able to jump in with little (if any) learning curve. On the other hand, there's no surprise or variety in the play, and the shooty comes at such a steady pace that it's exhausting. I could only take so much bullet fire, explosions, and repeated voice samples announcing the presence of a shotgunner on the field before I needed to turn it off. It's not that the game is a grueling simulation of wartime survival, it's just a lot of rote shooting gallery action. Spec Ops will satisfy those looking for boilerplate gunning, but it's so mechanical and predictable that there's little to be gleaned from the gameplay.

This textbook play is the absolute opposite of the story Spec Ops: The Line is trying to tell, and it's a real shame—if not for how tiresome it is to get through the relatively brief campaign, I'd say that everyone interested in exploring confrontational storytelling and soul-staining material should spend time with it. 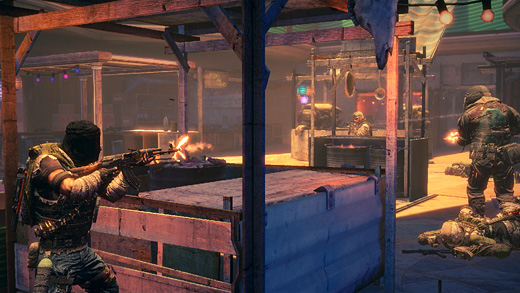 As the soldiers sent in after the soldiers who were sent in, the player's squad finds one of the Middle East's most opulent cities reduced to a warren of rotting husks and broken wreckage half-buried under oceans of sand. Plenty of dead bodies litter each scene, and environmental elements like cautionary messages scrawled on walls or rooms obviously used for torture suggest that Very Bad Things have been happening since the rescue battalion went missing.

As events transpire and relevant information is discovered, the player will see a darker, less heroic side of warfare than they're usually treated to. Hard choices must be made, and there is never a clear right or wrong; no simplified red or blue aura to choose between.

I hesitate to discuss the story in greater detail since it's the most worthwhile aspect of the game. Spoiling it would be a crime. However, I can say that there were at least two or three moments that were shockingly powerful, even to someone a bit on the jaded and desensitized side, like me. In fact,  after reaching one particular scene, I was so taken aback at the result of my actions that I nearly leapt up and reset my console in an effort to erase it from my mind—to somehow undo what I had done. Instead, I forced myself to sit there for a moment, simply letting the horror sink in as my stomach turned.

Unfortunately, after that devastating scene and every other one like it, the game constantly rushes the player towards yet another videogamey, unrealistic gunfight that holds little weight or meaning. This insistent push to hurry up and shoot more dudes is ever-present, and endlessly piling up bodies (often literally) severely undercuts the emotional impact of the story. It's almost as though the developers were afraid that the cut-scenes would be too heavy, or that players would get too bored if the bullets stopped flying for more than a minute or two and had to think.

The way I see it, any possible commentary from Spec Ops on the nature of shooting was canceled out by its very implementation here. After all, how can I possibly take the ramifications of death and killing seriously when the developers want me to gun down wave after wave after wave of generic grunts in contrived shooting galleries? Why bother crafting such a potentially impactful story only to marry it to utterly stultifying gameplay? The two halves of The Line's formula don't quite hold together, and it only gets worse when other factors are taken into account—for example, how am I supposed to believe that this absurdly huge number of soldiers had been left to their own devices in Dubai for so long? Why didn't my squadmates speak up more when things started getting weird?

The upside down American flag prominently displayed on the title screen is an image that makes a bold statement about the game's intentions, and that same power rears its head a handful of times before credits roll. However, the overall design and experience of Spec Ops: The Line

is too heartbreakingly conventional to do anything more than wander distractedly towards the general direction where new ground might be broken. The vision here isn't properly realized, but even so, I applaud the effort and hope that Yager will continue down this same path in their future works. Rating: 6.0 out of 10.


Disclosures: This game was obtained via publisher and reviewed on the Xbox 360. Approximately 7 hours of play were devoted to the single-player mode, and the game was completed. No time was spent in multiplayer modes.

Parents: According to the ESRB, this game contains blood and gore, intense violence, and strong language. There's a ton of gunplay and bloodshed, plenty of salty language, and several intense scenes that are entirely unfit for kids. This is an adults-only title, no question, so keep young ones far away.

Deaf & Hard of Hearing: You may find that not having access to certain audio cues may make the game slightly more difficult, but there are onscreen cues which aid during combat and the enemy placement (in general) is very predictable. Subtitles are provided for all cut-scenes and dialogue.

Mind you, I’m still going to disagree with you most of the time, but damned if it isn’t hard to find reviews that aren’t totally half-assed hack pieces or paid ads for the game in question. You know the depth of BS on many major review sites.

This doesn’t necessarily apply to this particular game, but I just gotta say it. Brad, I disagree with you frequently; and when I say frequently, I mean like 75% of the time. Yet, I read every one of your reviews, don’t miss a one; what sorcery you working with, bro? Must be this fabled “integrity” thing I hear games journalists mention every once in a while.

Having the aura of yet another samey third person shooter, this would have never caught my attention. Numerous comments on its bold storyline, however, got me interested – only to lose interest again by hearing about its dreadfully generic gameplay. I can grind my way through certain types of games for a good story, but not being a fan of shooters in the first place, I can’t see myself playing this. But in a way, I applaud the game for what it (probably) does. I picture unassuming buyers, having grown tired of call of duty and battlefield from playing them… Read more »