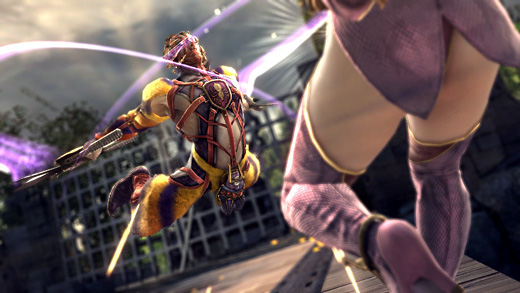 It's been quite a while since I spent any time with the Soul Calibur series… I think the last one that I really got into was probably the original SoulCal on Dreamcast. The series kind of dropped in terms of quality (for my taste, anyway) and it fell off of my radar until today when GameFly sent me Soul Calibur V

I've been hearing mixed impressions on it, and after a very brief sit-down, it's already back in the shipping envelope and ready to be sent out in the morning.

As someone who hasn't played the game in quite some time, I was shocked to see how unwelcoming and cryptic it all is. Perhaps it all makes more sense to those people who've been playing the series religiously, but I found it pretty overwhelming, and definitely not in a good way.

For starters, I'm surprised to see that comprehensive, user-friendly tutorials are completely absent. I don't know if that's still the norm with fighting games in general, but the so-called "training" mode was worthless and trying to learn the ropes against AI opponents was a complete wash. It's no fun to jump in and out of a pause menu move list and attempt to do maneuvers I've never tried while getting pummeled on ‘easy' mode. All I wanted was a mode which showed me each move and combo one by one, in a simple, straightforward manner. Why does that not exist?

Complicating things further, why does the menu listing the moves not display the buttons which correspond to my controller? It must be a very simple to make a triangle or square appear on-screen, yet this is another thing which would make it easier to learn the game that's not implemented. Why should I have to translate the inputs in my head?

And the story mode? What a joke. What happened to the days when each character had their own little bit of backstory and players could look forward to a unique ending sequence? Hell, the original Soul Blade had at least two endings per character! It may be a small thing, but it gave mostly-solo players like myself some reason to (at least) try each fighter, if not finish the game with every one. I really don't think it's too much to ask, and while I'm at it, how about some higher-quality cutscenes for the story mode that does exist? SoulCalV's shabby storyboards between campaign levels aren't even finished pieces. It comes off as cheap and slapdash.

I'm not an expert on fighting games these days and I don't know what the norm is for the genre at the moment, but Soul Calibur V feels like it was made without a moment's thought given to people who weren't already familiar with it, and I see little reason to invest any time or energy in a game that doesn't waste any making me feel at home. This type of approach comes off even more poorly in comparison to the most recent Mortal Kombat—besides having a ton of single-player content, it was incredibly easy to get into even for those (like me) who hadn't played an Mortal Kombat in years. In light of Mortal Kombat's quality, devs can't get away with focusing on tweaking their fighting engines and ignoring all the other aspects that make for a good, rounded experience.

At the moment, I'm currently playing [redacted!] for review, and it's been an incredibly disappointing experience.

I won't say much about it now, but it's one of those titles that settles into a groove early on, and does nothing to spice it up or change the formula. I'm about twelve hours in (or so) and the gameplay has been me repeating the same sort of tasks over and over and over for that entire time. It's incredibly boring and I think I've reached my limit as to how much I can take.

My guess is that I'm about halfway through the main campaign, although it's hard to say… I've seen other critics on Twitter mention their completion times as being in the 40-hour range, and I just can't see myself putting that much time into something as repetitive and monotonous as this one. If there was some sort of story I could sink my teeth into or even some PVP to spice things up (ala Dark Souls) that would be one thing, but putting myself through another 20 or 30 hours of pure grind?

I’m using IE when watching your site and can’t find review scores. I’ve checked a lot of them (reviews). There are well hidden 🙂