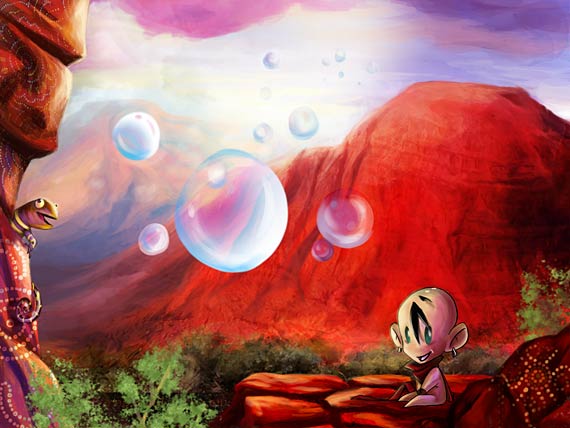 So what are the odds that a small, no-hype Toys "R" Us exclusive title from a developer I've never even heard of before would be decent, let alone one of the most enjoyable games I've played all year?

Soul Bubbles from French developer Mekensleep is a fantastic game for the Nintendo DS that is so polished in its presentation, so balanced in its difficulty, and so clever in its gameplay design that it effortlessly sails towards the top of the handheld's library, easily the equal of (or better than) even first-party Nintendo titles themselves.

As the title suggests, this game is about bubbles. The player is in control of a small spirit-like being whose job it is to guide lost souls to the afterlife. This is done by creating bubbles around the spirits and blowing these occupied spheres through the variety of areas in eight distinct worlds; in effect guiding a bubble from point A to point B. It sounds simple (and it is) but the beauty of Soul Bubbles lies in the way these globes interact with the environment. 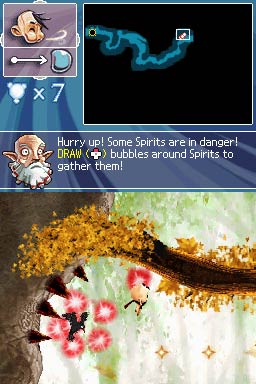 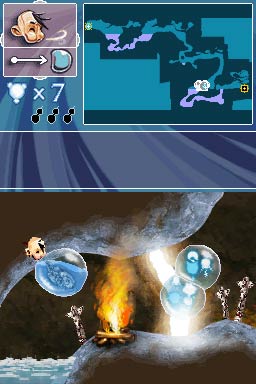 Within just a few moments of starting the game, I was quite impressed with the implementation of the physics—doubly so since the realistic behavior and natural feeling of bubbles blowing around and bouncing off surfaces takes place on the DS's hardware. Everything generally reacted the way I expected it to, which itself is noteworthy since the handheld is not known for running realistic simulations.

After being introduced to the basic formula, the game introduces a pleasant level of complexity via the ability to reduce the size of the bubbles by cutting them and dividing them into smaller orbs.  Once through a narrow passageway or around a dangerous obstacle, the bubbles can be re-formed back into one large entity. It's a neat feature, but even with this addition, the game still seemed on the simple side until I graduated past the first cluster of levels and realized that each world has a "theme," or a different way of interacting.

The ice world turns the airy, diaphanous bubble into a solid sphere that rockets around the way Sonic the hedgehog used to. Another world introduces heavy and light gases which restrict the movement of the bubbles, and another plays off the elemental familiarity of fire and water. Quench flames by capturing water inside your bubbles and popping them at the right time to clear the path. 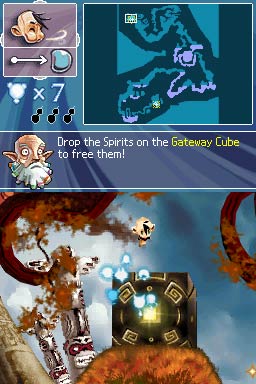 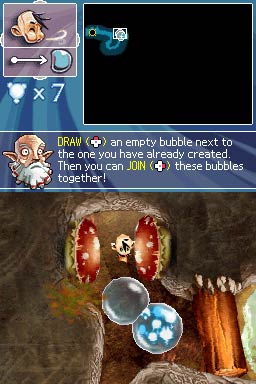 Each new layer to the gameplay is both complex enough to change the way the player thinks about navigation, yet always clear and easy to grasp at all times. As a result of this superb design, what could have been a one-note minigame becomes a full adventure that remains fresh and challenging from start to finish. Indeed, one of the true triumphs of Soul Bubbles is not only that it never runs out of tricks and twists, but that the difficulty of the game is geared so that anyone can complete the game with reasonable effort.

Those players who crave greater challenges can seek optional hidden items which are quite cleverly hidden, and can require some out-of-the-box problem-solving. In one memorable example, I had to move a water-filled bubble upwards with enough inertia to keep the liquid traveling past a gate of spikes that would pop it, and then rapidly draw a new bubble around the water before it fell back down. There was no precedent to tell me this was something I could do, yet it worked perfectly because it seemed like it should. Soul Bubbles is filled with unexpectedly sophisticated sequences like that, and they are a true sign that the people behind it not only know exactly what they're doing, but they also know what constitutes excellent game design.

After initially inserting the cartridge and turning on the hardware, a brief message pops up to proclaim "The game does not depict licensed racing cars, post-apocalyptic soldiers, elfs, orcs, magicians, or gang fights… please do not panic, it's all gonna be hunky dory."

Soul Bubbles is a perfect example of masterful game design. The Nintendo comparison is definitely apt here. (Indeed, the game is better than some of Ninty’s 1st party stuff.) Good job on bringing more attention to an under appreciated gem.

Thanks Brad for pointing this game out. Being a Toys R Us exclusive would of meant that I would of never of come across it (I do go to TRU, but not that often). I am looking forward to giving this game a try.