I just received a review copy of Soul Bubbles for the Nintendo DS. I didn't know anything about it except that I saw a full-page ad for it on the back cover of Play magazine and I thought that the illustration looked appealing. After spending about two hours with it this morning, I'm absolutely impressed. The quality of this cart is absolutely top-notch… the graphics, the level of control, the variety and gameplay, the implementation of the stylus… it's all totally polished.

Basically, you play as some sort of fairylike spirit guide tasked with herding ghosts into the next world. The trick is that you can only transport them after enveloping them in bubbles and blowing them through mazelike environments. It doesn't sound like too spectacular a description, but trust me—this game is absolutely good enough to be a first-party Nintendo title. 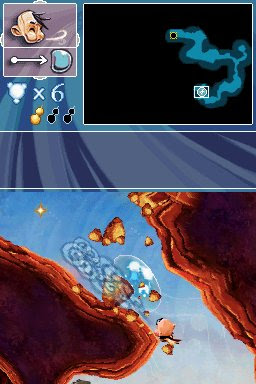 Soul Bubbles is only available at Toys "R" Us, an unfortunate circumstance since no one I know really buys games there, in addition to the fact that "exclusive to store X" games usually blow chunks. Not this time, though.

I'll reserve further comment for the moment since I'm still in the early stages of the game, but so far… WOW.