On April 8, Sony hosted an event in Seattle's Capitol Hill neighborhood in honor of the new PlayStation 3 Move controller and its games. I was fortunate enough to attend the event with a number of other local press folks (big ups to Chris Matel of Gamer's Hell and New Guy from The Escapist Without a Business Card) and snapped a few pictures in between scarfing hors d'oeuvres. Check it out. 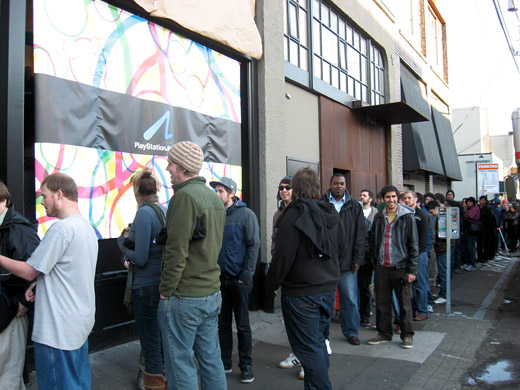 This was the line of PS3 non-press attendees waiting to get in after the Press period was over. Thank goodness for credentials! 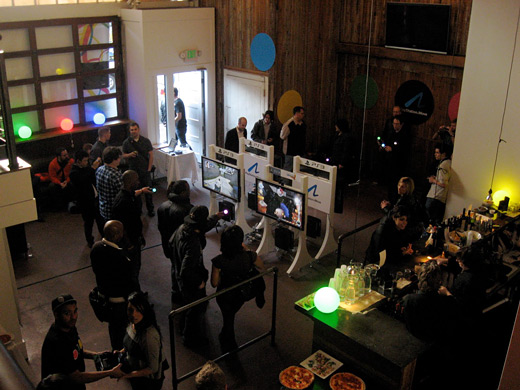 A view of the main floor from the balcony area above. The event was housed in a local bar near Broadway (a popular strip in Seattle's most gay-friendly neighborhood) and the bartenders were quite generous. Notice the open door at the top of the pic? The constant opening/closing and changing light levels threw the Move controllers into a tizzy and required constant recalibration. It was unfortunate placement since the developers on hand mentioned several times that the Move is fine in either light or dark settings, but that it struggles in environments where lighting fluctuates. That fact was quite noticeable. 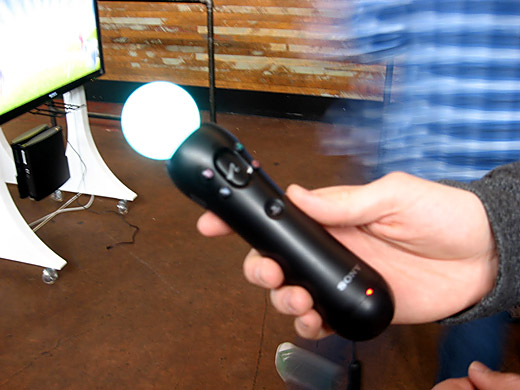 The Move controller itself, with a plethora of buttons and a squishy ball on top that changes colors on the fly. 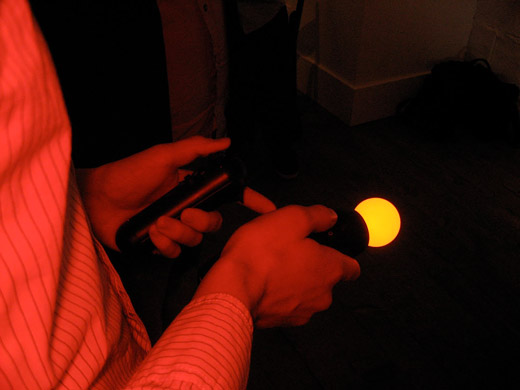 A shot of the Move with its sub-controller (now called the "navigation controller".) The lighting? A perfect example of why Chris Matel works at Gamer's Hell—That red glow is coming from him. 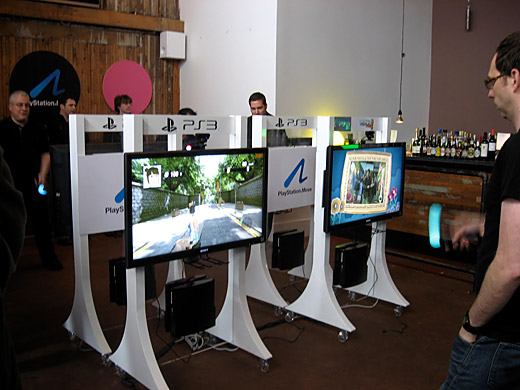 The person depicted here is playing Sliders (tentative title). A crazy downhill racing/obstacle game that features characters scooting on office chairs, it looked amusing enough but didn't control well. It was also very simple in nature, and didn't do much to show the controller's strengths. Some players will buy it for the gratuitous butt-shots offered by the arching Chinese girl character, but it was more novelty than anything. 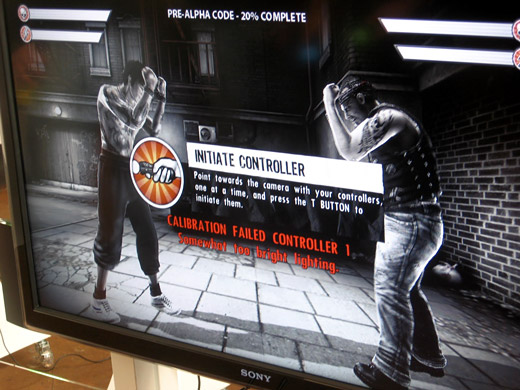 A shot of the Motion Fighter game (actually called Dukes on the PS3 system memory.) Of everything that was shown, this was the game that had the most potential, in my opinion. Played with a Move in each hand, the game tracks actual punches thrown and had a nicely visceral feeling. The developer present said there'd be a lengthy campaign mode as well as some character customization. When asked if it was strictly fisticuffs, he said that there'd be some special moves and grabs, but the game was basically enhanced street boxing. 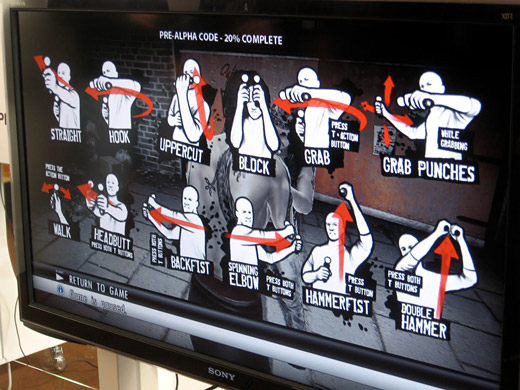 The moves list for Motion Fighter. It's a bit hard to make out, but the top row is mostly based on motions only, and the bottom row represents moves that use motions plus buttons. 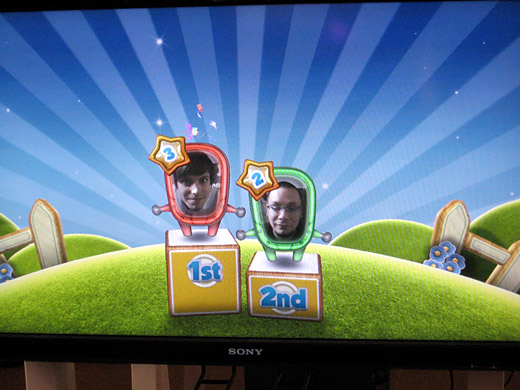 Chris and I playing against each other in one of the simplistic "enhanced reality" minigame/partygame applications for the Move. Instead of seeing the us holding the controller onscreen via the PS3 Eye camera, it appeared as though we were holding tennis rackets, electric razors, harpoons, and so on. As you can see, the Eye was also used to snap our photos for in-game avatars. As you can also see, he's winning. 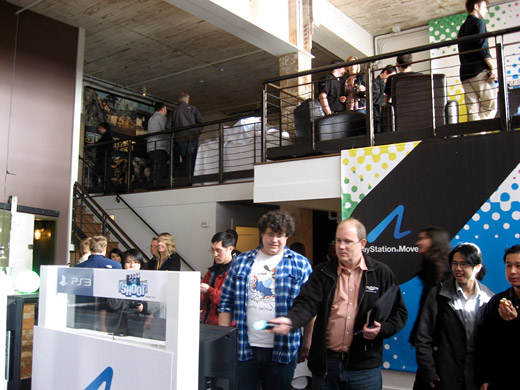 The people on the balcony above were treated to Socom 4.  Using both the Move and the navigation controller, it handled exactly like a Wii game in its Wiimote/Nunchuk configuration. However, the aiming with the Move was far superior to anything the Wiimote was capable of. Aside from the new controller, it seemed like any other standard military shooter, though there wasn't much time to take in its finer details. Sadly, the Sony reps removed it from the floor before the Press period was over. 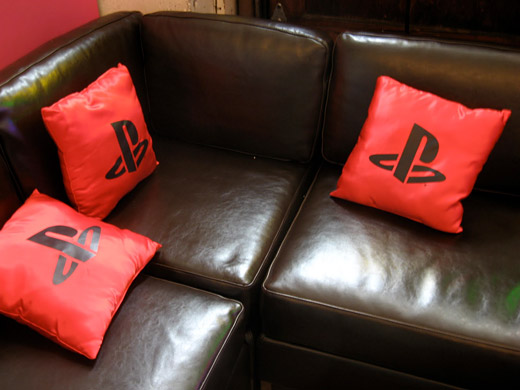 This picture speaks for itself, I think.

It was a good event overall and it was nice to finally get a hands-on with the Move, but I will say that the first round of software is less than impressive. The games seem to fill the same space that Wii titles currently do, and I didn't see any compelling reasons to rush out and pre-order the new hardware. That said, the Move was vastly superior to the Wiimote in terms of accuracy and 1-to-1 movement reception. The tech is clearly better, so my hope is that by E3 or soon thereafter, we'll start to see some games that capitalize on that fact.

Still, I have to be honest in saying that the Wii's been out for a few years and I've yet to see much that truly takes advantage of its controls… I suspect the same may hold true for the Move. Time will tell.

Yea I think the Playstation Move is pretty cool, I mean maybe Sony could of launched it earlier since Wii already has an audience used to motion controlled gaming. So it’s nothing new. I’m highly anticipating it though, would be cool to try Killzone 3 with it =)