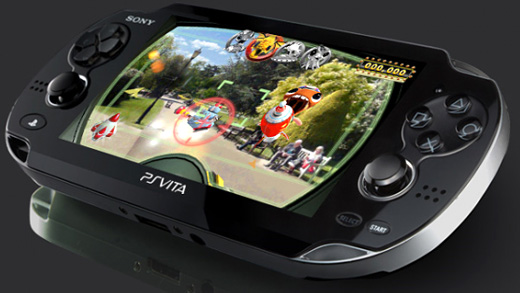 Wow, where to begin? It feels like there's so much to talk about…

Clearly the big news today was the array of press conferences given prior to the official opening of E3. The GameCritics podcast crew will be covering the show during our recording session this coming weekend, so look for our comments in detail to follow shortly afterwards. I have a feeling that it might be a longer-than-usual episode.

Since the show hasn't officially started and I have a lot of research to do since I'm not on the floor this year (more on that later) I won't say too much at the moment. However, the biggest reveal for me so far has been Sony's price tag of $250 for the PS Vita, formerly known as the NGP, also known as the PSP2. That's an incredible price for such a snazzy piece of technology. Apparently Sony has learned from the pricing mistakes it made earlier this generation.

(By the way, there's also a $300 3G model available, but apparently that service will only be provided through AT&T and I'll be damned if I sign up for another wireless service plan. The standard Vita's Wi-Fi will suit me just fine, thanks.)

Sony also announced a special 3D monitor that sports a new trick—in addition to the standard 3D display, it can also run in a different mode to display two different screens per visual channel.

What this means is that two people sitting side-by-side can look at the same screen and see completely different things. Basically, it's couch co-op with each person having a fullscreen view while using only one TV. It's pretty amazing stuff and I will admit that I am impressed, although I don't like the idea of wearing glasses to take advantage of it and I'm not very inclined to use 3D in general. Honestly, this probably isn't something for me, but still… pretty formidable tech.

Oh, and about not being on the floor… I had a couple friends ask if I was going to be at the show this year, and I told them that I wasn't because it coincides with the beginning of my oldest son's summer visits with me. Up until this point I guess I hadn't really realized that the show will likely always coincide, so I probably won't be going again until he's able to come with me… another six or eight years, maybe?

As much as I love games, family always comes first and since I only get to see my boy three times a year, there's no way that E3 (as much as I love it) will take precedence over hanging out with my man. On the plus side, PAX Prime happens about ten minutes from my house, so there's always that.

While I'm on the topic of Sony, I'm quite happy to report that PSN is back up and the PS Store is now functional. Why does this make me so happy? Because I was finally able to re-download AdHoc Party and partake of some online monster hunting using my PSP.

How it works is that it turns your PS3 into a Wi-Fi spot that can connect with other PSP users around the globe. For a game like Monster Hunter Freedom Unite which supports AdHoc-only multi (meaning: local, in the same room) this is an absolute godsend. My son and I were able to hook up with a friend in Scotland and another player in parts unknown, and the four of us went on a successful series of quests. Without AdHoc Party, the four of us would have had to have been in the same room, and realistically, that would have never happened.

For some bizarre reason, Sony has kept this free-to-download-from-the-PSN-store program a secret. With so few PSP games supporting Infrastructure mode (meaning: fully online) they should have been trumpeting the virtues of this program from every rafter. Instead, barely anyone knows about it and I can't recall Sony ever making any sort of an official statement or PR push for it. Talk about stupid moves… considering how much the PSP has been struggling in its early years, they should have done a lot more to get the word out.

I'm still playing through Hunted: the Demon's Forge and it's still unpolished fun. The game is turning out to be much longer than expected, at least twice as long as the average action game of this sort.

I'm not really complaining since I'm still enjoying it, but I'm starting to get that nagging "need to start working on my next review" feeling that pops up when a game I'm playing does not introduce any new mechanics but continues on and on and on.

Again, I'm not saying it's bad (because it's not) but I might have given a second thought to taking it on for review if I'd known how long it was going to be.

Firefly: I have two episodes left and the Serenity feature film to go.

Doctor Who: The wife and I just watched the second half of the two-part cliffhanger (The Rebel Flesh/Almost People) and I've got to say that I'm becoming massively unhappy with the level of writing in the show right now. It's kind of in a rough, middle area—not goofy, light fun as it was for most of the first four seasons, nor is it properly dramatic and fleshed-out enough to satisfy.

For example, this two-parter didn't really strike a chord with me until the end, and by that point the director had already wasted nearly two hours having the characters run around in dark hallways and babble about little of significance. It wasn't nearly as cerebral or as thoughtful as it could've been, and that ending bit (won't spoil it here, but it's not the part you're thinking of) was the only bit that I found even remotely interesting.

I realize that Moffatt (now in control) has written some of the best episodes, but I feel as though he's grossly mishandling the season overall. Too much violence, the characters don't seem to be written in accordance with who they were last season, and it seems as though he's trying to pull off another ZOMG-EVERYTHING-WAS-ALL-CONNECTED like the end of season four. To me, following in those footsteps is a poor goal so soon after a reboot of the reboot… I'd have been happy with a solid season and had it been left at that.

The Sarah Jane Adventures: Still calling myself a Doctor Who fan despite my mini-rant above, the wife and I have been saving this spin-off for when my son arrived. Glad we waited, he seems to love it.

In a nutshell, it stars one of the Doc's old sidekicks in post-TARDIS life as she investigates alien plots, defends the Earth from evil, and other such business. It might not be for everyone since it's slanted towards a younger school-aged audience, basically the opposite of Torchwood's after-dark sensibilities. However, it's quick, jaunty good times and retains enough of the Who flavor to keep us all interested.

Thumbs up so far!