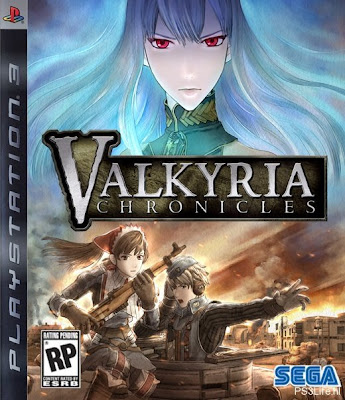 Spent most of the weekend with Valkyria Chronicles.

Despite having a few misgivings at first, the gameplay quickly won me over and I'm now a complete convert. I've got to say, it's certainly one of the best reasons to own a PlayStation 3, and after having made it through a little less than half of the main campaign, I'm shocked that Sony didn't give it more of a push. It's far better than the majority of what's available for the PS3, it's a system exclusive, and it's got loads of both both style and substance.

Although Strat RPGs are still kinda niche, methinks the PR folks totally missed the boat on this one… maybe if they'd STFU about LittleBigPlanet for a few minutes, some other deserving titles like Valkyria could get a little press.

Now that the game's been lowered to $30 brand-new, do yourself a favor and go pick up a copy. It's the most exciting and well-done SRPG I've seen in quite some time, and I'm enjoying the hell out of it.

(And if you get a copy of Valkyria and like it, do yourself another favor and track down Konami's Ring of Red on PS2.

Last I checked, it could be had for $6-$10. Although it's a little more high-maintenance than Valkyria, it's still damned good and there are some definite similarities in the combat system.)

Ironically after writing that post I decided to see how much the game was and ended up being surprised that Amazon were selling it so cheap and still had copies left.

I now have a new copy of the game and look forward to seeing it in action once the heap of dust gathering on-top of my PS3 had been disposed of.

… Perhaps the Wii can offer support? It seems to be adept at gathering dust. ;oP

I’d really like a reason to use my PS3 again (not been touched since MGS4), and while I generally like RPGs, I’ve never played a strategy themed RPG, nor am I overly keen on the game’s setting. I much prefer swords and magic (the usually geeky stuff) as opposed to guns and World War II; I a hard enough time convincing myself to give Fallout 3 a try due to its tone. Over here PS3 games can cost around £45-50, which is a lot to spend on the notion that Valkyria Chronicles might be good. I’d like to believe that… Read more »

Having played Ring of RED about four or so years ago, it’s a comparison I made instantly with Valkyria Chronicles too. I think VC, however, inserts the real-time parts of the game in a much more seamless way. I have a stark memory of waiting for slow-ass mechs moving across the field as I waited for a reload. Ultimately, I found Ring of RED to have a very fast jump in difficulty, despite a story that I was completely getting lost in and I just couldn’t get past it. I’m loving this Valkyria Chronicles praise though, and I hope it… Read more »

I may have to pick this up at some point. I haven’t dedicated the time to a console RPG in ages.