As we near the arrival date of our son (still in utero) we find that we are in kind of a holding pattern… since we've got all the baby stuff and reorganized the house several times over, there's not really a lot to do but wait. Helping us pass the time today was House of the Dead: Overkill on the Wii.

Although the game felt a little bit shallow (and took us about three hours to complete) I've got to say that I absolutely fell in love with the presentation—Headstrong Games pulled a really genius move in positioning the entire thing as a 70's exploitation film. 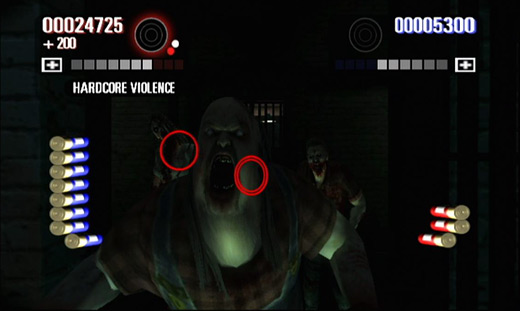 Instead of having it be another laughably stilted "serious" entry in the series, it gains a significant amount of cool by being completely irreverent and quite foul in some parts. (That final "mommy" scene? Eccccchhhh!) Although I wouldn't recommend this treatment for every game, it really works here. After all, light gun games on rails are slightly absurd to begin with, so why not up the ante?

In my opinion, it made the whole thing a lot more interesting than it would have been otherwise, although if you're not in the right frame of mind I can see how it would be fairly irritating… the f-bombs drop with unbelievable frequency and the music will either get you in the mood, or drive you completely insane.

I had a blast with it as a rental, but considering that we were pretty much done with it in one day, I can't really recommend it as a $50 purchase. Still, check it out for the style, if nothing else.