Collecting asteroids has never been so much fun 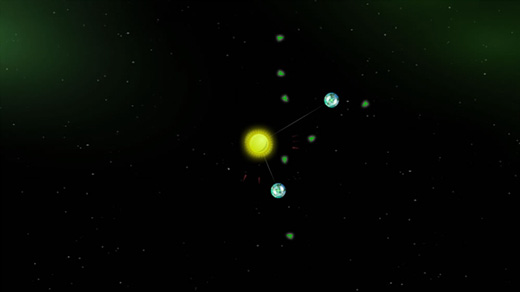 HIGH It's an original, instantly playable effort with great presentation.

LOW It's one of those rare games that ends too soon.

WTF The "creationism" challenge is a clever wink to the player.

With an unusually noteworthy level of elegance and sophistication in its design, Solar in Xbox Live's Community area is just one more piece of evidence that people who've been ignoring the growing homebrew scene tucked away in the depths of the 360's dashboard are missing out.

Solar puts players in the role of a sun traveling the vast expanse of the universe, and offers two modes: Sandbox and Challenge. Sandbox is just what you'd expect. Given free reign, players can explore the cosmos at will, interacting with anything they'd like. Destroy another star and steal its planets, take an orphaned asteroid and nurture it to the point that it can support life, or simply zoom around and try to find the edge of reality. It's all on the plate, with no consequences or penalties.

Challenge will likely appeal to players who desire a little more structure. Consisting of eighteen separate tasks, this mode insists that players explore all the details and systems included in the game's structure. Things like properly understanding how to attract planets into orbit, how the stars grow in different phases, and so on. It requires some finesse while never feeling punishing, although some of these challenges do seem outright impossible. However, as the player progresses through the game with a bit of persistence, new options become available. With some of these options turned on or off, objectives that were out of reach can quickly be achieved.

The real brilliance of Solar is that it's so pleasing aesthetically, as well as in terms of design. The graphics are simple, but there's a clean, uniform look to the overall experience. This same reserved taste extends even into the menus and their layout. Everything feels very thoughtful and polished. Sharing this same manicured quality, it takes only a minute to understand how the game works. Play is streamlined yet still rich, and its simple and uncomplicated nature are quite refreshing when compared to other projects which attempt too much, and fail to master any of it.

The only bad thing I've got to say about the title is that it's over too soon; once the difficult challenges are knocked out, it's back to Sandbox. That's not a complaint, really… more of a compliment. It's extremely rare for me to find a game that ends before it runs out of quality content, but if there were more tasks or modes, I could have easily poured several more hours into Solar and enjoyed every minute.

The product of just one person's imagination and effort, Solar is one more game that most console players like myself would never have encountered without the channel provided by Microsoft's Community. For players who crave something besides the latest loud, multiplayer, photo-realistic committee-crafted "blockbusters," this quirky little corner is becoming a pretty comfortable place to be. Rating: 8.0 out of 10.

Disclosures: This game was obtained via paid download and reviewed on the Xbox 360. Approximately four hours of play were devoted to the single-player mode, and the game was completed one time. There are no multiplayer modes.

Parents: This game has not been rated by the ESRB, but if it were, I'd say it would come in as an E for Everyone quite easily. The only "violence" is the player's sun crashing into other stars and planets; nothing really at all to object to. There is no questionable language and no sexual content. Totally acceptable for players of all ages.

Deaf & Hard of Hearing: You will have no problems whatsoever. The sound effects and music are not tied to gameplay in any way, so there are no significant auditory cues whatsoever. It's totally accessible, with no barriers at all.