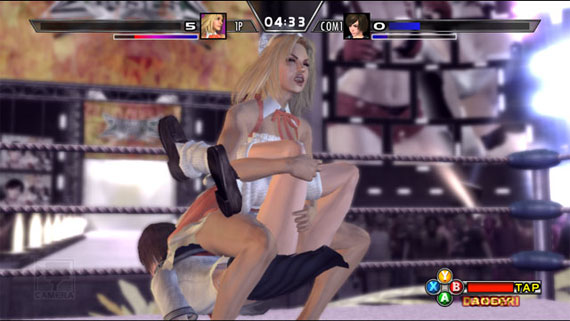 I was a big fan of Rumble Roses on the PS2, but the sequel on Microsoft's 360 was completely crappy in all aspects except the cheesecake factor.  In this particular case, Konami managed to squeak by because the girls looked fantastic but it was still a huge missed opportunity because there's nothing better than seeing fantastic women and playing a game that's actually fun.

Dead or Alive Xtreme Volleyball on the original Xbox was another crappy game, but it was partially interesting because the girls looked good at the time.  (In my personal opinion, they were still playing second fiddle to the ladies from Rumble Roses, but tastes may vary.)

So, I pop DOAX2 (on the 360) in for the first time last night and wow, it's an absolute lose-lose… not only is the game not fun, the girls don't even look that great. 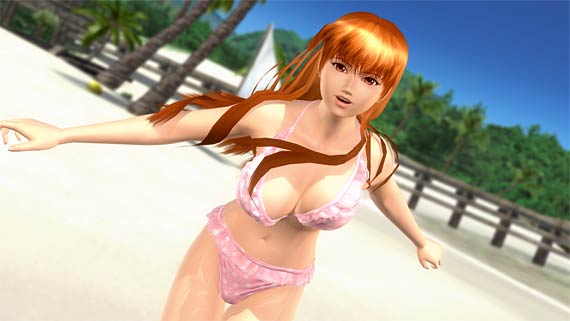 Now I expected the game to be junk just like the first one, although I do have to admit that I was surprised Team Ninja didn't do anything else to the formula besides add a few retarded mini games… Rumble Roses XX may have been shallow, but at least it pretended to be a real wrestling game. DOAX2's "volleyball" is complete crap and feels even less like a game that it did the first time around.

It completely irritates me that the AI doesn't even make an attempt to hit or return the ball half the time, and the other half of the time you can't even see the whole court–  how are you supposed to be in position when your character isn't even visible? Forget about the waterslide or jet-skiing and such, the other content isn't enough to keep somebody occupied for even an hour.

That said, I was fully prepared to just accept the sorry state of gameplay with the ladies taking it off my mind, but the unthinkable happened.  In a game whose sole purpose for existence is to showcase female flesh, the girls in DOAX2 look terrible.

First of all, the breast physics are completely outrageous. The often-touted "bounce physics" now apply to each breast individually, as stupid an idea as it sounds– these mammaries look totally unrealistic and move like they're filled with helium balloons being bounced by some kind of pneumatic motor system housed inside each girl's rib cage.

It's pretty obvious where Team Ninja is fixated, but they really should have poured more resources into the other body parts.  I mean, I don't want to come up sounding like a total chauvinist (although I'm sure I probably already do) but if you're going to make a game about pretty girls, make the girls pretty… this game might as well be called "Impossible Juggs Viewer 2" with the way other parts of the anatomy are virtually ignored. 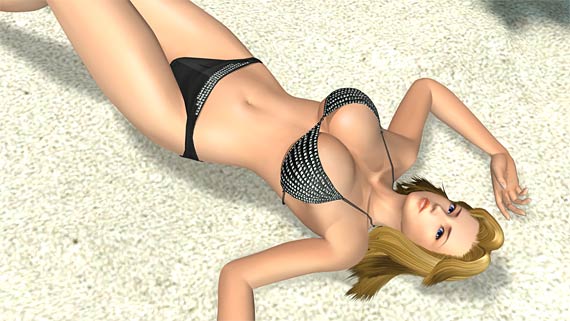 Each character moves unnaturally on goofy-looking feet, coming off more like animated Barbie dolls than real people. The texture work and shading on the skin is sub-par as well… to be really honest, it looks like a lot of the original Xbox content has been recycled and slightly polished rather than remade from the ground up to take full advantage of the 360's hardware. As it stands, DOAX2 is in a bad place on the Uncanny Valley.

I've never been a fan of Team Ninja's character rendering or animation, but when the texture mapping on tree bark is more interesting and impressive than the half-naked girl draped over the top of said tree, there is something seriously wrong.

With regard to the current genre of domestically-released cheesecake, the original Rumble Roses is still the best game in terms of offering tasty visuals with passable gameplay, but the best-looking women overall star in Rumble Roses XX.

Sorry Itagaki… your ninja games suck and your bathing suit games do, too.

There’s a positive side to communication in online games. Relationships and marriages have been built upon the foundations of LittleBigPlanet and World of Warcraft. Gamers who aren’t complete cretins exist, and they’re willing to travel hundreds of miles to see their high-leveled love warriors. It’s like fusing blind dating with online dating, except without the tedium of writing boring “about me” introductions. You don’t hear about this often because people are ashamed of admitting that they fell in love while beheading faux-zombies together in Resident Evil 5. Can you blame them, though? It’s certainly not the most romantic of scenarios.… Read more »

The developers don’t have any obligation to make the game as realistic as they can; they’ve made a decision to anime-fy their characters to a certain degree and some people will like that kind of stylisation, whilst others won’t.

CliffyB is WAY cooler. He made a prettier kill.switch game with a decent background for a story that never really delivers and a chainsaw. So who’s to say that he’s not just a one-trick pony as well? Don’t get me wrong, though. Gears is definitely more fun that XBV. I do, however, think it would be really great if the two guys got together some time and maybe made another kill.switch duck and cover game featuring nearly naked women. Instead of guns they could use water guns! No grenades, water balloons! Anybody with me?? Anybody else think this is a… Read more »

Itagaki is a hack. His one fluke of an achievement is designing a decent battle engine for Ninja Gaiden, a game with severe pacing, camera and artistic flaws. He seems to recognize that too, as Team Ninja is gearing up for its third iteration of the game. Itagaki gained industry-wide recognition for creating a wonderful battle system in a recognized franchise, but he has proven to be nothing but a one-trick pony. He represents, in his personal and games, the worst in the industry: Sexist and overly reliant on his old tricks to release new iterations of the same engine,… Read more »