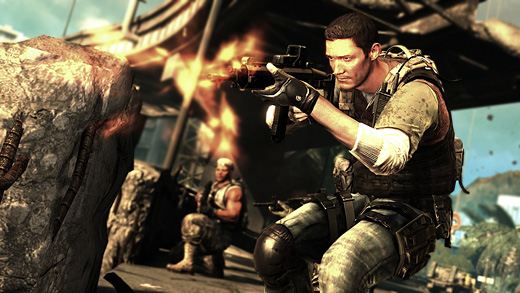 I recently attended a Sony-sponsored media event featuring the PlayStation 3's SOCOM 4: U.S. Navy SEALs, but to be perfectly frank, I didn't see enough of interest to do a full-length piece.

The game is another military-themed shooter with little to differentiate it from any other one, as far as I can tell. It had more of a run-and-gun vibe than I was expecting, but I quickly grew bored with it and ended up spending the rest of the time chatting to fellow journos.

On display and accessible for use were both the Move controller, as well as a 3D TV and accompanying set of special glasses. I gave both a try, and came away thoroughly unimpressed.

As one of my fellow journalists commented at the time, isn't the whole concept of the Move that the motion controls are supposed to be easy to use and feel natural? I had quite a bit of difficulty coming to grips with it, and often found myself pointing straight up at the sky, or struggling to perform basic actions. With the Move, I got picked off by enemies multiple times in a row and quickly grew frustrated. Switching back to a regular controller, I blew through the level with little problem. Suffice it to say, I wasn't exactly motivated to run out and pick up a Move to use at home.

The 3D TV was just as impressive, by which I mean, not. Turning the feature on, I noticed that colors were washed out and that things on-screen were not nearly as sharp and distinct as they were when playing in normal mode. My eyes got tired after a few minutes, and the 3D effect was not only not convincing, but added absolutely nothing to the experience. In fact, it was actually worse, since the graphics were much better running in standard fashion.

I'm not quite sure who Sony is trying to sell these things on, but it's sure as hell not me. If this is the kind of performance people can expect from Move and 3D displays, then the marketing people in charge of the products have got their work cut out for them. No thanks.

This has been a big week for TV viewing at our house. Within the span of a few days, we finished watching all available Torchwood and Doctor Who episodes, and we are now in a holding pattern for the new stuff.

Wow, where to begin with this one?

I suppose the first thing that needs to be said is that it is absolutely deserving of all the praise it's gotten from everyone I know. This five-episode series was just stellar from start to finish, and had so many rich moments that I feel more than comfortable saying it's probably one of the finest things I've ever seen on television.

Without getting into spoilers, I will say that the "children" in the title is meant very literally in the plot. As a parent myself, I find that I am growing more and more sensitive to programs that deal with child-related trauma, and in this program, there's lots. However, rather than being strictly for shock value, I did feel as though the harsher scenes really led to some deep thinking and good discussions afterwards. Honestly, I don't think a program of this sort would even air in America, so I'm grateful that the BBC seems to be much more lenient and open in terms of what's considered acceptable viewing.

That said, think I'm a little emotionally scarred. There are a few images from this program that were instantly burned into my mind, and even thinking about them right now makes me feel a bit distressed. A handful of moments were utterly horrific, and I have a feeling that I won't be forgetting those anytime soon.

My own sensitivities aside, the plot was excellent, the quality of acting was great, and I was quite pleased with the way the writers took the time to explore the character of Jack Harkness more than they had in the previous two seasons. As a character who is immortal and has already lived for several hundred years, I've often felt as though his potential was largely left untapped as the Torchwood team chased each monster-of-the-week. Jack really took center stage towards the end of Children, though, and there was some phenomenal depth on display.

Kudos to everyone involved with Children of Earth, it was heartbreakingly outstanding.

So, the new Doctor—love him. Matt Smith does a fantastic job, and I am 100% on board with his portrayal of everyone's favorite Time Lord. The Doctor's new companion, Amy Pond? Eh, not so much. She's certainly all right, but I find myself not connecting with her, and I think Karen Gillan's acting style feels a little flat to me.

In terms of the season itself, it was generally good. There was certainly a dramatic shift towards increased production values and tone, which was quite a contrast compared to most of the Tennant episodes. It was very appropriate that the writers sort of said goodbye to that era and started fresh, though.

However. there were a few moments I didn't care for. A big one was the way the rules surrounding the evil Stone Angels seemed to get tossed out the window ("Blink" is one of my favorite episodes, mind) and I also didn't care for the underworld adventures with the Silurians. That two-parter could have been condensed down to one episode, and the Silurians themselves were too human for my taste. They didn't even have reptilian pupils, and I'd like someone to explain to me why the females had breasts.

As for the season finale? Not so good. I have to admit I wasn't really a fan of the running "crack in the universe" concept, and the way it tied into Amy Pond failed to resonate. Worse, I felt as though the writers took far too many shortcuts and gave viewers things that just didn't make sense. Granted, Doctor Who can't even remotely be called hard science fiction, but you can only fudge things so much before suspension of disbelief just falls apart. For example, the events surrounding the Pandorica were complete crap, and I nearly did a spit-take when the Doctor made his comment about extrapolating the state of the universe from a few particles.

Although I'm a wee bit sour right now, don't get me wrong—I'm still very much a Doctor Who fan,and still very much looking forward to what comes next. Also, it's worth mentioning that GameCritics will be hosting a special episode of the podcast centering solely on Doctor Who. Look for more information on that soon.

I don't tend to talk about music a lot on this blog for a few reasons, but primarily because I feel as though the vocabulary needed to do a decent music review is an entirely different set of words than the ones that are used to break down videogames. I hate feeling as though I can't do justice to something that I like, but in this case I will make an exception.

The wife picked up "The Lady Killer" by Cee-Lo Green, and it's a fantastic album from start to finish. It's one of those rare discs that you can pop in (or queue up on your iPod) and just let play without having to skip over any "dud" tracks. That's a pretty rare thing in my opinion, but I love it when it happens.

Although Cee-Lo first made a name for himself with hip-hop outfit Goodie Mob, he's been shifting styles with other projects, most famously the Gnarls Barkley St. Elsewhere album. The Lady Killer takes a cue from those vocals and infuses its songs with influences from Prince, early Motown, Earth, Wind & Fire, and a number of others. It has a strong R&B vibe from the era when R&B actually meant R&B and not whatever it currently represents. That's an extremely good thing in my book.

Your observations on the shortcomings of that particular experience with 3D reminds me of a recent Roger Ebert blog post. Seen here:http://blogs.suntimes.com/ebert/2011/01/post_4.html

The washed out colors appears to be standard and the way 3D works does not jive with the human brain.

Hey Jimu. In reference to the Angels, there were a few things. Primarily, one of the main plot points in “Blink” is that they kill their victims by sending them into the past. I mean, that was the *entire* premise of the episode. When we see them again in season five, they do no such thing, instead resorting to simple violence. Another deviation is that it stated that they revert to stone when someone is looking, yet Amy escapes being stuck in the forest by “pretending to look”. This makes no sense, since the Angels often move in darkness or… Read more »

How did the rules change for the Angels?

Missed that one completely…