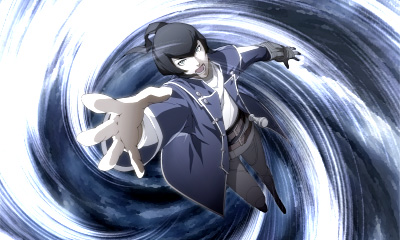 Although I count myself a Shin Megami Tensei (SMT) a fan in general, I had some hesitation about jumping into SMT IV on 3DS. I haven't been the biggest fan of the portable SMTs and nothing about the previews was really grabbing me. However, the Nintendo offer of $30 eShop credit when combined with purchase of Fire Emblem: Awakening (which I already had, and loved) was too much to resist, especially since I had a couple of games to trade in for credit.

When all of that was factored in, it wasn't much of a risk and I'm glad I didn't lose too much of my own money on it, because I bailed at around 8 hours or so, and I didn't feel conflicted about doing so.

I think the biggest issue I have with it was that the story wasn't very interesting, and it didn't seem as though very much effort was put towords the writing.

For example, the plot is that the player is a "samurai" who lives to exterminate demons, yet you immediately begin recruiting demons and have them on your team like it's no big deal. None of the characters make much of a fuss about it, and if there was any sort of narrative explanation given, I didn't see it. It reminds me a lot of Blood Mages in Dragon Age II—they are seen as evil and reviled, but if the player chooses to go that route in building their character, no one in the world reacts to it.

The rest of the story fell pretty flat for me. Nobody responds strongly (or at all) to certain revelations, and it's blindingly obvious that one character is "order" and another is "chaos" and that the player will eventually have to decide how the world will be remade. It's a recurring theme in this series and it's fine enough, but I'm starting to get the feeling that the team is becoming a bit lazy. That concept did not fit very well with the samurai conceit, and I wish the team had done more to rework things so that it all came together more tightly.

Otherwise, despite liking the navigation and playing dress-up with my main character, there wasn't much to enjoy. It's the same basic demon-management game that all of the SMT titles are, but without strong characters or plot, I felt little desire to go through the motions again.

I also felt like the SMT series usually has strong art, but IV was a mess. The 2D presentation was very muddy and unappealing, and the demon sprites were all cannibalized from other games. The variation in art style was quite jarring and made the game feel as though it lacked cohesion, visually. What made it worse is that I recently revisited Etrian Odyssey IV (also a 2D dungeon-heavy game) and that title is absolutely beautiful—cleanly-drawn sprites, lots of color, nice animation… It's a joy to look at. In comparison, SMT IV looks like a pile of dog food.

It's not the worst game I've played by any stretch of the imagination, but with Persona 2, 3 and 4 easily available on top of SMT: Nocturne and a handful of the other SMT games that can be tracked down (yay, Raidou!) I really don't see any reason to spend time on something that feels as second-rate as IV does. Not recommended. 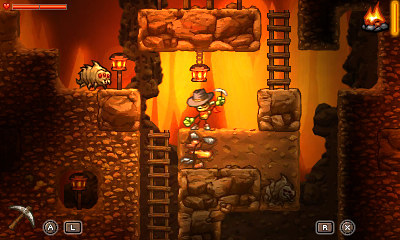 In other 3DS news, I've been playing Steamworld Dig and I think it's pretty great.

The premise is that you're a robot whose uncle has died and left you the mine he had been excavating. You get to town and start digging right away, and things seem straightforward enough—dig tunnels that descend through the mine, but be careful because your character needs to be able to climb back up. Collect some precious metals, buy a few upgrades, and so on.

However, things soon get pleasantly more complex when you start finding new abilities and eventually turns out that there is something at the bottom of the mine…

I haven't completed it yet but it's very cute, controls well, and I think the idea is a good one. There's also something quite satisfying about collecting bits of ore and navigating the underground honeycomb… Maybe it's the dormant OCD in me, but it's definitely scratching a certain itch. Recommended.

It's been a long time since I watched any TV show in marathon fashion, but the wife and I recently started Orange is the New Black (Netflix original series) and we watched the entire first season of 13 episodes over the course of three days. That may not be much of a marathon to some people, but for us it's pretty unusual. 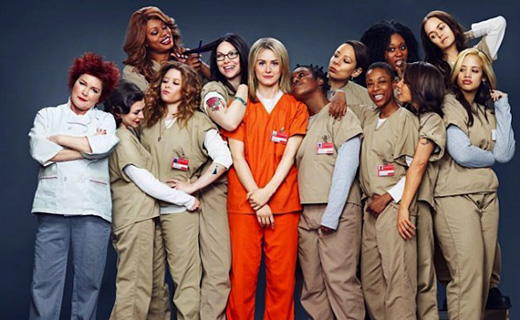 The premise is that a well-to-do, white, upper-class woman gets convicted for a crime she committed 10 years in her past, and as a result, must put her current life on hold to serve a totally unexpected prison sentence. Once she's there, the show goes through some of the usual fish-out-of-water motions, but it quickly becomes more complex and interesting thanks to the strong writing.

To start with, the cast is almost entirely female except for a few of the guards and administrators, so seeing so many female characters front-and-center is refreshing.

More than that, I also appreciate that there isn't very much black or white to be found—the main character herself goes back and forth between being someone you feel sorry for, and someone who deserves what she gets. Other characters display similar swings… Someone I couldn't stand at the beginning became someone I supported of at the end, and the queen bitch of the show is later revealed to have entirely honorable motivations.

These characters feel real to me in the way that they each have multiple aspects to their personalities, and none are as simple as they appear on the surface. When the series reveals some of their backstories, it's almost heartbreaking to witness what their life was like before they ended up behind bars.

The show also deserves credit for getting so much of the prison atmosphere right. I actually worked in a prison myself for about four years and much of what I was seeing on my screen was an accurate reflection of what I saw in my daily life back then. There are certainly a few liberties taken here and there, but in general, I was impressed.

Overall, this is one of the best series I've seen in some time, and I'm looking forward to the next season. Here's hoping that Netflix doesn't keep us waiting too long. Recommended.