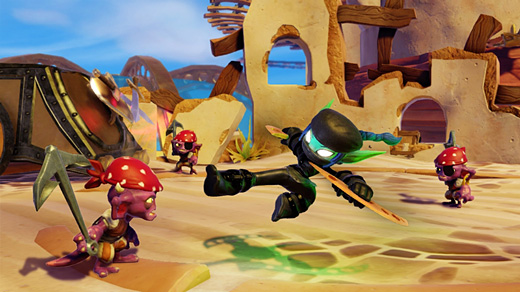 HIGH Health items and money are finally shared between both players!

WTF The crab is… powershnitzel?

When it comes to games, it's rare to find a franchise where every new installment is better than the last. However, that's exactly the case with Skylanders.

The first entry, Spyro's Adventure, made a huge splash in 2011 with innovative use of collectable figurines and a Diablo-lite experience for the younger set. 2012's Giants polished some rough edges and added characters able to perform strength-specific feats. It wasn't a mindblowing leap, but it was an improvement on a good thing.

is here. While other franchises fall prey to creativity-draining annualization, Activision not only manages to avoid fatigue, they kick everything up a notch—this third entry is the best one yet.

While Swap Force doesn't reinvent the formula of the previous two games, it's hard to argue when they've already got it so right. Players still adventure through a series of themed lands, smashing crates and pounding cartoonish baddies in an effort to defeat series "villain" Kaos. The ridiculously lucrative mechanic of selling new characters as small statues at retail is also still in full effect. (Cha-ching!) Those who've played Skylanders before know exactly what to expect. However, original developer Toys For Bob handed duties for Swap Force over to Vicarious Visions and they nailed it.

For starters, the new "Swap" figures are a great addition. Their twist is that each one can separate into a top and bottom half, and these pieces can be combined with others to create mix-and-match characters. Like Magna Charge's blaster arm, but want the floaty teleporting of Hoot Loop? No problem. Pop them apart and assemble Magna Loop for the best of both worlds. Need some crowd control? Grab Wash Buckler's lower half and make Magna Buckler. There's an absurd number of combinations, so players will certainly discover at least a few which suit their particular taste. 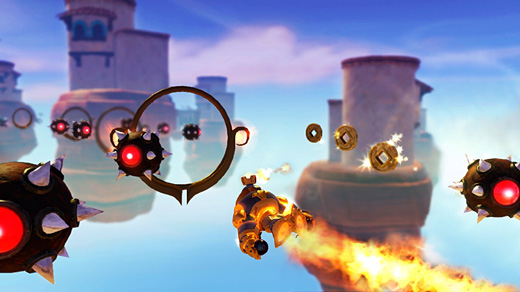 These neat characters also have another trick up their sleeve—throughout the adventure are several Swap-specific challenges which require a particular type of locomotion to access. It's similar to the older gated areas which required a particular element to enter, but rather than being just another normal area, these Swap sections offer completely different types of gameplay. Characters with rocket feet will find themselves flying through rings in the sky, while those with bouncy bottom parts clear pogo challenges, and so on. These diversions offer a nice bit of variety, and most of them are quite enjoyable. (The pinball minigame can go hang itself, though.)

The rest of the game remains largely the same, although it's all been freshened up. The incredibly frustrating jump pads of the last two games have been smartly replaced with normal platforming and characters who can now jump independently. There are fewer annoying puzzles that bring progress to a halt, there's a greater emphasis on smoothly-flowing action, and there are a number of surprises scattered throughout—certain areas resemble 2D action games, others are combat-free, and in general, the side-tasks sprinkled throughout keep players on their toes.

Interestingly, Vicarious Visions revamped other, less obvious aspects as well. Every character has been visually redesigned to look more dynamic, and their power levels have been rebalanced. The central hub world is now easier to navigate, and it's quicker to cycle through characters when trying to upgrade. There's also been an effort made to flesh out the world by incorporating previous character types as NPCs. Best of all, players in co-op finally share money and health pickups, eliminating the ill will that comes from fighting over resources. Series fans are sure to appreciate these excellent improvements, and newcomers will benefit from the get-go.

As far as complaints go, there aren't many. I'm generally a fan of story modes, but there's still too much talking in cut-scenes that pop up too often. It's not nearly as tiresome as it was before, but it's reasonable to assume that this title is aimed primarily at younger players, and both of my sons are visibly impatient when the action stops for "hilarious" banter. (Their dad is too.) Besides that, there were a few unexpected difficulty spikes here and there, and it can be difficult to find secrets hidden by camera angles that the player can't adjust. Those are all small gripes, though. This is one polished, pleasant experience.

As a fan of the series and also as a father who's always looking for quality games for his kids to get into, Skylanders: Swap Force

is easy to recommend. It looks great, it plays great, it's appropriate for all ages, and it's a genuine improvement on what the series has delivered in the past. I suppose my only caveat is that amassing an army of figures to can quickly start adding up to a significant cash investment, but this is one case when I definitely feel like the return is worthwhile. Rating: 8.5 out of 10.

Parents: According to the ESRB, this game contains cartoon violence. Things never get more graphic than a pirate octopus shooting bubbles at goofy robots, or a purple pincushion creature tossing spikes at cartoonish bad guys. As far as "violence" goes, the only thing tamer is playing pattycake. There's no salty language and no sexual content whatsover. The game is expressly made to be family-friendly, and it is.

Deaf & Hard of Hearing: It's disappointing to say, but the game completely fails to add subtitles for the many pre-rendered cut-scenes that tell the game's story. Text is available during normal gameplay, but this oversight is a big one. Otherwise, no audio cues are necessary for gameplay—there's no difficulty in actually playing, but deaf and hard-of-hearing players will have to look up an FAQ to read the dialogue that's missed.