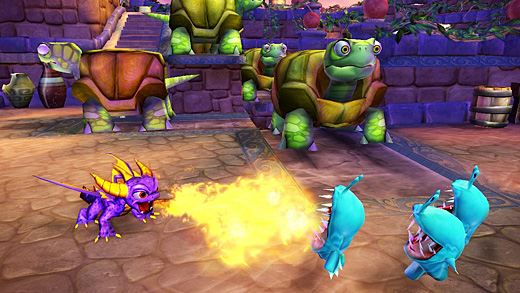 HIGH Discovering how much each character can evolve.

LOW Trying to platform with two people and failing miserably.

WTF Who thought the separate-purchase add-on levels were fun?

I'm not a developer, but I don't need to be one to know that it's damned difficult to make a good kids' game. Even harder? Making one that satisfies kids and their parents.

As a father who supports video games as a family pastime, finding titles everyone can enjoy is a huge challenge. More often than not, my sons have to play titles designed for older folks—there's just too much kid-oriented garbage out there that mommy and daddy can't put up with. As such, when a game like Skylanders comes along and satisfies every member of the house, it's time to celebrate.

At its core, Skylander's Spyro's Adventure

is a simplistic third-person dungeon crawler built for one or two players (couch co-op only) that wouldn't be especially memorable if not for the brilliant twist that makes it what it is: the inclusion of action figures which represent playable characters. (Fair warning, each character apart from the game's pack-ins are around $10, and the four add-on levels are $20.) Although it's tough to grasp the appeal of this toy/game hybridization without laying hands on it, once a player does, the magic of the concept is clear as day.

After placing one of the game's 32 figurines atop a small, circular "portal" peripheral, this hardware then reads which character is present and instantly inserts it into the game for use. The physical sensation of moving the statue onto a pedestal and then seeing that it spring to life on-screen is utterly novel, and quite unlike anything else I can think of.

However, to say that Skylanders is successful solely due to this mechanic wouldn't be fair. In truth, a lot of hard work and attention to detail went into making each character different and appealing, and it's the little touches that make the game so impossible not to like. 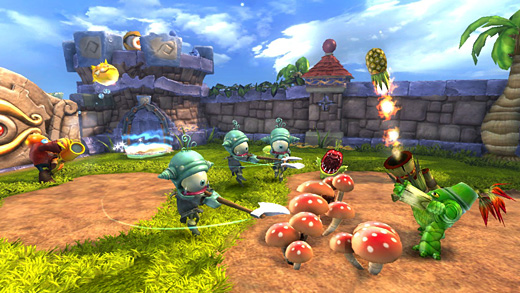 Each of the Skylanders (of which the titular Spyro is just one) feature warm, appealing designs that have just enough edge to jump the gap from "kiddie" into "cool." Animations are smooth and distinct, and half the fun is discovering the varied abilities each one has. Simply plowing through the story isn't much to write home about, but earning money to unlock upgrades is a goal unto itself since boosts are often substantial and graphic. This rewarding feedback for the effort put in is the keystone that Skylanders rests upon.

Starting off with a character like the gryphon Sonic Boom is fine, but the appeal would soon wear off if not for constant development keeping the player invested. First her sonic scream gains a noticeable bump in power and a visually discernible change. The next upgrade awards flight. With a little more grinding, she can have a small squadron of mini-gryphons in tow, all of them supercharged with an audio aura.

Each character undergoes a similar ascension, and the curiosity to see what gets unlocked next is strong. Even better, the characters rarely disappoint—air-based turtle Warnado tucks inside his shell and rides a storm. Cyborg dragon Drobot evolves into a walking laser battery, and phantom Ghost Roaster can transform into a huge green skull, shrieking indestructibly across the field of play. My children were just as eager as I was to earn every power for every character, and it gave us plenty of reason to buy and cycle through as many as we could.

Apart from this fascination with the toys and the way they magically translate on-screen, the developers have made other choices which make Skylanders great for kids—things like implementing a fixed camera for each level, removing the need to manipulate the viewpoint with the right stick of a controller. Constantly babysitting the camera isn't a big deal for older players, but it's difficult for young ones. Removing this problem from the equation was a smart move.

Another plus is the deceptive level of intricacy in each area. Toys For Bob clearly knows that kids will be replaying levels over and over, so there are a ton of secrets to discover. Apart from hidden items, switching characters yields different results and keeps play fresh. For example, some obstacles can be circumvented with flying characters, and swimmers can take water-based shortcuts that other characters can't. I played through the game a total of three times myself, and each time I found little things that I didn't notice before. In fact, it was my kids who would frequently point these nuances out to me, so the work that's gone into the levels has clearly paid off. 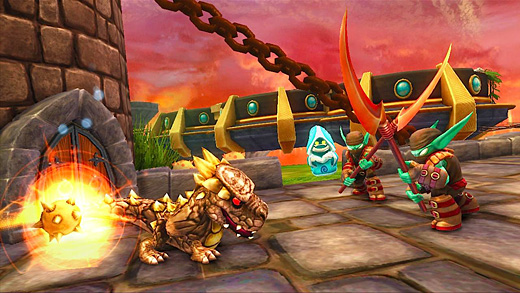 That said, for all the kid-friendly decisions made in Skylanders, there were a few that left me scratching my head.

The biggest puzzler had to be the platforming. While the characters don't have a native jump function, there are areas where players must bounce up to higher levels or cross gaps with the help of jumping pads. These sections were horrific thanks to sloppy mechanics and the game's insistence on keeping players together. If one person makes a jump but the other doesn't, the game will reset both players back to the start and ask them to do it again. And again. And again. A high level of coordination is required to get through these as a pair, and the usual result was frustration and annoyance. In fact, we often had one player simply exit the game so that the remaining character could get through without being hindered—not a great solution for co-op.

Less serious issues included certain screen-rotating puzzles and bosses which I felt were too difficult for younger players to solve alone, and the aggravating decision to make players compete for experience and money. For a game which seems so supportive of working together, giving all rewards to the character who's physically closest to them means that the far-away player lags behind. Would it really have been bad to have money and experience awarded equally to both players?

(Oh, and the writing and cut-scenes? Painfully boring and long-winded. I would advise the developers to come up with better jokes and cut each story segment by at least half. My kids weren't entertained, and neither was I.)

While these strange decisions seem a little off for a project quickly becoming the 900-pound gorilla of the kids' genre, they don't significantly detract from the overall experience, and the powerhouse sales numbers seem to agree. Without a doubt, Skylander's Spyro's Adventure

is the best family-friendly, everybody-pleasing title I've seen in quite some time, and has handily eclipsed that other collect'-em-all franchise as the go-to at our house. Parents, you better brace your wallets… You will want to buy them all. Rating: 8.0 out of 10.

Parents: According to the ESRB, this game contains cartoon violence. Moms and dads shouldn't have any worries—this game is designed from the ground up to be kid-friendly and as inoffensive as possible. The graphics are cute and colorful, there is no graphic violence, salty language, or sexual content whatsoever, and the most intense things get is watching adorable monsters beat up slightly-less-adorable monsters. It's as safe as a bowl of cereal, if you ask me.

Deaf & Hard of Hearing: While the majority of the game is subtitled, I'm disappointed to say that there are no subs for the pre-rendered cut-scenes. It's a strange omission and one that is disappointing to see. It has no bearing on gameplay, but it's such an easy fix that it's a shame it wasn't caught. While actually playing, there are no significant auditory cues, so hearing-impaired folks won't have any problems.

As a fellow parent gamer having to buy more toys to get more out of the game is the exact reason I will avoid this title.

Every year I ask friends and family not to buy more toys for my son and every year they do.

This coupled with the fact that we are on a budget really puts me off.

Glad to hear you had so much fun. I can’t wait til my son is old enough to game with me. 🙂