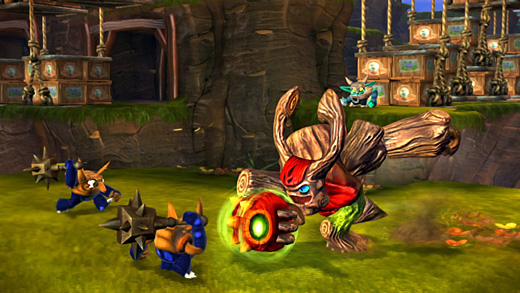 HIGH Getting another chance to use all the figures I spent a fortune on!

WTF Why do fire-element creatures take damage from fire?

Although I don't think many people would have guessed it before launch in 2011, I think it's fair to say that Skylanders has become one of the biggest things in kids' gaming since Pokémon. There's something undeniably magical about placing a figurine on a glowing pedestal and watching it spring to life on a TV screen, and I haven't met a person yet who didn't think the game was a fantastic idea after trying it. After finding such phenomenal success, it was inevitable that there would be a sequel, and Activision hasn't disappointed.

The developers of Skylanders: Giants

have wisely crafted an iteration of the first game without any major changes. However, anyone who knows kids knows that they're not generally fans of radical updates to things they enjoy. For little ones, familiarity and routine are comforting and welcome. As such, the third-person dungeon-crawling in Giants is almost exactly the same as it was last time, and that's not a bad thing.

For those who've never played either title, most of what I wrote for the original Skylanders holds true. Rather than simply repeating myself, I'll detail what few differences there are: the campaign is (of course) all-new, the graphics are sharper and more colorful, there are more items to collect and most actually serve a purpose, and there's now a dedicated battle arena for players who just want to jump in and kill some stuff.

Another difference between the two titles is that there's been a subtle shift in the design of the new characters. Apart from the obvious giants (essentially, taller Skylanders able to lift heavy things) the new faces like Tree Rex, Jet-Vac, Fright Rider and the rest start off noticeably weaker than the first series of characters did. Consequently, the first few upgrades purchased feel more like getting these guys up to speed rather than representing any meaningful advance. On the other hand, almost every new character feels as though they reach a greater level of nuance and efficacy once fully powered-up—it just seems to take longer to get there.

(Side note: Out of the 48 characters in Series 2, only 16 are brand-new. The rest are slightly modified reissues of past characters. Parents on a budget can breathe a little easier by ruling out the "repeats" this time around…)

While the game remaining basically the same was quite all right for the most part, something that should have been improved was the constant interruptions during play. Although the writing is better in Giants than it was in Spyro's Adventure, it still feels like there's far too much of it, and it's not limited to cut-scenes between levels. Every few minutes, one character or another pops up to talk about something that hardly seems relevant, or to repeat gameplay hints that have been drilled home several times.

Worse than the chatter, the level designers (again!) don't seem to have considered that asking two players to jump across a gap in sync is incredibly difficult when the camera can't be moved and the on-screen characters must remain within a certain distance from each other. What would be a simple leap for one person becomes hair-pullingly frustrating for two, and with a small child, nearly impossible. I absolutely dreaded every time we were asked to make a jump, and I have no doubt in my mind that there must be a better way to do this. Fix, please!

Those gripes are legitimate, but in the big scheme of things, they're fairly minor dings. Skylanders: Giants

remains every bit as satisfying to play as the original was, and in my house at least, it's still the game of choice when the family is in the mood to pass the controller around. I don't say this often, but I'd actually like to see new installments in this series come out more often—I've got a whole bunch of plastic figures sitting on my desk as I write this review, and I'm looking forward to the next time they'll see some action. Rating: 8.0 out of 10.

Parents: According to the ESRB, this game contains cartoon violence. Moms and dads shouldn't have any worries—this game is designed from the ground up to be kid-friendly and as inoffensive as possible. The graphics are cute and colorful, there is no graphic violence, salty language, or sexual content whatsoever, and the most intense things get is watching adorable monsters beat up slightly-less-adorable monsters. It's as safe as a bowl of cereal, if you ask me.

Deaf & Hard of Hearing: While the majority of the game is subtitled, I'm disappointed to say that there are STILL no subs for the pre-rendered cut-scenes. It was a strange omission in the first game, and one that is disappointing to see persist. It has no bearing on gameplay, but it's such an easy fix that it's a shame it wasn't added. While actually playing, there are no significant auditory cues, so hearing-impaired folks won't have any problems.