You got Your Bullet-hell in My Side-scroller! 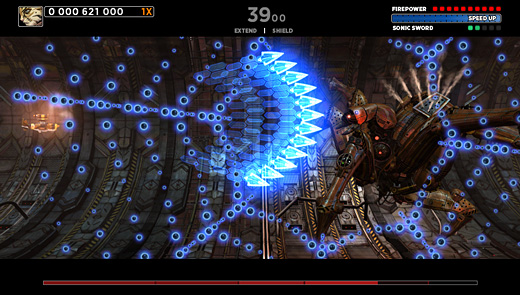 HIGH It's… so… damned… pretty…

LOW Flying through the debris chute and failing to avoid the lasers.

WTF Why are the other powers not in story mode?

Earlier this year, my fellow reviewer Brandon Bales covered the Xbox 360 version of Sine Mora and found it worthy. This little-known shooter has now made its way to the PlayStation Vita, and after getting my hands on it, I can only agree with Brandon's evaluation. In fact, I'm fairly convinced that this new version is even better, since the subject matter is perfectly suited to being played in short sessions while on the go.

While the nuts and bolts were covered in the main review, I don't think the other B gave enough credit to the game's core design. Although there are infinite variations, I think it's safe to say that the shooter genre basically breaks out into two main camps: the side-scroller, and the bullet-hell. Although I'll play both and have enjoyed many, I was incredibly pleased with the way Sine Mora blends them into one harmonious package. Reserving frantic projectile orgies for the boss encounters while turning the intensity down during other parts of each stage gave the game a near-perfect balance that never felt repetitive or exhausting.

Apart from the smart design, I was in awe of the absolutely beautiful visuals. I wouldn't say that I was a graphics whore and I don't often make a point of bringing up technical bells and whistles in my reviews, but Sine Mora is arrestingly delicious on the Vita's sharp display. So much so, in fact, that I often caught myself flying into a game over because I was so taken with the sights. This title is absolutely stunning, and would be a great candidate to show friends who are curious as to what the Vita can do.

Graphics aside, longevity and replay have always been concerns for shooters, and I was impressed to see that this one can hold its own. Although there are no extra stages or new challenges outside of what's covered in the Story mode, the developers included Score Attack and Arcade modes, and there are a couple of twists to them. The first is that players can select any aircraft and any pilot that they've unlocked in the campaign. The second is that the non-Story modes add new Rewind and Reflect abilities to the standard slow-time from the main game. Changing these variables makes the game feel fresh for much longer than a shooter usually would, and learning to master the new powers is a challenge unto itself.

If there was anything to criticize about Sine Mora, it would be the story. Unlike the majority of its shooty-shoot brethren, the developers have actually taken the time to craft an intriguing plot to go along with the action. The gist is that a time traveler's son is killed in battle, so he gathers allies and decides to rewrite history in an effort to get revenge on the one who pulled the trigger. Although it's a solid premise and I was genuinely interested, the tale is told in vague snatches with a lot of names and places that don't mean anything without context. I suppose it's a small complaint since this type of game has never been about storytelling, but it's a shame to see the elements of a good story fail to come together.

My very minor disappointment with the story aside, Sine Mora is an outstanding shooter that excels in every other area—the design, aesthetics and mechanics are all top-notch, and couldn't be a better fit for the Vita. For players who own Sony's machine and have an appreciation for games of this sort, they honestly don't come better than this. Rating: 8.5 out of 10.


Disclosures: This game was obtained via publisher and reviewed on the Vita. Approximately four hours of play were devoted to the single-player mode, and the game was completed. There are no multiplayer modes.

Parents: According to the ESRB, this game contains strong language and sexual themes. There are a few strong curse words during some speeches from the pilots. Sexual themes are only hinted at in dialogue, and are not overt in any way.

Deaf & Hard of Hearing Gamers: All dialogue in the game is delivered through text, and there are no significant audio cues necessary for play. It's totally accessible.

… is just more evidence of the industries lack of creativity. Sine mora has to be one of the worst games in terms of gameplay mechanics released in a long time. Powerups don’t stay on screen they can fly off the screen permanently. That is a big no-no, reeks of developer newbdom or a total lack of understanding of the genre. There are just so many idiotic mistakes made by the developer in this game. The game has way too much cut-scenes and fancy graphics and too little depth in terms of gameplay. While the graphics are beautiful and well… Read more »

Great review, Brad. Thanks for covering this underrated gem. I must admit, I completely missed this game the first time around, until it came available for the Vita. I’ve been enjoying it in between games of Persona 4 Golden. A couple points I need to take issue with: “Although there are infinite variations, I think it’s safe to say that the shooter genre basically breaks out into two main camps: the side-scroller, and the bullet-hell.” A false dichotomy. I understand what you’re trying to say. But historically, the “bullet hell” style and the side scroller are not mutually exclusive. CAVE,… Read more »