Don't Judge a Book by its Franchise 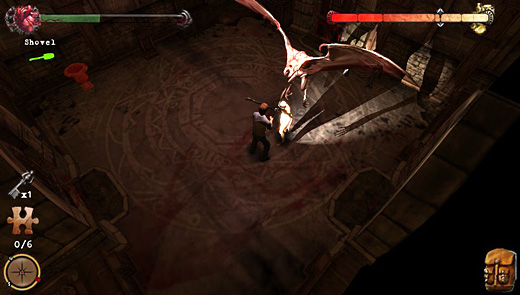 LOW The first two hours of play before GameFAQs.

WTF Why is so much vital info unexplained?

This isn't the Silent Hill: Book of Memories

review I had intended to publish.

I had originally drafted a completely different piece after ten hours of play, but held it back because I wanted to finish the game first. After rolling credits, I thought about my experience some more, scrapped what I had, and rewrote it again. And again.

This review you're reading now? It's my fourth rewrite, and I'm not still happy—I just have to move on to something else. If not for the reality of deadlines, who knows how long I'd be waffling over it?

…In case you haven't picked up on it yet, I'm feeling a wee bit conflicted about Book of Memories. After all was said and done, it was, shockingly, one of my favorite Vita releases to date. I'm an admirer of top-down dungeon crawlers, roguelikes, and titles that twist expectations. This one checks all of those boxes, and does so handily.

If that was all there was to say, then I would've given this title a happier number and called it a day. Unfortunately, it took a lot of time and effort to reach the level of enjoyment I experienced at the end. As a reviewer, I'm torn over how much of the game's early unpleasantness I should forgive.

The problem with Book of Memories is that many standard niceties are absent, and some core mechanics are left awkwardly unexplained. Basic stuff that anyone could rightly expect to find in a modern title is missing—weapon stats and subtitles for cut-scenes are nowhere to be found, info on avoiding hair-pullingly lethal traps is buried in the menus, and changing accessories couldn't be less intuitive.

Even worse, the single most crucial aspect of gameplay—the Karma system—is barely mentioned. Not only does it affect what ending is received, it's also tied to vital special abilities that keep the player alive. Karma is so important, in fact, that after learning its intricacies, it changed the entire way I approached the game.

Without understanding what the developers have crafted, the player won't experience much except frustration and annoyance. My strongest recommendation is to track down a FAQ and read as much as possible about it before starting, and don't be concerned about spoilers because it's a miserable experience otherwise. However, once the veil of mystery is lifted, Book of Memories is actually kind of… great.

Though it shares the same ‘rusty metal & bloody nurses' motif the series is known for, the developers flip the Silent template by kicking story to the curb and putting the action front-and-center. Longtime fans have voiced their disapproval (most of them without having tried the game, I'm guessing) but the IP was overdue for a shakeup. To me, this was a pleasantly surprising direction to go.

Health packs and weapon-repairing toolkits must be saved for dire emergencies, because it's unknown when stocks can be replenished. Fending off bloody, misshapen enemies causes weapons to break, forcing the player to become proficient with several different attacking styles, and the nuances are varied. Searching rooms for items and finding unexpected treasure or a fully-charged flamethrower is a great feeling, and constantly weighing risk-versus-possible-reward keeps the brain happily occupied.

Those searching for the traditional Silent Hill experience on a portable (story? What story?) should stay far, far away. However, players who enjoy dungeon crawling and aren't afraid of a little difficulty will find that Silent Hill: Book of Memories

gets it pretty right—it's just a shame that an FAQ is required to enjoy it. Rating: 7.0 out of 10.


Disclosures: This game was obtained via retail store and reviewed on the Vita. Approximately 22 hours of play were devoted to the single-player mode, and the game was completed. No time was spent in multiplayer modes.

Parents: According to the ESRB, this game contains blood and gore, language, suggestive themes, and violence. Parents, this ain't one for the kiddies. It's bloody, the audio is very creepy, and there's all sorts of nastiness happening in the few story bits that exist. Keep the little ones away from this game.

Deaf & Hard of Hearing: WayForward should be ashamed. Although story plays a minimal part in the game, there are no subtitles for any of the cut-scenes, nor for any of the story bits which are delivered via audio-only. Certain sound cues are also valuable in telling the player when monsters are present, and when rooms are clear. Hearing-impaired gamers are at a disadvantage here.