I had originally intended to write about Avalon Code tonight, but before I get to that I have to discuss Trials HD.

Anyway, never in a million years would I have predicted that I would have become as obsessed with this game as I have, but it's been dominating my life for the last few days. 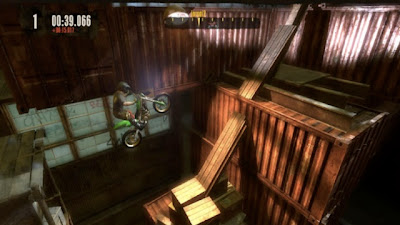 Reminding me a lot of an updated Excitebike early on, I knocked out the first few clusters of levels pretty quickly. I didn't get gold medals on all of them, but I did well enough to satisfy my own personal sense of achievement. Moving up, the Hard level was indeed hard. When I got to Extreme, I couldn't believe it.

Now, I'm totally fine with games presenting challenge, but there are just certain lines that shouldn't be crossed. Certain places that a good game should never go. At some point, the developer needs to take a step back and say "you know what, this is just too much. Let's scale this down."

The Extreme levels require such an incredibly high level of finesse and precision that I'm sure an overwhelmingly large majority of people who download the game will never complete them.

(And I can already hear the 'core response: it's okay to have a level of difficulty that crushes most players!! I might agree under certain circumstances, but not in this case.) 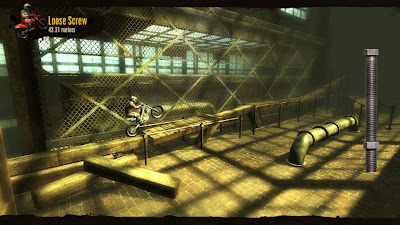 A big issue I have with the Extreme level is that the game's challenge hinges on its physics. In general, I think the physics are spot-on and implemented extremely well, but these last few sections demand near-flawless execution. With the way physics engines are implemented in games these days, this equates to infinitely fidgety, over-sensitive situations that require an almost inhuman level of micro-adjusting to get through. Operating on a level this intense, videogame physics just get squirrely.

In the Inferno II level (the game's last) I was stuck on one particular set of jumps that took close to 2,500 attempts before I finally got a handle on them. I can't remember the last time, if ever, I spent that much time on getting past a barrier in a game. Honestly, I was getting stressed and agitated, and my wife was becoming concerned for my mental health.

Why didn't I quit? It was probably a combination of sheer pigheadedness and determination on my part. That said, the developers clearly spent a lot of time and effort in crafting their game. Despite my annoyance, don't get me wrong—Trials HD is a great title that's got a lot going for it, and it's easy to see all of the thought and craftsmanship that went into it. I guess I didn't want my fond memories of the early stages to be permanently tainted by the bitter taste of unconquered Extreme. 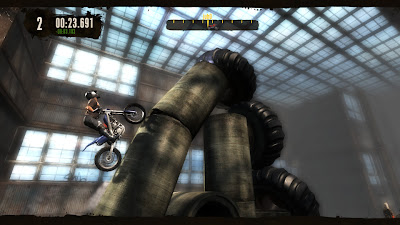 In any event, that bleeding ulcer I cultivated finally paid off when I completed the last of the Extremes today. I was on the verge of delirium when something just clicked and I was able to tap into some unknown in a reserve and push through to that beautiful, beautiful finish line.

Rather than a sense of victory or completion, what I mostly felt was just a sense of "thank God I don't have to do that again." It's not really how I like to end most games, but considering that I ended it at all, I'll take it.