The Best Possible Way to Spend a Buck. 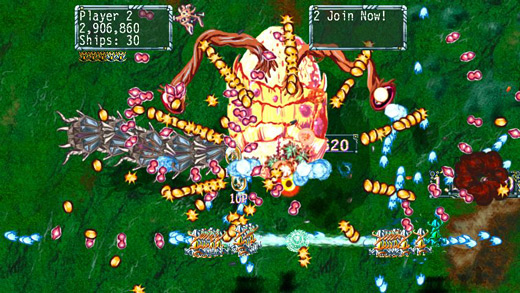 LOW It's over too soon.

WTF Where's the rest of that giant android lady?

So, what can you buy these days for a dollar? A small pack of gum? That's do-able. A candy bar? Certainly. If you've got it in quarters, amassing a four-strong army of aliens packaged in plastic eggs can be done. Besides those sorts of options, the dollar doesn't buy a whole lot unless it can be spent on the Xbox Live Indie channel. In that case, a hundred shiny pennies can be exchanged for one sweet little shooter.

The second Indie release from Mommy's Best Games (one of my favorite developers) Shoot 1UP is a mostly-vertical scroller that delivers brilliant, never-before-seen flavor.

Like most of its kind, the player takes control of a ship at the bottom of the screen and blasts away at enemies approaching from the top and sides. Survival is the foremost concern, though amassing a high score soon becomes the real goal. However, this is no regular shooter. As Mommy's Best Games proved with their last release, Weapon of Choice, their specialty is taking an established formula and turning it on its ear. Successfully repeating the trick, Shoot 1UP stands apart from the rest of genre in two ways.

The first difference is that instead of banking extra lives for use after death, every one-up collected appears on-screen and at the same time. Not content with one active ship and a number in the upper-left corner designating how chances remain, Shoot 1UP puts an entire swarm of player-controlled ships out to wreak havoc on the opposition. It's crowd control, but in reverse.

The second big addition to the genre is that these player-controlled ships can be clustered together tightly to avoid incoming fire, or spread out in a wide array taking up the bottom half of the screen. When close together, firepower is dramatically reduced, along with the score multipliers awarded from enemy kills. It's easy to maneuver, but the game is more difficult thanks to the lack of offensive capability. When spread apart, the player's ships are more susceptible to death since the formation is difficult to manage, but this handicap is more than compensated for by a massive, surging river of firepower that's generated from the center of an extended ship phalanx. With a fat number of ships extended outward, the size and caliber of the player's beam is truly a sight to behold. Without exaggerating, it makes other "regular" shooters seem woefully inadequate by comparison.

Although the title is short, there are several difficulty levels and a number of faux Achievements to earn as a way of providing replay, but it's pretty churlish to even vaguely suggest that the game doesn't deliver enough—considering that the entire project is available for (yes really) a single dollar, Mommy's Best Games and Shoot 1UP provide one hell of an enjoyable, innovative, and absurdly affordable ride. Rating: 8.0 out of 10.

Disclosures: This game was obtained via paid download and reviewed on the Xbox 360. Approximately 2 hours of play were devoted to the single-player mode, and the game was completed multiple times. No time was spent in multiplayer modes.

Parents: Aside from one boss being a busty female android that shoots lasers out of her breasts, there's nothing here to be concerned about. It's really nothing but spaceships blasting cartoony aliens with no blood or gore. Pretty harmless stuff.

Deaf & Hard of Hearing: You won't have any problems. There is no spoken dialogue in the game, and all the action is displayed quite clearly on-screen. There are no audio cues necessary to enjoy the action. Totally accessible.

This looks completely ridiculous. Thanks for bringing it to my attention!

Anyone who owns an XBox should grab this game. It’s great fun even if you’re no good at shmups, thanks to the easiest difficulty setting. The only hiccup, I felt, was that the aspect ratio of HD televisions isn’t great for a vertical shooter. It’s not a serious problem or anything, but there were a few points where the screen felt a bit too cramped. For this ridiculous price, though, there’s no reason not to grab the game and give it a try.