I usually have a couple of review games going at once, but it's rare that everything I've got on my plate is good at the same time. However, that's exactly the case right now. The stars may not align this way often, but I appreciate when they do.

First up, Skulls of the Shogun for Xbox Live Arcade (XBLA).

I've mentioned this one a few times over the last couple years (yes, years) but it's finally done, and almost ready for release. The fine folks over at 17-Bit studios were good enough to shoot me a code and the final version is a thing of beauty.

I think it's best described as a turn-based tactics game where the player takes control of an undead samurai general who’s unexpectedly been sent to the spirit world and isn't the least bit happy about it. In his bid to take the place over, he recruits horsemen, foot soldiers, archers and a few other things along the way.

While it may initially look like any other tactics game, don't be deceived. The developers have added a number of unique twists which make the game feel unlike any other tactics title I've played in recent memory. Since the game is not hex- or square-based, characters can freely roam the field of battle. However, when clustered together they form a "spirit wall" which prevents enemies from knocking them back or passing through. Even more interesting are the titular skulls themselves—when dropped by defeated enemies, they can be devoured to increase the health of a friendly unit. When that unit eats three, they transform into a demon and can attack twice per turn thereafter.

There are a number of other interesting ideas and tweaks, and the level of challenge commands respect. Although the graphics are pleasantly cartoony and the irreverent writing is worthy of laughs, it takes some real strategy to get past some of these mission. Just one wrong move can tip the entire balance of the battlefield and a win turns into a loss before you know it. It's been a while since I had to focus this much on a tactics title, and that's not a bad thing.

My wife and I playtested the game in an earlier form, and the difference in the final version was immediately noticeable. I thought it looked great back then, but it's straight-up better in every respect now. All parts of the game have received some love and attention, and there are plenty of perks that make the general experience more pleasant—things like being able to skip cut scenes, or speed up the AI’s turn.

Microsoft has kept this one under wraps for quite a while with the intention of unleashing it as one of their "big guns" for when the games side of Windows 8 was ready to go. That was definitely a smart move, because so far, Skulls has been worth the long wait.

Next in my queue is The Denpa Men: They Came By Wave for the Nintendo 3DS.

This is a title I had been looking at in the e-shop since the day I picked up my 3DS, but I just wasn't convinced to buy. It was cute enough and it seemed weird enough, but the demo didn't sway me and I left it on my wish list for later.

A short time afterwards, I saw @TheGayGamer talking about it on Twitter, so my interest level rose. He had almost completely talked me into a purchase, but there was still a little hesitancy on my part. As fate would have it, I heard @BrainyGamer talking about it on the Experience Points podcast the very next day, and that was enough to get me to take the plunge. If both of these guys thought it was worthwhile, then there must be something to it.

Denpa is a simplified dungeon-crawl RPG that asks the player with putting together a small army of tiny little men. However, one of the big folks is how you get them. In the beginning, the game asks the player to scan for local WiFi signals, and it interprets those signals into specific types of Denpa dudes.

For example, when scanning my home wireless, I get a number of characters with Antidote and Water spells. When I took it to work, I found characters with Ice, Poison, Heal, and so on. Later on, and option opens up that lets the player trade characters with other players via QR codes that are read through the 3DS camera.

This is all pretty novel stuff, but on top of this unconventional recruiting system, the game is actually pretty decent. The core of it is a basic JRPG battle system, but the player can use up to eight Denpa men at a time. There are a ton of different skills to build a team with, and customizing them with the appropriate gear for each dungeon is a nice little challenge.

Even better, the developers were geniuses when they instituted two different “everybody attack” functions—one using the magic spells, and one without. It cuts down on unnecessary button pressing, speeds up the entire experience, and the AI does a good job of choosing the right actions at the right times. It's still possible to micromanage if that's what's desired, but I appreciate that it's just as effective to use the auto-battle function.

Also, it's cute as hell. 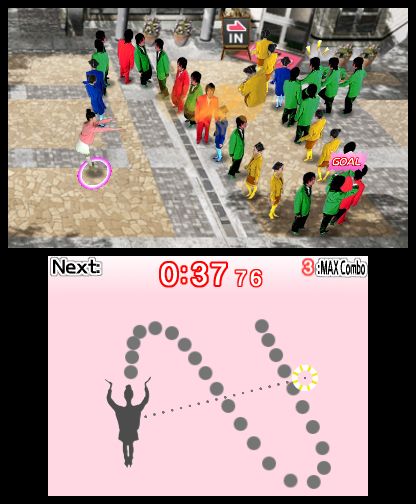 Last but not least, Tokyo Crash Mobs, also on 3DS.

As I've said several times, I love the weird, and they really don't come any weirder than this one. It's pretty much textbook Japanese game design insanity any way you look at it…

First of all, it uses real people as the game's characters and they also star in the FMV cutscenes.

Secondly, it's a puzzle game vaguely similar to something like Zuma or one of the eighty-four billion copycats like it. However, rather than shooting balls, the player is picking up people called “scenesters” and throwing or rolling them to make matches. Why are they matching these people? Well, the two stars of the game want to get to the head of a line, but it's not explained what they're lining up for, or why physically tossing someone into someone else makes a match. Nor does it explain where these people go afterwards…

I’m pretty sure you're not supposed to think about it too hard. There are all sorts of random elements like UFOs and ninjas that pop up, and if one of the characters loses around, they get shot out into space because… I don't know why.

Every single minute of it is pretty insane, but it's got a good energy and it's quite amusing to play, even if the controls are a hair less polished than I'd like. That said, you don't see something as whacked-out as this everyday, so I can't help but jump aboard.

I'm hoping the story has some sort of clever bit at the end, but even if it doesn't, the WTF factor is so high on this one that everybody should have it on their 3DS just to show friends at parties, if nothing else.