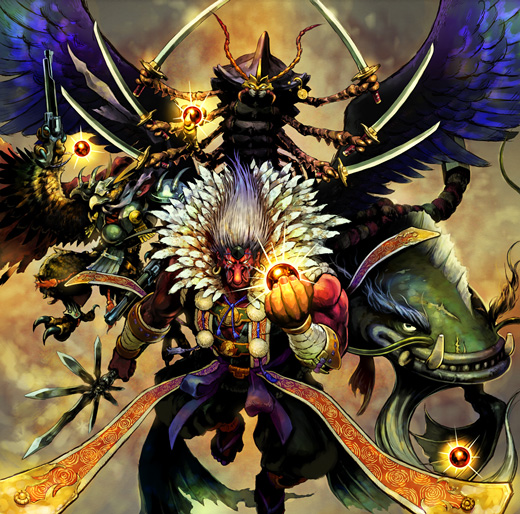 HIGH The fact that this game was even released in the United States.

LOW Unavoidable pop-up enemies that kill your equipment in one hit.

WTF Giving bosses immunity to most items and effects.

To the average player, does the term "Roguelike" bring to mind anything besides Han Solo or a lightly-armored female wielding a bow? Probably not, but Atlus USA is aiming to change that…

For those that aren't familiar, the Roguelike genre is populated by games featuring dungeon-crawling as their primary mechanic. The player starts at the top of a huge multi-level environment (sometimes the bottom, for variety) and then tries to reach the exit, floor by floor. Although there are many variations when it comes to specifics, most Roguelikes employ randomized level generation and item drops, forcing players to think on the fly and carefully manage what resources they're able to scavenge. They all tend to skew toward the insanely difficult side, and it's very common for a player to be stripped of all their experience points and inventory before being sent back to the beginning of the entire game if enemies get the better of them.

Although Roguelikes have strong appeal for players of a certain bent, it's safe to say that this heartless formula is probably too much to tolerate for the average gamer. However, Chunsoft's Shiren the Wanderer makes great strides to present the positives of this niche while mitigating the negatives just enough to make newcomers feel welcome. That's not to say it's easy, though—the first few hours are a cakewalk, but even experienced players will find stiff challenge in later stages.

In each dungeon, Shiren will find an assortment of shields, swords, magic spells, food and healing items, and a few other odd things along the way. With only 30 inventory slots total, players will have to prioritize the different resources they find. Is it more important to have a backup shield, or is that last slot better used holding a Sleep spell? Is having five healing herbs too many, or can some of them be discarded to make room for a Lightning Scroll? Although there are ways around this limit, it's always important to plan what to keep since there's no way to predict what's available. (The game's shops feature random inventory as well.)

Having to make do with what's on hand forces players to think carefully, a facet reinforced by the turn-based nature of play. Every action Shiren performs uses up one turn, after which every monster in the dungeon gets a turn of their own. If the player does nothing, then everything remains in stasis until the player makes a choice. This system prevents the game from becoming a button-masher, but also requires that players think at least a few steps in advance. Would it be better to shoot an arrow and hope that an incoming reaper will die before it comes in striking range, or are there enough turns to reach a nearby exit? It's a bit chess-like in a way, with a good deal of improv thrown in.

While counting turns and keeping a close eye on items feels much like it does in other Roguelikes, the concessions towards newcomers mentioned earlier are quite a departure from the norm. 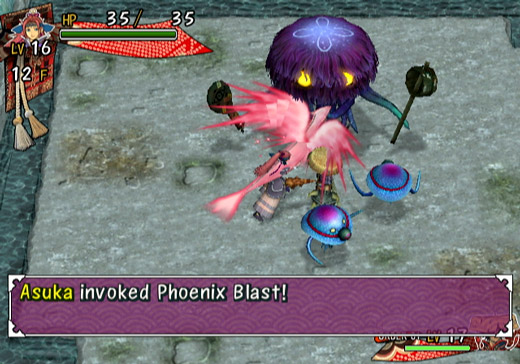 For starters, Shiren is almost always accompanied by a helper character. Having this second sword along makes combat much more manageable (though it's not without its downsides.) Also tweaked is the game's world, now broken up into small sections. Each part being explored by the player can usually be accessed directly and at-will once unlocked, saving the player from too much backtracking. Most importantly, Wanderer has made an enormous change by allowing players to keep their experience (on Normal) or experience and inventory (on Easy.) That is a mind-boggling shift all on its own, and when combined with the other factors, these choices mean that Shiren the Wanderer is significantly less difficult than most of its compatriots. Players craving true challenge might grumble a bit, but the fact is that it's hard to build a fan base when potential devotees are mercilessly crushed before developing an addiction.

On the other hand, having played through Mystery Dungeon: Shiren the Wanderer on DS, I can't help but feel that certain aspects of this revamped Wii sequel aren't quite up to snuff. Graphically speaking, the visuals are crude and lacking in detail. They get the job done, but don't expect any bells and whistles… in fact, I often found myself mourning the loss of Shiren's emotive 2D sprites when faced with this low-gloss, low-polygon presentation.

It was also somewhat annoying to find that the map function wasn't well thought-out. Without the handy upper screen of the DS, players must choose between having the map of each floor constantly displayed in the middle of the screen on top of the action, or having it visible only by pressing the start button. Playing Shiren means looking at the map is a near-constant activity, so neither of these answers was satisfactory. I couldn't fathom why the developers didn't simply put a portion of the map in a corner of the screen like practically every other game does.

The graphics and the map were disappointments, but I was most concerned by Chunsoft's choice to grant status immunity to most of the game's bosses.

In Shiren's DS outing, I was incredibly impressed by the way the rules of combat applied equally to player and enemies alike. If a creature could inflict a negative status on Shiren, then Shiren could inflict it right back. In fact, I completed the DS game by casting a simple low-level spell during the final encounter and won with a single swipe of my blade. This universal rules enforcement was a revelation after years of playing against typical JRPG enemies immune to Sleep, Confuse, and so on, so it was something of a blow to see this system cast aside. Important battles now hinge more on traditional attacking and healing than clever manipulation of the items from the dungeons, making them far less useful and important. I can't help but feel that choice was a mistake, stripping away some of the complexity and integrity that made it stand out.

Regardless of the things that I found unsatisfactory, I'm quite glad that Atlus took a big risk in bringing Shiren the Wanderer to our shores. I'm also glad that Chunsoft took a risk of their own by shaking up the formula, despite the end result not quite clicking on all cylinders. Roguelikes are quite possibly the genre American players see the least of, so getting another one is always a treat. Any steps taken towards helping endear this tiny niche to the game audience at large and potentially opening the door to future entries in the genre can only be seen as a good thing. Rating: 7.0 out of 10.

Disclosures: This game was obtained via publisher and reviewed on the Wii. Approximately 20 hours of play were devoted to the single-player mode, and the game was not completed. There are no multiplayer modes.

Parents: According to the ESRB, this game contains alcohol reference, mild fantasy violence, mild language, and mild suggestive themes. Although these disclaimers seem to be a bit concerning, I'm actually stunned that this game isn't rated E. The graphics are bright and cartoony, and the violence is nothing more than swinging a sword or shooting an arrow and having an enemy go out in a puff of smoke. The "suggestive themes" are so tame and oblique that they're not even worth mentioning, and I honestly can't remember any instances of language. I would feel quite comfortable letting my children play this game, and I see no reason why parents should be cautious of it.

Deaf & Hard of Hearing: You won't have any problems. All dialogue is presented via text, and the turn-based nature of play means that everything is deliberate and methodical. There are no auditory cues needed during play, and all pertinent information is displayed on-screen. I found no auditory barriers whatsoever.

Shiren has a ferret companion.

Though, I would prefer to think that ferrets wearing a sweatshirt are just related to everything Amazon has for sale. Buy 3 used rpgs, and we’ll throw in a ferret.

I would love to know why a picture of a ferret wearing a sweatshirt is in the Amazon related links thingy.