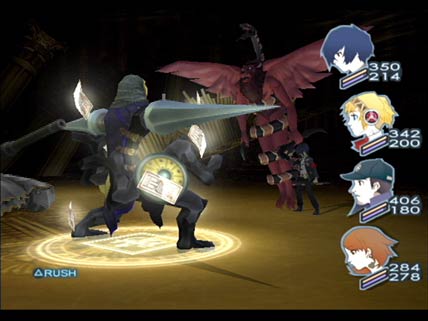 As a reviewer who thinks most RPGs are too long these days, I was a little surprised to find that I sank close to 100 hours into Persona 3, and felt like nearly every minute of it was worthwhile and interesting. Don't get me wrong-I've always had great respect for the Persona series. In fact, Persona 2 ranks as one of the greatest RPGs in the history of the genre for me, and I had a hard time imagining how such an incredible title could be followed. Amazingly enough, not only did Atlus manage to create a worthy successor, it's established a new milestone in the genre.

Examining the nuts and bolts, the biggest thing I see as an improvement to Persona is the selectable difficulty level. "Easy" mode is a godsend for a series that's renowned for being brutally heartless to players, requiring an almost fanatical diligence to be able to complete some of the older titles. Taking the blood-thirst out of the enemies in battle has brought things down to a more manageable level of challenge, and the self-esteem destroying, game-quitting beatdowns handed out by bosses are minimized. I've always felt that Persona and Shin Megami Tensei would enjoy a much larger fan base if the games were just a bit more welcoming, and that problem has now been addressed.

Another major issue that's always plagued Atlus games has been that they usually required players to spend an inordinate amount of time grinding through battles to level up and accumulate skills that were necessary to make progress. It was especially bad since it was easy to pick the wrong character or the wrong magic-using Persona, spend hours gaining levels, and then realize too late that all the effort was wasted and must be repeated. The new Social Link system completely eradicates this problem while retaining the elegance and sophistication of the Persona system-without overstating the case, it's a stroke of sheer genius.

By spending time to get to know the characters populating Gekkoukan High and the surrounding city, the Social Link for each category of Persona grows. For example, hang out with Chihiro the class treasurer, and your rating for Justice type Personae will grow. Eat some grub with Nozomi, and your Moon ranking will be upped. What this means is that when it's time to create a Persona for use in battle, if its type matches a Social Link that you've cultivated, it will automatically level up to an equivalent degree. It's hard to express what an incredible time-saving shortcut this is, but by reducing grunt work and encouraging players to explore the game's sidestories at the same time, it's impossible not to be in awe of this masterful synergy.

Besides these two huge advances, there are dozens of small tweaks and improvements that make the overall experience smooth, polished, and pleasurable- most notable is data management. When playing older Atlus games, I would literally have to keep a pen and paper beside me to keep track of spell names and demon weaknesses. The sheer amount of information contained in these games is mind-boggling, and it was always a bear to try and manage. Thankfully, the developers have seen fit to give players easy access to this info at will, eliminating the need for a laptop and spreadsheets beside the PlayStation 2.

Although I spent most of my time with Persona 3, Atlus has released a newer, revamped version called Persona 3: FES. This updated iteration has smoothed trouble spots and added elements to a game I already thought was fantastic. Among other things, the social calendars which frequently conflicted and sometimes left players with nothing to do on a Saturday night have been rescheduled, an all-new weapon fusion system and thirty more Personae have been added, and a Social Link that was conspicuously absent in the original version is now present. That content in and of itself means that the rerelease is the definitive version to play, but there's one more thing added to FES that players of either version will want to see-The Answer.

A substantial "second quest" which takes place after the ending of Persona 3, The Answer provides another twenty to thirty hours of play on top of the original's 70-plus. Although it's much smaller in scope than the main game and focuses mostly on combat in a new dungeon, the additional story scenes truly do add to what was previously established, and the revelation at The Answer's end is guaranteed to satisfy anyone who felt that Persona 3's final moments weren't all they could be. It's extremely rare that I feel an extra quest or add-on is worth the time (especially when talking about RPGs) but I would honestly say that The Answer is required playing for anyone who enjoyed their time with the first part of Persona 3. I could go on, but there's really no point-Shin Megami Tensei: Persona 3 is a fantastic game, any way you slice it. The mechanics are ingenious and fresh, the characters are well-written and engaging, the voice work and music are top-quality, the art is beautifully stylish, and by couching it all in a real-world setting far from any of the standard fantasy clichés, it establishes an identity and qualities uniquely its own. A true gamer's game, Atlus has absolutely outdone themselves and once again proved that they are at the leading edge of RPGs. Rating: 9 out of 10

Shin Megami Tensei Online has gone through a rather tumultuous development period. As the first Megaten title in MMORPGs form, there was a certain amount of anxiety attached to it. Early news on the title was scarce. It was believed that the game somehow grew out of the original online plans for Shin Megami Tensei Nine (a Japanese Xbox exclusive title) that were later dropped. Whether or not this was true, the game initially creeped up for the PC quite a while back in 2004. At some point in this stage of development, the game was in some sort of… Read more »