More than a mouthful 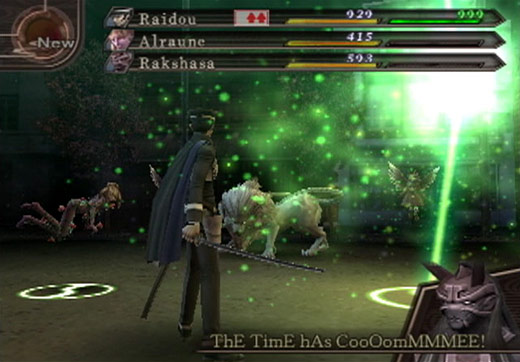 HIGH Retains all the classic SMT elements dripping with style and polish.

LOW No voice acting for the dialogue.

WTF Why is the encounter rate set so high?

Single-handedly keeping the PlayStation 2 alive as a viable gaming platform, niche publisher extraordinaire Atlus has done it again and brought one more must-play title to the states. Clear off the coffee table and put away those stacks of DVDs—last generation's hardware still needs a place in the living room.

Revisiting Japan's 1930's pre-industrial Taisho era, Devil Summoner 2 tells the continuing story of the enigmatic Raidou Kuzunoha. The 14th in a long line of venerable summoners, Raidou returns to the Narumi detective agency after whispers of evildoing in the capital surface. Soon after resuming his peacekeeping duties, a seemingly-average missing person case sets "lucky" events in motion, and the adventure begins. Of course, it goes without saying that the game's scope encompasses far more than a simple disappearance, but I won't spoil things here.

Unlike the other entries under the Shin Megami Tensei role-playing umbrella, Devil Summoner features real-time combat. With Kuzunoha wielding a sharp sword and a sidearm, the game's fights take place on a single screen after a random battle is triggered. However, instead of going into battle alone, Raidou is accompanied by demons he recruits from the shadowy side of this alternate Japan.

Rather than the usual never-ending cycle of uninspired RPG equipment upgrades, the elegance of Devil Summoner's combat comes from the demons themselves.  Bringing the proper "teammates" into battle is a key strategy to winning, since taking advantage of enemies' elemental "weak" points is quite necessary. In this title, fighting fire with fire is not a valid strategy, so having a wide variety of demons with different affinities on hand is of the utmost importance. Use Jack Frost against a fire demon, or a monster with Zan against one susceptible to it. Vaguely like a darker, more serious sort of Pokémon, the urge to "catch 'em all" must be heeded in order to advance through the game. 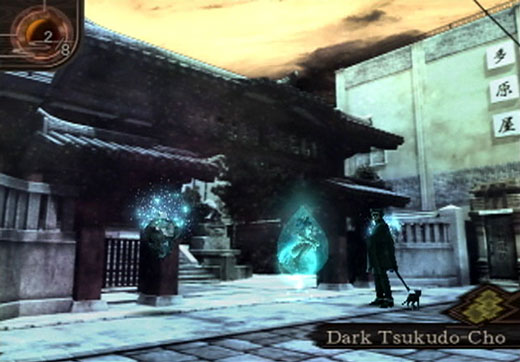 Similar to the way the outstandingly superb Persona 4 was built squarely on the framework of Persona 3, it comes as no surprise that Devil Summoner 2 is quite similar to the its first game in many respects, even going so far as to directly carry over several assets like certain locations or even the demons themselves. However, this is not a bad thing. I'm certainly a believer in the phrase "if it ain't broke, don't fix it," and that certainly applies here; I thought the first game was a clear winner, and this sequel is only improved.

Having paid close attention to the requests of its fans, the developers at Atlus have implemented several tweaks to make the game even smoother and more playable than it was. For example, it's now possible to add, combine, or generally manage demons at any save point rather than insisting on the massive inconvenience of having to return to home base. Similarly, all pertinent info about demons and their abilities is now available at a glance, meaning there's no longer a need to keep a notepad and pen beside my controller to keep track of things. (I couldn't be happier!)

Really, the only complaint I have about the game in total is that the encounter rate of random battles is frighteningly high. In certain sections, it felt as though I was taking no more than two or three steps between fights, and that's just too much. To be fair, there are no fights at all when Raidou is in towns or talking with people during the daytime investigation sequences so it sort of balances out, but still… let's ease back on the amount of unavoidable combat next time, shall we?

That small matter aside, Atlus once again proves that they are the publisher who takes care of their fans—Shin Megami Tensei: Devil Summoner 2 – Raidou Kuzunoha vs. King Abaddon is another more addition to a long string of superior RPGs, and a solid reason to stay in the last generation just a little bit longer. Rating: 8.5 out of 10.

Disclosures: This game was obtained via retail store and reviewed on the PlayStation 2. Approximately 28 hours of play were devoted to the single-player mode, and the game was not completed at the time of review. There are no multiplayer modes.

Parents: According to the ESRB, this game contains Blood, Sexual Themes, and Violence. Moms and dads should be aware that the game's "M" rating is appropriate, but also that it's simply par for the Shin Megami Tensei course as all the installments in this series are aimed squarely at older players.  Not only is the subject matter only appropriate for teen players and older, the difficulty of managing this RPG will be above most children. In form and content, this is not stuff for kids.

Deaf & Hard of Hearing: You won't have any problems. There's no voice acting or speech in the game, and there aren't any useful or necessary audio cues during gameplay. Everything here is totally accessible.