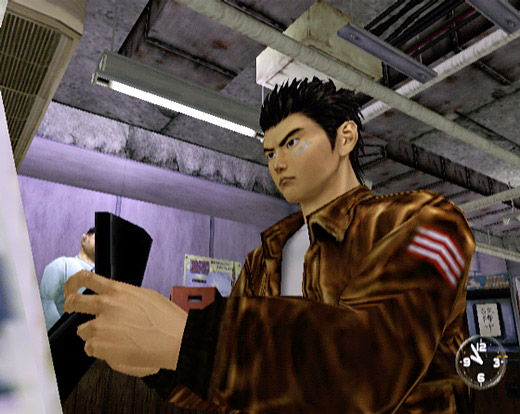 Sega seems to have a theme going lately consisting of games which are extremely original and challenging on many levels, yet strangely, they aren't very much fun to play. Seaman was the first game in the recent trend, and Shenmue is definitely another. When I review a game, my main concern is whether or not it's fun. If you're the type of gamer who enjoys entrenching themselves deeply into the minutiae of a game for the sheer sake of experiencing immersion, the answer would be "yes." Sadly, for myself (and I would be willing to bet the majority of gamers out there), the answer here is "no."

Before going on, I'd like to point out that Shenmue is if nothing else, beautiful. The graphics are simply stunning in places, and the amount of detail bestowed on certain areas must have been a backbreaking and excruciating amount of work. However, despite the stellar quality of some of the graphics, it doesn't really add anything besides ambience and mood. If you take a hard look at what you actually do in the game and don't get overwhelmed by the visual opulence, it's all a pretty boring, linear experience saved only by the novelty and eye-popping quality of the thing.

When I play games of this sort I like to have objectives, stay hooked on the story and keep things going at a progressive pace. I definitely agree with Chi in saying that a lot of the sidequests (if you can call them that) don't really go with the flow of the game. Let's face it, if you had just seen your own father murdered in front of your own eyes, it doesn't make a lot of sense that you'd waste time on all the little bits of distraction the game offers up. All the tangents available such as collecting toys from little plastic eggs, playing Space Harrier or watching the kitten starve severely dull the intensity of the overall plot.

The biggest example of the type of misguided design structure here is also one of the biggest draw points to Shenmue. The game has re-created a small Asian township and surrounding areas, complete with locals who have their own "lives" and routines. While this sounds interesting at first, I found it to be indicative of the entire Shenmue experience—deep, yet shallow at the same time with nothing really significant to be gained by it. It simply exists. You have the option to watch each person go about their individual daily business, but was the effort of creating individual routines worth it? Not in my opinion. I found myself simply ignoring all the extraneous eye candy and trying to keep on track by unfolding the story while keeping the rubbernecking to a minimum. Perhaps I'm not the type of gamer Shenmue was intended for, but does standing around somewhere and examining all the pamphlets on a rack or following a person from their home to their job and back home sound like fun in real life? Not to me, and it's not very much fun in the game, either. The same thing goes for the bus example Chi mentioned. I don't like standing around and waiting for buses on a sidewalk, so why would Sega think that it was fun electronically? 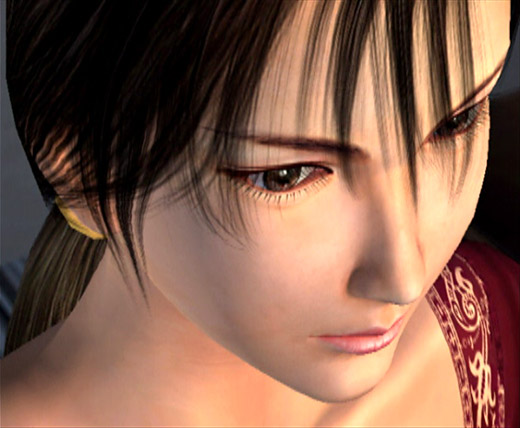 Besides the bus, there are many points in the game where you have nothing to do but simply wait for a specific time to do something. I play games to alleviate the boredom real life brings, not to wallow in it. I often found myself wishing I could advance the game's clock to simply get on with playing the game since your options are so limited. Trying to talk to people or do something that's not related to your next task gets you nowhere, and the only other thing to do to pass time are partake in the tangents I mentioned earlier. I can't say that I often read a book during a game to pass the time, but I can say it here.

As far as freedom in the town, and the game in general goes, it was frustrating how much it appeared you could do only to discover that the entire affair is actually highly linear and restrictive with a very deceptive veneer. For example, when trying to talk to the multitude of townsfolk and people in the game, you can never choose what you want to say, and the majority of repetitious lines Ryu comes up with directly relate to him meeting his next objective. I don't see the worth of creating an entire town if you're still on the same type of linear event track that has existed as long as RPGs have. Talk to Person A which leads you to Person B, that person leads you to Person C (and D and E) which leads you to your objective. This track is repeated numerous times, yet you never have the opportunity to deviate from it, let alone talk about anything else or to even go one step deeper in the conversations. I don't see the logic in creating so much substance only to be unable to really do anything with it.

On a similar note, one thing I found particularly irritating was the relationship you are supposed to have with your alleged girlfriend, Nozomi. While the very beginning of the game puts out a sentence or two along the lines of "Ryu and Nozomi have been close friends since childhood," there aren't any scenes which establish this. I had initially tried to further that particular plotline by calling Nozomi and trying to start a few conversations and see where the game led me, only to be met with the same two or three stock responses each time. Feeling that this was going nowhere, I promptly dropped any efforts to elaborate on the relationship and the game didn't present me with anything outside of a brief interaction once or twice throughout the first two discs. After continuing to try and solve my father's murder, towards the end of the game Nozomi announces something that I would assume is supposed to have significant emotional impact, only to have it fall completely limp due to the fact that I felt no connection with her whatsoever. I feel this happened because the game was too restrictive initially when I had tried to elaborate on the relationship, and then because I stopped trying to delve into it and simply waited for events to unfold, I had missed out on triggering things which might have fleshed out the bond. I would have preferred that creator Yu Suzuki pick one method of storytelling or the other, not waffle between pre-scripted and nonlinear. 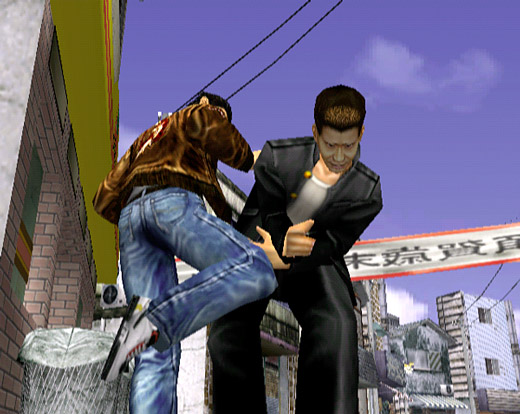 This lack of focus in the game is felt in nearly every aspect. It seemed like overall the team was trying to take the game into several possible directions at once while not really succeeding at any of them, and Chi's example of the free battle system is accurate. While the game encourages you to practice your martial arts, every single free battle except for the hellishly difficult final one can be won by simply mashing buttons. What's the point of learning exotic techniques when punch, punch, punch gets results? Conversely, while I found the QTEs in the game to be surprisingly pleasant (quite ironic considering many early critics negatively labeled the game as nothing more than a high-tech Dragon's Lair), the balance of QTEs and free battles shifts dramatically once you're in the home stretch, and I can't say that I found it very enjoyable to go from an occasional battle and some QTEs to a string of free battles on disc three. Once again, in this case I felt that Suzuki's team should have picked one direction and emphasized it throughout the game rather than changing horses midstream.

There are a few high points to be had with Shenmue, but more often than not I found myself pushing through parts which were supposed to be fun, yet turned out to be more tedious than anything. While the idea of a "real-life simulator" may appeal to some, I have a real life, and it suits me just fine. I prefer the less realistic yet more entertaining structure video games generally offer when I sit down and fire up a console. At its heart, Shenmue is a good story burdened by a structure which reinforces partaking of the "world" Yu Suzuki has created. Doing things for the sake of doing them simply doesn't strike a chord with me at all, and this lack of flow and tension hurts a game which by all rights should have rocked the current generation with the amount of innovation alone.

The production values are incredibly high, and there is no shortage of interesting ideas or creative thinking, yet the thing just doesn't come together as a whole, and it certainly isn't very much fun. While perusing the newsgroups, I came across a statement from a sharp gamer that perfectly sums up the essence of Shenmue: "It's a game that everyone can respect, but not everyone can enjoy." Rating: 5.5 out of 10.