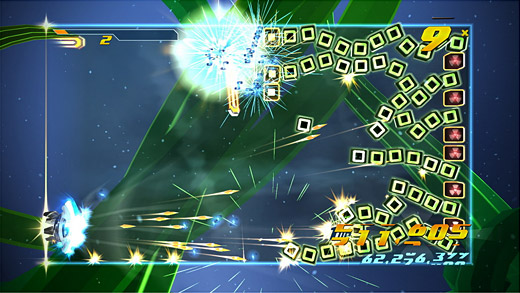 LOW Nothing… it's all good.

WTF Where can I buy this soundtrack?

Remember Breakout? If not that, then surely Arkanoid or one of the million other clones where the player controls a platform that moves from side to side and destroys stacks of bricks with a bouncing ball. It's one of the oldest formulas in gaming, and you can find one version or another on every console since the Atari 2600. If you had asked me a few days ago if I'd be interested in playing another one of these, I'd have said no… until I tried Shatter, that is. Developed by Sidhe Interactive, Shatter does what I thought was basically impossible; it takes the well-worn and tired "brick-breaking" concept and makes it feel interesting and fresh again.

Although first impressions might lead a player into thinking this is just another prettied-up rehash, that couldn't be further from the truth. There's certainly still a paddle of sorts and a ball still gets shuttled back and forth to eliminate bricks, but the elements of gameplay become more layered and complex with each level. By adding significantly new ideas and content tweaks, Shatter is on an entirely different level than the source material.

For example, the player can either "suck" or "blow" at will, influencing the direction of the ball and giving a certain degree of control over the board. The usual power ups are present, but more significant are the different types of bricks. Not content to feature the same inert rows waiting to be eliminated, some bricks exert gravity forces of their own, causing the ball to travel in unpredictable directions. Others explode, and still others fall towards the player thanks to gravity and physics. Although initially subtle, these ideas progressively develop and give Shatter a degree of sophistication totally lacking in other games of this type.

Going further, the developers have included actual offense and defense capabilities for the platform itself, not to mention a series of cleverly-designed bosses at the end of each world. It's still the same core concept pioneered so long ago, but feels entirely more exciting, substantial and engaging than it has in years.

I could mention the razor-sharp graphics, cleanly minimalist design and absolutely phenomenal soundtrack, but there's really no point… Shatter is easily one of the best offerings available on the PSNetwork even without taking any of those things into account. Far more than simply shuttling a paddle left and right, Shatter is a complete, richly engineered game well-deserving of any PlayStation 3 owner's attention. Rating: 8.0 out of 10.

Disclosures: This game was obtained via publisher and reviewed on the PS3. Approximately four hours of play were devoted to the single-player mode, and the game was completed one time. There are no multiplayer modes.

Parents: According to the ESRB, this game contains mild fantasy violence. Seriously, ESRB? Seriously? It's an abstract metallic paddle bouncing a yellow ball against colored bricks and the occasional mechanical boss contraption. Exactly where is the violence? Parents, have no fear… this game's got absolutely nothing harmful to the little ones. It's totally safe, and I would have no qualms about letting my own sons play this.

Deaf & Hard of Hearing: You won't have any problems. There's no dialogue at all in the game, and no audio cues necessary for gameplay. It's totally accessible.

This is only to do with standard music pricing, eg most digital releases cost around $10 it seems silly that people made a fuss over it. no one would complain if the game was $10 which seems even more silly. Sidhe decided that $7.99 USD was good price for the PSN
and released the soundtrack independently at standard international digital music prices.

There’s been some controversy over the fact that Jeramiah Ross/Module’s soundtrack costs more than the actual game (the minimum price for the OST is $9,99). Given that the album is definitely worth ten bucks (not only is it very good, there’s also over an hour’s worth of music in it), I would rather look at it the other way around and say that the game is underpriced in comparison with the soundtrack.

And, for the record, I happily payed an extra $4 for the OST just because I liked it so much…

Glad to hear you enjoyed Shatter! The soundtrack is available through http://sidhe.bandcamp.com/