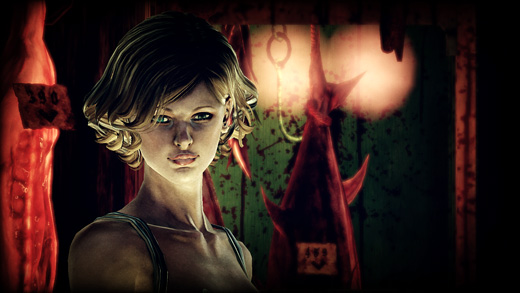 I don't do Facebook, but I know a lot of you do. If that's the case and you're a journo/writer/reviewer/blogger/developer here in the Pacific Northwest, you might want to check out the PNWJournos.com Facebook page.

I've just turned in a main review for Toy Soldiers: Cold War and a third (yes, third) opinion on Knights Contract over at GameCritics. Look for those soon. In the meantime, I just started Shadows of the Damned (360) and put an hour or two into it. Surprisingly, I don't have much to say about it so far.

At this point (Area 2-3) I don't feel much of a connection with main character Garcia Hotspur although he's all right, and the gameplay seems a lot like recent Resident Evil streamlined and sped up. The game's use of special "darkness" to introduce the danger zones is kind of interesting, although it's also kind of annoying… without it, the game would be one long string of hallways with only enemies to break it up so I appreciate what the developers are trying to do. On the other hand, it's… just kind of annoying.

In terms of writing and story, I'm too early to really say. I've never been a big Suda 51 fan to start with, so I'm taking this as it comes. It hasn't really grabbed me yet, but I haven't been bored or disaffected enough to consider quitting. Yet.

I had never heard of it before this evening, but click on over to this blog and check out the trailer for Owlboy. That's a pretty sweet old-school vibe they be kickin' over there, and apparently the game will be hitting PC and XBLA sometime this year.

I sure hope that the developers start reaching out to the press and journalists soon, because I feel like I do a heck of a lot of work trying to keep up with the games that are coming out and to be perfectly honest, I had no idea this game existed. Props to @LaurenIsSoMosh for tipping me off to it.

It's been a really long time since I've blogged about recreational reading, and the reason for that is probably because… I haven't been doing any.

Free time is definitely at a premium these days, but since I've been on a bit of an extended break from Monster Hunter, I've been bringing along a few paperbacks and trying to do the literary thing. I went through at least ten or twelve books that I started and didn't finish because they were either horrible or boring, but I found two that really caught my attention.

The first is Enclave, by my good friend and Nicest Author In The World ™, @MsAnnAguirre. I haven't finished reading this one yet, so I don't want to say too much at the moment. Still, if you're in the market for a post-apocalyptic young-adult story about a young girl and a whole bunch of mutants, this is going to be your go-to.

The other is Unholy Ghosts by @StaciaKane. This one is about a drug-addicted "debunker" who investigates hauntings and banishes ghosts in a world where religion has been cast aside in favor of a new church that deals with spirits living (literally) underground.

Both of these novels are great, but the problem is that they're both so good that I keep going back and forth between them without having gotten to the end of either one yet. I suppose that's a fine problem to have, though… up until I started them, I was beginning to wonder whether I was ever going to find a book that could hold my interest again. Thankfully, these two have restored my faith in curling up on a couch with the printed page, a lamp, a cup of tea, and my wife beside me.