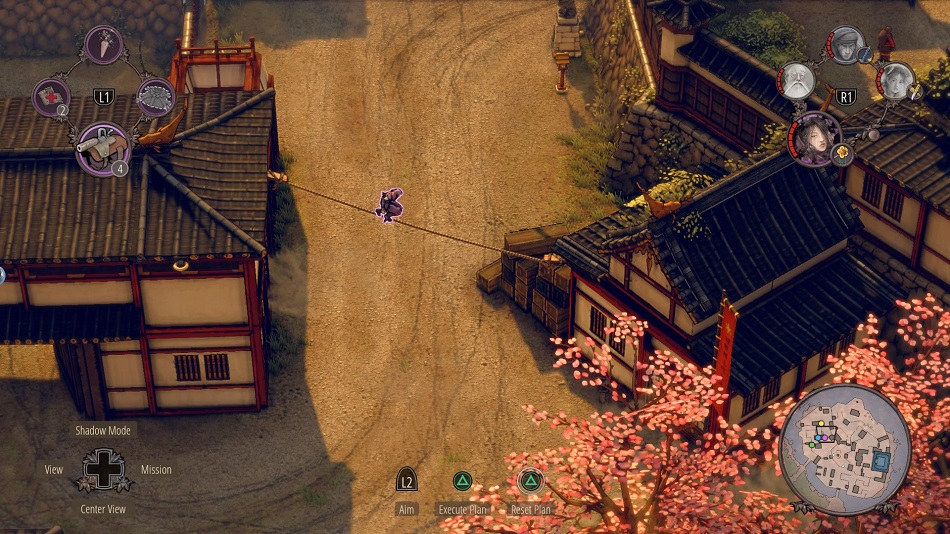 LOW Getting hung up on small objects on the ground.

As someone who spends a lot of time thinking about games in a critical sense, I’ve lost count of how many ‘if’s have held something back from its full potential. If this had a better same system, it would’ve been more playable. If the story had made a few changes, it would’ve been engaging. If the difficulty curve had been smoothed out… The list goes on and on. Games tripped up by ifs are common, but titles that honestly and thoroughly address all their ifs are exceedingly rare.

Shadow Tactics: Blades of the Shogun is one of the rare ones. Every problem that might have been an issue has been predicted and prevented (or caught and fixed) by the developers, resulting in a finely-polished, finely-tuned standout experience. In a year full of good games, this is a great one.

Shadow Tactics is a real-time strategy seen from an overhead isometric perspective. The player will be ultimately in charge of a team of five warriors, each with a predefined personality and skill set. Each level in the game is a massive, sprawling affair set in feudal Japan and filled with houses, towers, castles, and, of course, plenty of enemies. Some hostile troops are stationed at specific places to keep watch, while others have predetermined patrol routes. It’s up to the player to study their surroundings and figure out a way to accomplish varied objectives based on the current situation and what’s in their skill set.

While this description might make Shadow Tactics sound like any of a dozen other titles, there’s so much love and attention poured into every aspect of the experience that it’s impossible not to recognize it as a superior product. For example, the introductory level (doubling as the tutorial) moves at a slow pace while teaching all the necessary elements of the characters, their abilities, appropriate strategies and other basics, but at the same time wastes no opportunity to firmly establish the story and characters.

In my experience, most strategy games don’t do much with plot beyond giving the player a basic premise, but Shadow Tactics goes beyond the typical ‘warring political states’ and tells a tale that’s not only sensible and easy to follow, but creates memorable characters that connect immediately. Thanks to the elegant writing, a great deal is conveyed with relatively little, and I had genuine feelings for the whole crew. From standoffish ninja Hayato, elderly sniper Takuma, thief girl Yuki, fatherly samurai Mugen and sly infiltrator Aiko, I loved their dialogue, and how they breathed life into the adventure. Whether commiserating about the tasks ahead or simply commenting on life, spending time with this team was an absolute treat. 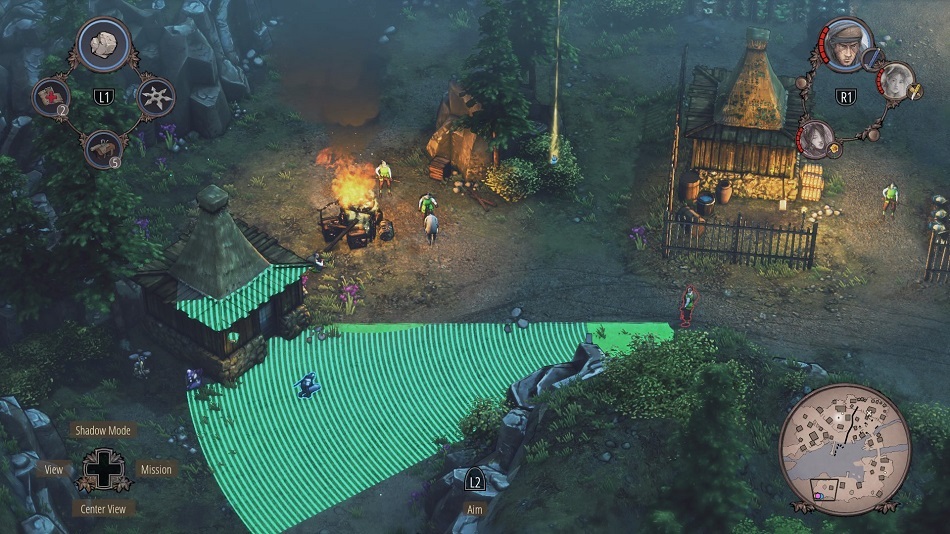 The gameplay get as much love and attention as the story and characters. Each area is incredibly detailed, offering multiple paths towards victory. Cautious players can sneak along rooftops and hide in shadows with minimal confrontation, while bold players can kill every soldier in an encampment. There’s no one correct answer, which is fantastic.

In addition to the freedom in approaching each scenario, I also loved that the developers had story events affect team composition – some characters aren’t available at certain times, and it keeps things fresh. Instead of constantly relying on Mugen’s brutal forward assaults or Yuki’s birdcalls to lure guards into quiet corners, the player is asked to make do with who’s around. Something easily solved with one teammate becomes a new challenge with another, and vice versa. It’s wonderful.

Getting back to the ifs, the devs avoided a big one by letting the player save at any time with no limits. Thanks to this, the willingness to experiment comes without any penalty or fear of losing progress. Because some of the challenges can be quite difficult (especially towards the end of the campaign!) Shadow Tactics becomes infinitely more enjoyable thanks to this ability. While some hardcores might decry the generous saves, it was absolutely the right call.

Other aspects are just as smart. Enemy types on large maps are easily distinguishable from each other, as are the members of the team. It’s easy to see the sightlines of enemies when trying to stay out of view, and one of the best features is “shadow mode” – with it, the player can pre-program actions to be executed by multiple characters at the same time for situations when one ninja is simply not enough. It is truly a thing of beauty to plan an intricate set of attacks, push a single button, and have the entire team spring from the shadows and down a whole squad without any alarms going up. Fantastic stuff.

Some may see me as a critic who’s hard to please, and if that’s true then take it as a sign of this game’s quality when I say that the only issues I have with it are so minor as to be almost unworthy of mention —  things like the character portraits being surprisingly ugly, or certain minor environmental objects being a barrier when they shouldn’t be. After all, a nimble kunoichi should have no problem stepping over a small rock jutting out from a corner. There’s also an argument to be made that the AI should be more responsive when a sloppy ninja leaves bodies lying about and nobody seems too bothered after the initial surprise. Ultimately, these things are of no consequence when taken in the context of how much Shadow Tactics gets right — and it gets so much right.

It’s not hyperbole when I say that by recognizing all of its ifs and thoroughly ironing them out, Shadow Tactics: Blades of the Shogun is one of the best tactics title I’ve ever played, and it’s certainly one of the finest games I’ve played this year. As a masterpiece in nearly every respect, I salute Mimimi Productions and eagerly look forward to their next work. Rating: 9.5 out of 10

Disclosures: This game is developed by Mimimi Productions and published by Daedalic. It is currently available on PS4, XBO and PC. This copy of the game was obtained via publisher and reviewed on the PS4. Approximately 50 hours of play were devoted to the single-player mode, and the game was completed. There are no multiplayer modes.

Parents: According to the ESRB, this game is rated M and contains Blood and Gore and Violence. Their summary says this is a stealth action game in which players control a band of ninja and samurai heroes in Edo-era Japan. From a 3/4-overhead perspective, players infiltrate enemy strongholds and villages to complete mission objectives, including killing human targets. Players use swords, shurikens, and explosives to kill enemies. Blood is frequently depicted as enemies are slashed and stabbed. A handful of sequences depict characters committing seppuku (ritual suicide) and getting beheaded; large blood-splatter effects and pools of blood are depicted near severed heads and corpses.

Deaf & Hard of Hearing Gamers: All pertinent dialogue in missions and cutscenes is subtitled, but ambient dialogue is not. Although lines are being spoken, it only displays as “…” However, none of this text is relevant to play (it’s only flavor) and there are no audio cues necessary for successful gameplay.