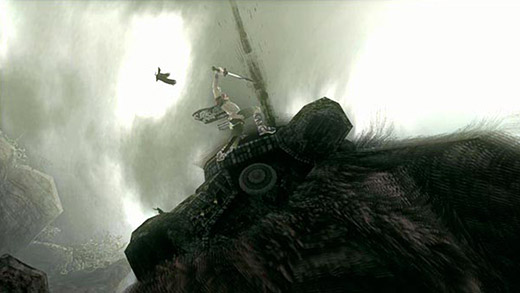 Videogames that aim to be more than just videogames are few and far between. The vast majority of titles out there aim to sell a million copies, and if they happen to have a message or morals thrown in, well that's just accidental icing on the cake. I suppose it's just easier to focus on entertaining mechanics and mass-market appeal than it is to somehow reach people through basic human feelings, expression and emotion—not to mention the requirement that it also be interactive and enagaging, and not just a passive, controlled experience like books or films.

Most games that manage to strike a chord with the heart do so briefly with one or two scenes, or a cinematic ending. Titles that strive to touch throughout the entire experience are the rarest of the rare. In my mind, the most notable title to ever achieve this extended emotive quality was the outstanding ICO. It comes as little surprise then that another game attempting to craft a similar grail would come from the same creators.

Like Dan, I was struck by the raw sincerity of the effort. The overwhelming visual communication of the graphics and artistic direction are impossible not to notice. Using muted shades of brown and grey, a somber tone in the eye and in the heart develop almost immediately. Such strong art direction reinforces the meditative quality that searching out foes throughout the vast land in Colossus generates.

Riding through the hills, deserts, and misty forests serves to both emphasize the significance of combat, and the very distance that must be traveled mirrors its scope. Without a doubt, each battle is an event and the feeling of besting an insurmountable force is significant. In the areas of atmosphere and spectacular awe, Colossus reigns supreme.

However, in contrast to Dan, I felt that in making so many bold design and structural choices, not all of them were successful. As much as I'd like to, I can't award the highest score.

It may sound strange, but the thing that was most detrimental to my experience was that the developers chose to break the game up into 16 parts. By being warped back to a central location and getting unnecessary hints from a disembodied voice, my feelings of solitude and immersion in the vast landscape were shattered time and time again. It may seem like a small thing to some, but more permanence and continuity would have magnified the scale of the hero's adventure. 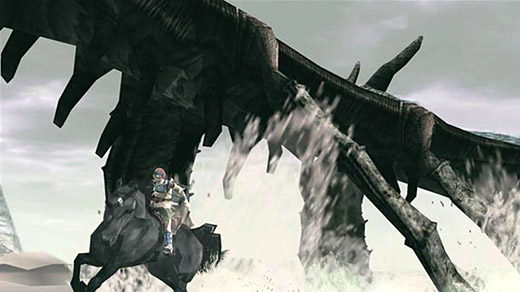 Going further, I felt that although the game's ending sequence is strong, the impact of the revelations following the destruction of the 16th colossus would have been ten times as powerful if the developers would have simply expanded on the story prior to it and let me learn a bit more about the game's world. I can't go into detail without spoiling things, but I can say that it's hard to feel deep emotion when there is little context to fully appreciate the significance of the game's events.

In addition to my impressions of the story, Shadow of the Colossus needed expansion of the main character himself. In ICO, the young boy and ghostly girl come to life by interacting with each other. Excessive dialogue or lengthy cutscenes are not necessary because the bond between those characters and player is created by the journey they all take together. In Colossus, the necessary structure for nonverbal exposition is lacking because the play is so narrow and limited in scope. The battles are strikingly monumental and a perfect centerpiece upon which to build, yet with so little surrounding them, other necessary aspects like empathy and motivation are not nurtured. In fact, I would even say that by being so focused the game undercuts itself and does a disservice to the experience as a whole.

There are a few technical issues that needed polish, but none of them are key in discussing Shadow of the Colossus' hard to define nature. At the core it could be summed up as a boy on a quest to kill sixteen fearsome monsters and return a deceased girl to life. However, I think it's quite clear that the game is more than that—or at least, it tries to be. When all was said and done I was left feeling conflicted and confused. On one hand, I knew I had just experienced an incredible expression of genius. On the other, I was empty, hungry, and thinking that Shadow of the Colossus was an unfinished masterwork with much more to tell.

Much like Dan, I admire and respect Fumito Ueda & Co. for taking such bold strides in uncharted waters, and it goes without saying that I eagerly await their next effort. In my eyes, I recognize Colossus as a significant, slightly flawed achievement—but I would still strongly recommend it to anyone interested in exploring the potential for videogames to be more than mass-produced focus-group entertainment. The final product may have fallen a bit short of the mark, but it is absolutely aimed in the right direction.Rating: 8 out of 10

To begin, this being my first post on Gamecritics and I want to congratulate you for trying to make a centre for the existing feelings that video games are important artistic works in need of examination, appreciation, criticism and theory. To expand upon my feelings, I offer this counterpoint to your review and to a certain extent, Dan’s review. I feel you missed certain points of the game or were neglecting to mention them to the readers in an effort not to spoil the game itself. The first main issue I had with your review was this: “By being warped… Read more »