Lots of polish and clever thinking go a long way 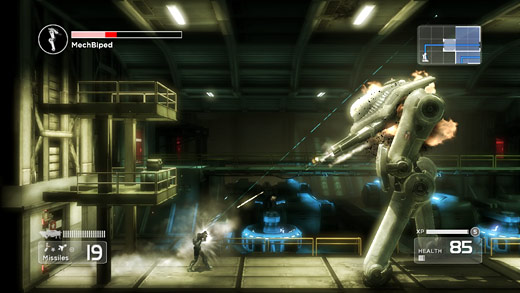 Where do you draw the line between homage and plagiarism? Since there's really nothing new under the sun, it's hard to fault anyone for creating a work that has a degree of similarity to something already established. After all, very few people truly invent; more often, it's a matter of iteration. That said, there is certainly a point at which someone can borrow too much. Metroid, meet Shadow Complex…

Rooted firmly in the long-established formula made popular by Samus Aran back in 1987, Shadow Complex stars a visually indistinct dude who's got to go into an underground facility and crack some skulls after his girlfriend's kidnapped. Along the way he picks up super-powered armor and ordinance to match, each new piece of found technology turning him bit by bit into an extremely able operative.

Although it adds twists like depth-of-field effects, rendering in full 3D, and a good amount of cut-scenes, there's no getting around the fact that Shadow Complex will feel extremely familiar to players who've spent time with other games in the so-called "Metroidvania" genre. It adheres firmly to all of the previously established concepts like requiring certain weapons to gain access to particular areas of the map, and encouraging players to explore every corner of the territory in pursuit of 100% item collection. It even contains the sort of late-game keyfetch that does nothing but waste time and annoy players like me.

Don't get me wrong, there's nothing bad about this formula. It certainly works. It's just that Shadow Complex doesn't bring a lot of new to the table. In fact, in many areas, it's a direct copy of 1994's Super Metroid. Some of the super-suit abilities and weapons feel like they were unabashedly lifted part-and-parcel out of Nintendo's franchise, and as someone who has played numerous games in this category already, I found it a little difficult to become fully engaged. Unable to shake the constant feeling of déjà vu, I was content to take the path of least resistance and simply put the game aside when it was done. After all, I could've sworn I'd already finished it years ago.

On the other hand, I certainly see a lot of value here for people who may not be as familiar with the formula. In fact, I could imagine Shadow Complex being fairly mindblowing to newcomers who haven't had the pleasure of playing through Super Metroid or Castlevania: Symphony of the Night. It's extremely polished, the visual presentation is clean and attractive, and Chair has taken pains to ensure that the player is always aware of where they need to go and what they should be doing. They've crossed all the Ts and dotted all the Is, displaying a clear mastery of the material. Add in the fact that it's available as a very reasonably-priced download, and the package becomes even more attractive. All things considered, it's definitely a win.

Taken at face value, Shadow Complex is a well-produced game in a popular genre that looks great, handles well, and trumps the vast majority of the competition on Xbox Live Arcade. Indeed, other Arcade developers will have to step up their efforts in a serious way if they want to compare favorably to the size and scope of what Chair Entertainment offers here. Looking a little deeper as someone who's been around the block, it's disappointing to see that so much of Shadow Complex feels utterly bereft of inspiration. It's certainly a job well done, but really, this job's been done before. Rating: 7.0 out of 10.

Disclosures: This game was obtained via publisher and reviewed on the Xbox 360. Approximately five hours of play were devoted to the single-player mode, and the game was completed one time. There are no multiplayer modes.

Parents: According to the ESRB, this game contains violence and mild language. The game features plenty of violence, both melee and (of course) firearms/explosives. Some combat takes place against robots, but most is against enemy soldiers. It's not especially graphic, but it's probably not one for the kids. There's no sexual content at all.

Deaf & Hard of Hearing: You won't have any problems. All spoken dialogue is accompanied by text, and there are no significant auditory cues. The game does a great job of displaying all information on-screen, so sound isn't a factor.