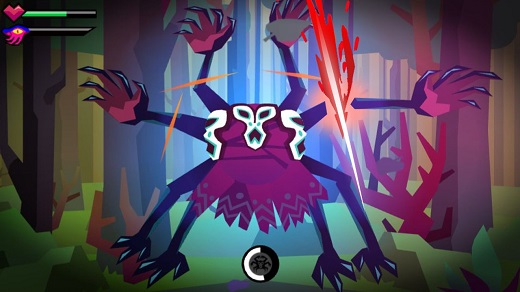 HIGH The art is elegantly amazing.

LOW It runs out of steam way too fast.

WTF Why are there so many locked doors?

It’s debatable, of course, but I’d say there are few studios who’ve never made a bad game. I can count them on one hand, and I listed DrinkBox Studios among that number. As one might guess, I’m a huge fan of their work—their two Mutant Blob titles were great, and Guacamelee was an incredible title showcasing bold originality in both design and gameplay.

I would’ve bet any amount of money that their new game, Severed, would’ve been another hit for them… and I would’ve lost that bet. Proving that there’s no such thing as a sure thing, I found Severed to be a surprisingly disappointing experience that doesn’t deliver the level of quality I’ve come to expect from this otherwise-stellar studio.

Severed doesn’t have much of a beginning, but enigmas have always suited me just fine. As the game opens, it’s revealed that the player is in control of a young woman who’s had her arm amputated at the elbow. Her family’s missing, she quickly receives a sword to hold in the remaining hand, and away she goes into a strange fantasy world.

The gameplay is presented in first-person, and the main interaction is in the form of touch controls. The player uses their finger to swipe on the Vita’s touchscreen, and the hardware is more than capable of registering short strokes, long strokes, and which direction the strokes are heading.

The first enemy encountered is able to block sword strikes, so it’s up to the player to decide when to swing from the left, when to go right, and to otherwise manage the flow of the fight. Ironically, this first enemy is one of the more interesting ones, and the limited types that follow aren’t as good. It starts off so promisingly, but then it just doesn’t go anywhere.

The biggest issue is that I kept expecting the swordplay to get deeper, but Severed chooses to go with quantity instead of quality. Instead of introducing more complex duels that require different strategies, fights remain relatively simple but make the player face several creatures at a time, often with an enemy in each cardinal direction.

When surrounded, a small meter at the bottom of the screen shows which one is about to strike next, so the player must turn to face that one, hit them to cancel their attack, and then either proceed to deal damage or turn towards another enemy and start working on them instead. It’s a dizzying race to spin around and smack whichever creature is about to strike next.

Unfortunately, this setup isn’t enjoyable. Instead of having rich, tense combat with dexterous sword use, it’s about managing multiple enemies at once, and it doesn’t evolve much. Repetition sets in with lightning speed and each new encounter is greeted with a heavy sigh. It seems like the core of a good idea is here, but more than a few developers have tried to marry touch controls with sword fighting, and results always come up short. I suspect it’s in the limited nature of touch itself—it greatly reduces the ways a player can interact, and generally things skew too simple.

When not in combat, the player is in a world of long hallways divided into small rooms, and there are far too many locked doors throughout. Not only are keys of several types required, there are also switches which change the day/night cycle, so some doors are unlocked during daylight, and some are only passable at night. Walking down hallways and searching for ways to unlock doors feels like something ripped straight out of 1993, and I kept waiting for more complex tasks, world building or narrative intrigue, but I didn’t see it in my time with Severed.

DrinkBox has always had fantastic visuals and that remains true here—their artists are always on point and I appreciate their work, but tight graphics can’t save a game which feels so shallow and underdeveloped. The swordfighting is far too tedious and I was constantly checking the map to see which way I needed to go, only to find that I’d usually have to double back and find a key I’d passed. This is not exciting stuff.

After my first few sessions with Severed, I had a hard time coming back to it and eventually shelved it unfinished, despite the fact that it’s a relatively brief game. It was just too much of a slog that failed to keep me engaged—pretty much the polar opposite of DrinkBox’s past work.

It pains me greatly to say it, but this one is a whiff for a studio with a previously-perfect record. For those who need something to play on the Vita, I would strongly encourage them to pick up either of the Mutant Blob titles, and Guacamelee is an absolute must-have. Those are genuinely great works, and despite my disappointment here, I still call myself a Drinkbox fan… I’ll just forget that Severed exists while I look forward to what they do next. Rating: 4 out of 10

Disclosures: This game was obtained via publisher and reviewed on the Vita. Approximately 3 hours of play were devoted to the single-player mode, and the game was not completed. There are no multiplayer modes.

Parents: According to the ESRB, this game contains violence and blood. Although there are dead bodies and the main character has a severed arm, the graphics are stylized and not too explicit. Slashing monsters is pretty cartoonish. There’s no salty language or sexual content.

Deaf & Hard of Hearing: No issues here. Dialogue is subtitled and no audio cues are necessary for play. It’s fully accessible.

Remappable Controls: No, this game’s controls are not remappable. It heavily relies on touching the Vita’s screen, and the only things that can be altered are sound volumes.

Hey folks, I appreciate your enthusiasm and I’m really glad that Severed has found fans — I think Drinkbox is generally great!

That said, I just didn’t like this game. It was just not my thing. Sorry!

How far did you get in the game, though? One of your complaints is the lack of variety in combat, but after each Boss (and at least once halfway through a dungeon) you get a power up that opens new options in combat, entirely new perk trees (well, the one found mid-dungeon doesn’t give an entire perk tree, but it does let have perks in multiple trees), and both mandatory and secret paths in the overworked. I just finished the second boss and I can now paralyze enemies, devour stat boosts, and use charged strikes. And if course, some areas… Read more »

Did you complete the first dungeon? After the first boss you get a move that can paralyze one (and eventually all) enemies, opening up an entire perk tree and multiple secret paths, and halfway through the next dungeon you get a charge attack which you use to break through certain obstacles and enemy armor. Also, FWIW, I find the first enemy to be one of the most boring in the game, especially since the next level of that enemy type can occasionally send two strikes in one turn and has a charged attack that can only be blocked by your… Read more »

Thanks for your comments Prince. Everybody’s got their own opinion, and I respect yours, for sure. Just a couple of things here… The game’s widely acknowledged as being about 5-6 hours long, so I saw about half. Apart from that, it says something about how little entertainment it was providing that I felt ready to quit before the end. Secondly, there’s no ‘lack of familiarity’ with the Metroidvania genre happening here. The fact is that the gameplay it provides was not enjoyable to me, and that’s not due to a lack of knowledge. Similarly, many Metroidvania games manage to deliver… Read more »

An interesting read. I was going to comment optimistically, hoping to help you see a new side to the game. Your first two major concerns seem to be that there is no depth/complexity to the combat and that there are a lot of locked doors. The former seems to be counterbalanced in part by your subsequent paragraph where you describe a complex system of managing priorities which I can only describe as depth. The latter I must say is a deliberate aspect of the genre, given that it’s part dungeon crawler part MetroidVania. Discovering secrets is key to the exploration… Read more »

This is one of the best comment I have read in a while….in fact it is better written and more thoughtful than the review itself.

I was starting to regret having sold my Vita when I learned about Severed. Looks like I wasn’t missing much.