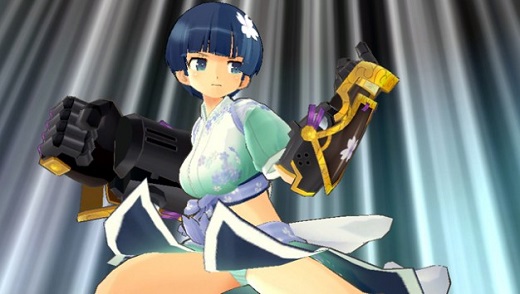 HIGH Fully grokking the combat's nuances after a few go-rounds.

LOW Getting corner-trapped into enemy combos. Also, blocking is useless.

WTF Why do so many girls wear band-aids over their nipples?

In my recent review of the vampire striptease Akiba's Trip, I couldn't understand why a project that should have been risqué ended up playing it so safe, undercutting itself into bland boredom. Coming from the same publisher, Senran Kagura: Shinovi Versus is a title that (thankfully) does not make the same mistake.

Although Senran plays a bit like a micro-scale Dynasty Warriors with visual novel chunks illustrating the stories of its characters, the first thing anyone will notice is just how much female anatomy is on display… And it's a lot.

To set the context for this review, I have no problem with sex in games, as long as the inclusion serves the identity of the game as a whole. Stuffing unexpected nude scenes into a random platformer wouldn't sit well with me, but Senran is obviously intended as a titillating, light-hearted romp starring pneumatic ninja girls. Not every game is right for every person, so those put off by this sort of content should absolutely give it a pass.

For those who aren't averse to such stuff, Senran Kagura: Shinovi Versus brings it. All of the characters are enormously endowed, and during the course of battle, clothing on all sides is damaged and eventually falls away. By the end of a match, at least one shinobi is left wearing lingerie, pasties, or sometimes nothing at all, though the vitals are obscured. Did I mention the close-ups? There's no doubt that the developers want these ladies on display, and they succeed.

On the other hand, there's more to Senran than skin—It was unexpected, but I found a surprisingly good exercise in small-scale design going on here. Everything about the game except the cast is bite-sized in scope, but the portions feel elegantly correct for quick sessions on a handheld.

As mentioned earlier, combat is vaguely reminiscent of Dynasty Warriors. When in a mission (either main campaign or sidestory) the player's shinobi is set loose in a small arena, and immediately swarmed by low-level thugs who exist only to be defeated. Before long, the opposing Shinobi appears, and things get hectic. 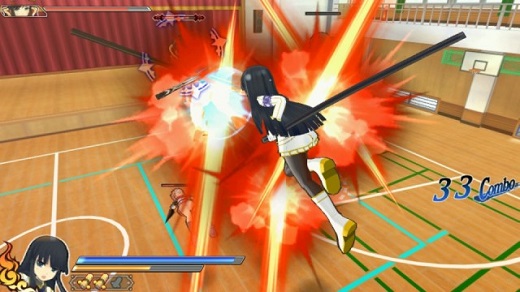 When I started, the first hour felt like an incomprehensible mashfest. The AI was pounding me with long combos, and the action was hard to follow. However, as I started to rotate through the different characters, finer details began to surface. For example, each character has a unique weapon, and while all combatants have similar controls, I grew to appreciate how differently they felt in action.

Yozakura uses mechanized gauntlets that pack a huge punch. She doesn't have the lightning-fast speed others do, but she makes up for it with brute strength. Minori is a girl who's crazy for candy. If she puts a lollipop into the bucket she carries, it builds energy over consecutive strikes, and the contents can be unleashed to stun a boss. Miyabi has a wicked charging uppercut, and summons spiraling hell-snakes to punish aggressive mobs. The list goes on, but everyone has a unique twist and the variations kept me interested.

Another aspect I appreciated was that there are three sets of powers depending on how much clothing a character has on. School uniforms are good for parrying and gaining extra EXP. Battle costumes extend combos and add buffing abilities. There's also a risky third (nearly nude) state called Frenzy, which grants a massive spike in offense and an equal drop in defense. The player has control over which mode they're in depending on the situation, and it adds a nice layer of strategy to what would otherwise be straightforward battles.

Despite these assets, the combat does need a bit of tweaking. I wouldn't have minded more moves for the characters, and the camera feels too close to the action at times. It's not a problem outdoors, but the viewpoint gets crazy inside buildings. I also noticed that certain characters are a bit overpowered thanks to player-freezing powers or nigh-inescapable combos. The devs provide a parry ability which can theoretically remedy that situation, but it's difficult to pull off.

Outside combat, players can indulge in some of Senran's supporting content. As expected, there are a number of different outfits and accessories to buy, and there's a whole department store's worth of lingerie options. As someone who enjoys playing dress-up with virtual characters, I was glad to see that the developers delivered a respectable amount here, though again, more would be better. I have no doubt that DLC is on the way, though.

Frankly speaking, it would have been quite easy for the developers to crank out a quickie jank-job with nothing to its credit but skin, but they went all-in to create something richer, and it paid off. Once I recovered from the shock and awe of the T&A, the thoughtful design and satisfying mechanics of Senran Kagura: Shinovi Versus had no problem keeping my attention. I'd recommend it to any Vita owner looking for fast action in short bursts, but I'd never let anyone watch over my shoulder, though… Rating: 8 out of 10.


Disclosures: This game was obtained via publisher and reviewed on the Vita. Approximately 14 hours of play were devoted to the single-player mode, and the game was completed. No time was spent in multiplayer modes.

Parents: According to the ESRB, this game contains: partial nudity, sexual themes, strong language and violence. Female ninjas fight, but the violence is pretty cartoonish and stylized. Pretty harmless. On the other hand, this game's T&A factor is off the charts. Every character is amply endowed and they all get nearly naked on a very regular basis. Not for little ones!

Deaf & Hard of Hearing: All dialogue is subtitled, and there are no auditory cues needed to successful gameplay. I spent the majority of my playtime with the sound completely off and had no problems at all. It's totally accessible.