Beach of the Dead 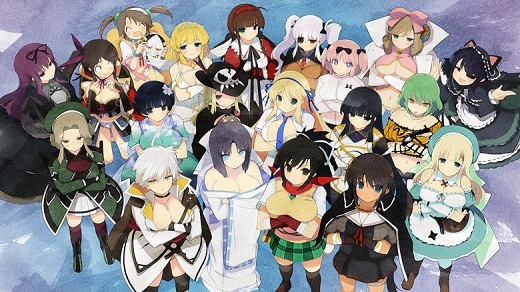 HIGH Spending more time with a great cast of characters.

LOW Finding and breaking hidden platforms to unlock side stories.

WTF The amount of jiggle on that granny.

Although Senran Kagura: Estival Versus plays a bit like a micro-scale Dynasty Warriors with a lot of visual novel to hold it together, the first thing anyone usually notices is just how much female anatomy is on display… And it's a lot.

The massive, bouncing breasts and flashes of nudity while characters magically change clothes Sailor Moon style is meant to draw attention and captivate with the power of curves. It does, and frankly, there's nothing wrong with that. The game isn't shy about its approach, and I'm a firm believer that not all content is appropriate for all people. The shame, though, is how many potential fans will be put off (or write it off) without knowing how much great stuff is underneath the bikini-clad veneer.

Senran Kagura: Estival Versus continues the story of rival shinobi schools, all attended by hyper-pneumatic women. This time around, the cast has been transported to another dimension, which strangely resembles… a tropical beach resort. Huh.

It seems like a silly setup created to showcase more skin (and that's partly the case) but there's more to it than that. This sunny limbo brings deceased loved ones back to life, so the girls who've lost family and friends over the course of the series are faced with unexpected reunions—some joyous, and others less so. The snappy script is largely light and jovial, but there are also some somber undercurrents and heavier themes. Overall, I was impressed with how well the writing jumped back and forth between the two seemingly disparate tones.

Apart from the overarching story, I'm absolutely a fan of these characters. Sure, they're very easy on the eyes, but the cast is huge and each one has her own quirks and personality. In fact, many of them have also developed various sorts of relationships with others over the course of several Senran Kagura games.

Mirai writes romance stories, and Murasaki will do anything for her to update the plot with a new installment. Yagyu and Haruka constantly fight over who gets to be close to Hibari, and the rivalry between Asuka and Homura drives each of them to be better. Getting to check in with old favorites is a real treat, and there are plenty of new threads to follow. However, one of the brilliant things about the game is that it does a great job of balancing its story and gameplay.

Just as I'd be getting near my fill of plot, Estival Versus would switch to combat. Each match only lasts a couple of minutes, so right as I would be feeling like I'd punched enough faces, the story side would swoop back in. Each element only comes into play for a short time before the other pops up, and by keeping each dose of content quick and punchy, neither ever drags on or outstays its welcome.

Speaking of combat, as mentioned earlier it's vaguely reminiscent of Dynasty Warriors. When in a mission (either campaign or sidestory) the player's shinobi is set loose in a small arena, and immediately swarmed by low-level thugs who exist only to be defeated. Before long, an opposing shinobi or two (or three) appear, and things get hectic. Currently sporting a selectable cast of around 38, returning characters have all received tweaks, new moves, and balance adjustments while the fresh faces each bring a new spin to combat.

Ikaruga is a serious one who wields a long katana and summons a magical bird to aid her. Shiki is a valley-girl vampire who can turn into a blood-red mist. Katsuragi's wandering hands and giant metallic boots are equally formidable, Kafuru wields twin water pistols, Renka uses her taiko drumming skills for offensive power, Hikage might be partly reptile, and the list just keeps going. Imagination is something the Senran Kagura devs never run short on.

It's also worth noting that there's a good deal of strategy in Estival Versus, thanks not only to the wide variety in characters, but because each has three sets of powers depending on what clothing they're wearing.  Standard clothes are good for parrying and gaining extra EXP, while shinobi costumes extend combos and add super attacks. There's also a risky third (nearly nude) state called Frenzy, which grants infinite combo strings and a massive spike in offense, but also brings an equal drop in defense. The player has control over which mode they're in depending on the situation, and it adds a nice bit of complexity.

My complaints about Estival Versus are few. The biggest thing is that many of the sidestories are locked until the player finds (and breaks) a number of items hidden in the environments. I'm not someone who enjoys hunting for things, and while the areas are all pretty small, it's an annoying change to the formula that slows the flow of play. My only other issue is that some of the brute force characters feel a bit too sluggish during combat. I'm sure there was a need to make sure the cast was fairly balanced, but it goes just a hair too far with a few of them. It's nothing major, but the fraction-of-a-second delays were something I noticed as a longtime fan.

While there's no doubt that Senran Kagura: Estival Versus won't be a good fit for a fair amount of people based solely on the amount of jiggle, there's no denying the quality that went into its design and production. The visual novel side is solid, the fighting is tight, and the balance between the two is just right. It feels like the perfect sort of thing to play on a Vita, and I'm always glad to revisit the cast. Spending time with these formidable ladies is a great way to kill an hour or two. Rating: 8.5 out of 10

Disclosures: This game was obtained via publisher and reviewed on the Vita. Approximately 12 hours of play were devoted to the single-player mode, and the game was not completed. (Still playing.) There are no multiplayer modes.

Parents: According to the ESRB, this game contains partial nudity, sexual themes, strong language and violence. Female ninjas fight, but the violence is pretty cartoonish and stylized. Pretty harmless. On the other hand, this game's T&A factor is off the charts. Every character is amply endowed and they all get nearly naked on a regular basis. Not for the little ones!

Deaf & Hard of Hearing: All dialogue is subtitled, and there are no auditory cues needed to successful gameplay. I spent the majority of my playtime with the sound completely off and had no problems at all. It's totally accessible.

Remappable Controls: The camera movement can be flipped, but the game's controls are not otherwise remappable.