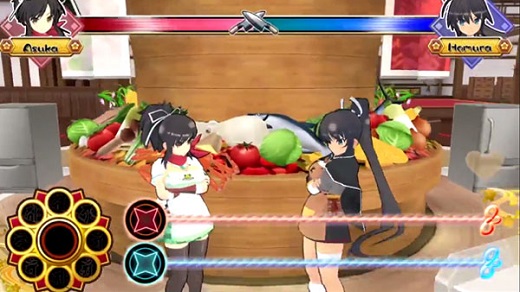 HIGH Hanzo's reactions to perfect meals are way over the top.

WTF Half the characters are held back as DLC.

In my review of the previous Senran Kagura game, Shinovi Versus, I make the case that not every game is right for every player. Just as we have genres in films, books and movies, the same truth that "one size does not fit all" applies just as equally here. With that in mind, I think it's safe to file Bon Appetit under the "super-mega fanservice" category.

To be clear, I don't say this as a judgment or condemnation. Quite the opposite, I'm open to games taking different forms and providing content to all types of tastes. However, just like I wouldn't put my five-year-old in front of the latest Eli Roth flick, people who aren't in the market for massively-endowed anime ninja girls should probably stay far away from this.

So, getting down to what Bon Appetit actually is… Well, to be honest, it strikes me as repurposed assets laced with a pinch of rhythm game as an excuse to deliver cheesecake to those couldn't get enough of Asuka, Ikaruga, Katsuragi, and the rest of the Senran Kagura cast last time around.

Story-wise, there's not much to mention. While Shinovi Versus actually had a complex and surprisingly well-told visual novel aspect to it, Bon Appetit goes lite. Under the guise of a competitive cooking competition (think Iron Chef with way more cleavage) the cast of ninjas have a cook-off… And that's basically it. There are a few chuckles here and there and the goofy writing has heart, but there's no great narrative aspiration.

For me, the judging section was a real high point because Hanzo's reactions are so over-the-top when he eats perfectly-prepared food—he dances around atop gigantic cakes, plays taiko on sweet corn, shoots rays of deliciousness from his mouth, and more. It's all absurdly comical. In fact, it's very reminiscent of the final scenes from Stephen Chow's God of Cookery (one of my favorite films) so seeing those sequences was a real kick.

As a kind of dessert, good performances are also rewarded with an extremely gratuitous shot of the defeated opponent laid out atop a bed of giant sliced fruit while covered in chocolate sauce and whipped cream. These scenes can be unlocked (of course!) for further viewing later, along with all the same dress-up and, uh, dress-down options fans would expect from previous entries.

If a player's goal is to get some ogling in, then Bon Appetit delivers bigtime. Super ultra bigtime. Ridicu-bigtime. On the other hand, those wanting gameplay commensurate with Shinovi Versus will be disappointed, and what's even more disappointing than the thin mechanics is that the audio side of this music-based game is absolutely horrible. The opening song is great (as is the animation) but the in-game tracks are garbage—it could easily pass for the kind of tinny, auto-play shlock that comes pre-loaded on electronic keyboards. It's baffling how bad the music is considering that it's trying to pass as a rhythm game, but it is what it is.

Also, I don't often bring up price points during my reviews, but it's worth noting that Bon Appetit is launching at $15—it seems like a relatively good deal for this much fanservice, but I soon learned that fully half of the cast is locked away as DLC. People who want every character will have to pay an additional $15. When considered in total, it seems like less of a value.

Cost aside, it's hard not to like the light-hearted crew of Senran Kagura and the series is intentionally aiming itself at a specific niche. I admire its focus and appreciate what it's doing as someone who wants to see the spectrum of game experiences continue to expand. It's not much of a rhythm game (or much of a game in general) but when taken as pure fanservice, it's pretty much everything anyone could ask for without doing an unfiltered Google search. Rating: 5 out of 10.


Disclosures: This game was obtained via publisher and reviewed on the Vita. Approximately 4 hours of play were devoted to the single-player mode, and the game was completed multiple times. There are no multiplayer modes.

Parents: According to the ESRB, this game contains: sexual themes, partial nudity and language. Long story short, this is a pure T&A show, so kids should not be allowed. There's definitely some innuendo and the bad language is pretty minor, but it's the visuals that will blow young minds.

Deaf & Hard of Hearing Gamers: Oddly enough, I find the game to be a bit more playable with the sound off. All dialogue is subtitled as well, so it's fully accessible. It's boring gameplay, but it's accessible.